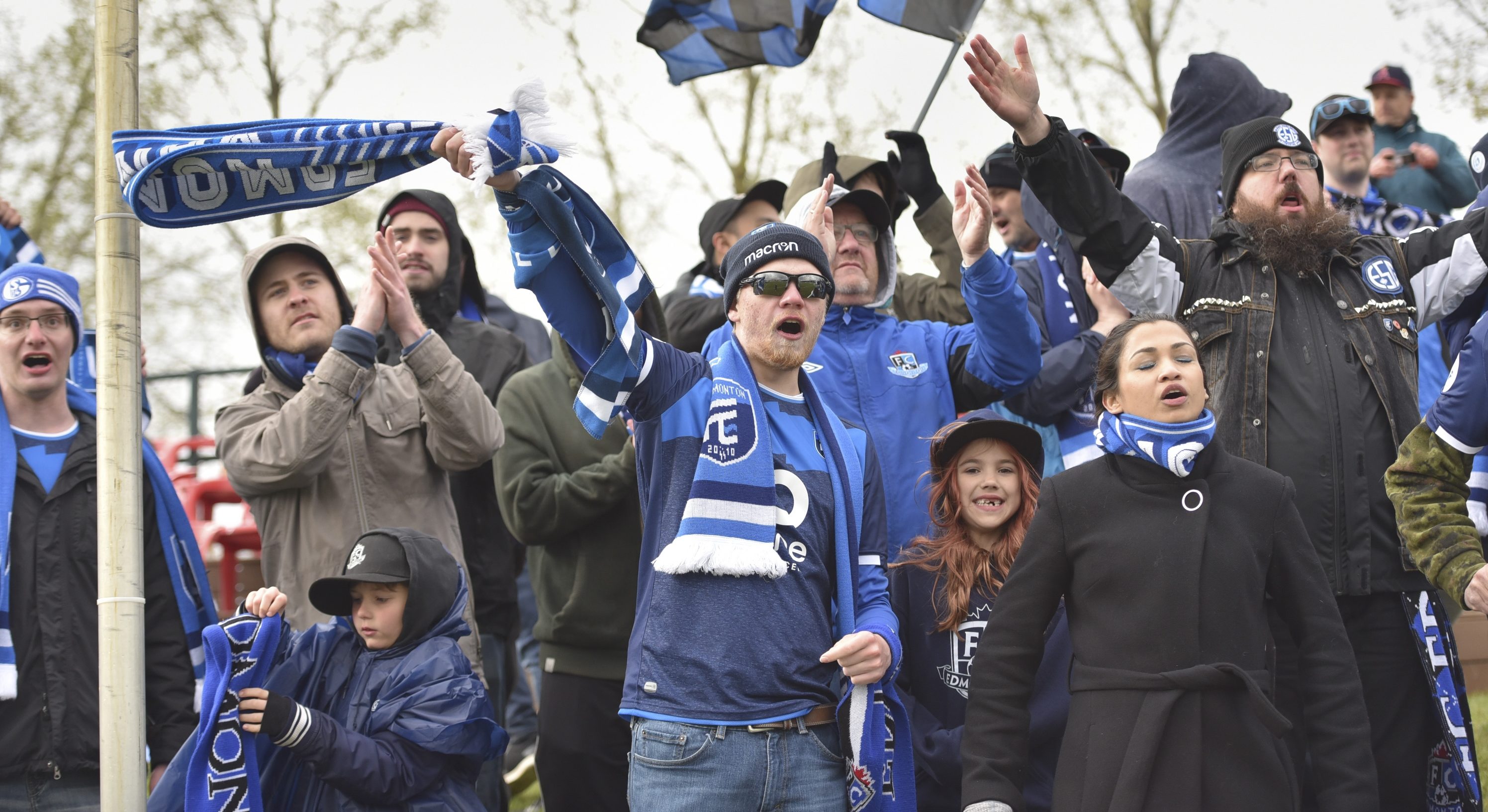 “I look at it this way: It’s the club’s responsibility to bring the casual fan to their first match. It’s the responsibility of the supporters group to ensure that the causal fan comes back when they see how much fun it is,” Walker told CanPL.ca

That’s how it happened for Walker, and he has made it his mission to also make it happen for others when it comes to spreading the word about his beloved FC Edmonton, a team he first started watching in 2014.

“I bought a seat, but then saw how much fun the supporter section was. So, the next game, I went down behind the net (in the supporters’ section), cheering my face off and having a good old time doing it,” recalled Walker, a 48-year-old veteran of the Army Reserve Force Service .

“The game after that, I was given a drum and have been the lead stick for the River Valley Vanguard ever since.”

Now, nearly half a decade later, Walker’s position in the River Valley Vanguard supporters group has become his second job – and like most jobs he often travels for work.

“I did a little bit of quick math,” he said with a laugh. “As the crow flies from Edmonton to each city, I’ve (travelled) 25,398 kilometres.”

In other words, Walker has taken Canada’s motto, a Mari usque ad Mare – He shall have dominion also from sea to sea, and from the river unto the ends of the earth – literally. Last week, Walker flew approximately 7,000 km from Edmonton to Halifax; the Wanderers Grounds was the final stop on his mission to watch FCE play in every CPL stadium this summer.

“It’s been a summer full of fantastic football,” Walker enthused. “I have some really great memories so far this year. We’ve broken five pairs of drumsticks and six drumheads. We’re having lots of fun and having lots of fun doing it.”

Having Edmonton in the league has been a long time coming for Walker and the rest of the River Valley Vanguard, but the years of waiting have paid off.

“When we had our year off (between the NASL and the CPL) a bunch of us supporters filled that time with academy matches in the Alberta Major Soccer League. We would go out and watch our academy play. A couple of guys are now on our squad, we watched them play when there was no footie here in Edmonton. The academy filled the void,” Walker stated.

Now that the void has been filled by the CPL, Walker couldn’t be happier. He even plans his vacation time around the Eddies’ schedule, admitting that he’s “taken a lot of Fridays and Mondays off.” Don’t worry, though, his boss has been cool with it.

However, for Walker, it’s more than just following his club across the country; rather, it’s about the people he meets along the way. Spending time with other fans at away games is what makes the whole experience worthwhile.

“At the pubs beforehand, we’re all friends, shaking hands, drinking beer, talking smack, having our banter. We’re friendly!” he said.

“Then we hate each other for 90 minutes. And, when we’re back at the pub again, it’s back to ‘good game,’ ‘glad to be a part of the experience you put on for your club,’ ‘why don’t you guys come out here in Edmonton for an away game?’”

The warm and welcoming reception he’s received in other cities has inspired Walker to reciprocate to travelling fans whey they’re in Edmonton to watch their club play.

He explained: “If you can carry that fun over to away days, and show the casual fan in another city, ‘hey they showed up here with 15 people and they’re making all sorts of noise and commotion. Holy cow! They’re having a party! I want to join them and get my club and do that too!’”

Walker’s summer has been one epic party. He was invited to do the ceremonial coin toss at a Valour FC–Edmonton match, he’s met all his counterparts across Canada, and he’s watched games in downpours.

He even has his own ranking of the best supporter groups in the league: “Lake Side Buoys (Pacific FC) are up there. And as much as it pains me to say it, Foot Soldiers (Cavalry FC) are up there, too.”

When you try to tell Walker, “you are truly the 12th man,” he instantly corrects you: “We are the 12th man.”

When asked what the CPL means to him, Walker didn’t hesitate to answer.

“It is a way to promote the game in Canada,” he stated. “It is a way to promote the younger kids, who wouldn’t have a place to play if this league didn’t exist, to get the experience necessary. When 2026 (World Cup) comes around, we’re not going to be held goalless like we were in Mexico (at the 1986 World Cup), because these kids now are getting the experience they need, in a league with actual play is happening, and where they’re getting minutes to hone their skills.”

Walker believes the CPL will play an important role in that – that growing the game and the culture around it is up to the people in stands as much as it is to the people on the pitch.