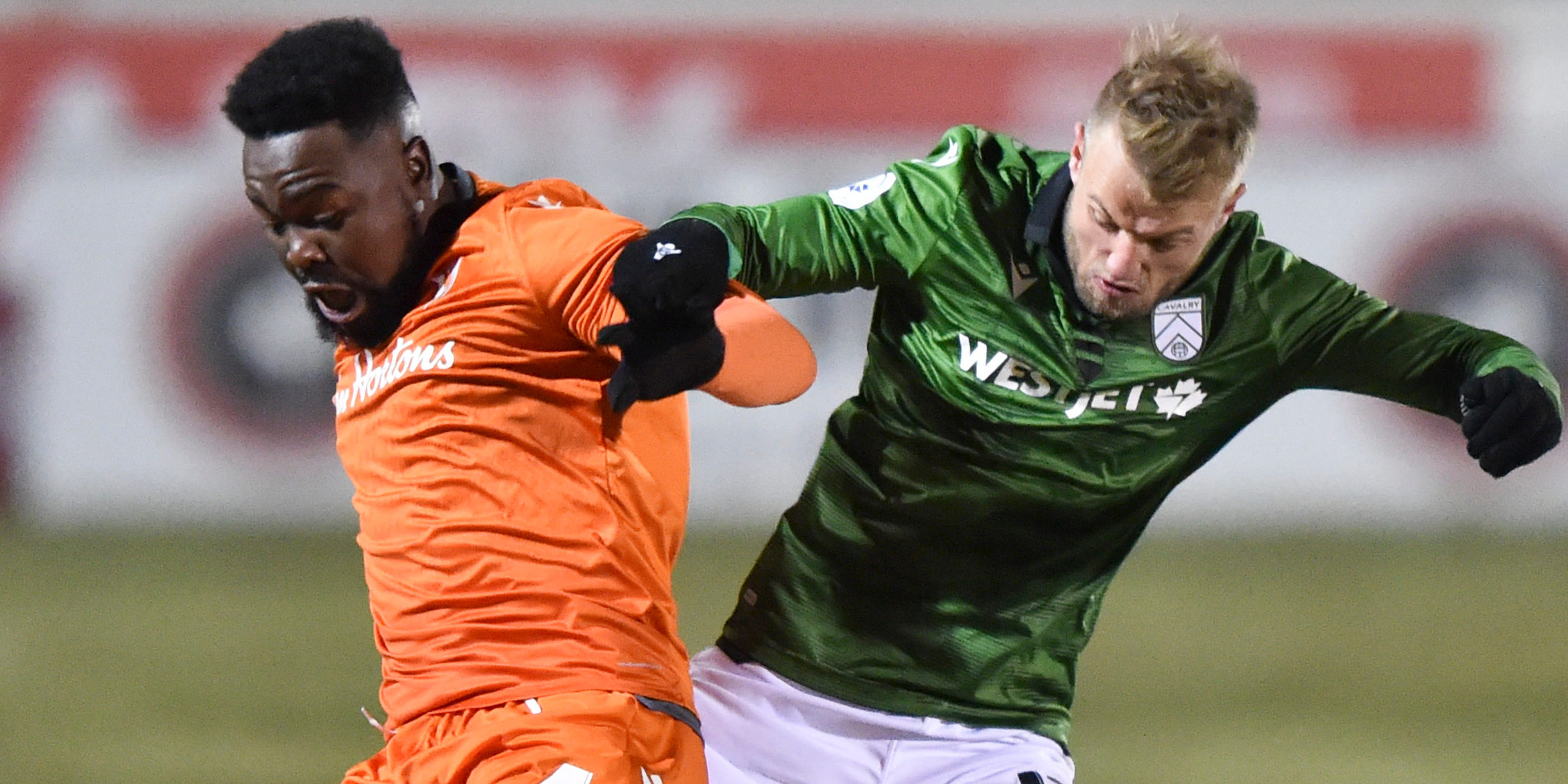 TORONTO – A few days removed from their win over Cavalry FC in the first leg of the Canadian Premier League Finals, Forge FC are feeling pretty good about the result.

Tristan Borges scored the only goal in a 1-0 win with a lovely strike that picked out the far corner just before halftime. Though no other goals were scored, there was plenty of drama left in the match, including a controversial red card that saw Borges, leading the Golden Boot race, set to miss the second leg should the appeal go unheeded.

However, on Thursday Forge received the welcome news that their leading scorer will indeed take to the pitch in Leg 2, after Canada Soccer announced its decision to overturn his red card.

“It’s a good result, it’s a place you want to be,” said Forge boss Bobby Smyrniotis on Tuesday after training. “You want to have a win coming out of the first game and you’d like to keep a clean sheet in the back. We’ve done that.”

“We had a very good performance, a dominant performance,” he added. “That’s good for the mood in the changeroom. We could have had another one, but you don’t look back on those.

“You see what we’ve done in these last few games against Cavalry, so we’ve got a lot of positives and we keep that rolling into the next one.”

For two Forge players, Dominic Samuel and Bertrand Owundi, who missed the first match through suspension – a red card and caution accumulation, respectively – it was a unique, not-entirely-pleasant experience cheering their side on from the stands, aside from the result.

“Yeah, it’s kind of weird,” admitted Samuel. “We played well and we won, the atmosphere was unbelievable, but any player would love to be on the field.

Echoed Owundi: “It’s not easy to have these kind of moments. It’s good to be on the pitch, but sometimes it’s not possible. I was happy because my teammates did well.

“If you don’t play, but the team wins, that is the most important.”

One can only imagine the roller-coaster of emotions a player goes through watching his team play in a match with such swings of mood.

“It was mixed emotions for that first half, but once we got that goal, I was really excited and very confident that we’d come out, maintain that, and get the win.”

Samuel took in each half from a different vantage point.

“For the first half I was in the stands with the supporters group, the Barton Street Battalion, in the corner,” said the defender. “I was there watching it with them.

“That was a pretty cool experience. I was trying to get the crowd as hyped as possible to cheer us on, to throw Cavalry off. It was good to see it from that perspective. For the second half I went up and sat in a box, watched it from there.”

And when the final whistle was blown and the two could rejoin their teammates, the mood in the room post-match was “unbelievable.”

“Everybody was in high spirits, especially Coach Bob,” added Samuel. “He was really impressed, happy with that performance. At the same time, everybody was like, ‘okay, that’s only half the battle.’

“We did well, but knew we had to have a good week of training this week, go in there, go to war, and actually get the job done. We’re only 45 minutes in of this final.”

Both he and Owundi are hoping to be involved in the second leg on November 2 in Calgary if called upon.

“I’ve been as eager as possible since I got the red card and I knew that I wasn’t going to play,” said Samuel. “Every day after that training, I’ve been wanting to get on the field, to play with the guys.

“I’ve been so excited to actually get to play in the finals, contribute as much as possible, bring what I can to help the team win.”

A week can both take forever and go by in the blink of an eye.

Forge had a day off after the first leg, but were quickly back to their regular training schedule in anticipation.

“Back at it and focusing as we do a regular week,” said Smyrniotis. “We usually have each day set up in a certain way: we work on some tactical things, review the last game where there are a lot of positives to look at, but we’ll also review some of the other matches we’ve played against them to make sure we’re spot-on and ready to go.

“It’s business as usual,” he continued. “The same way we prepared last week is the same way we’ll go into this one. Last week was an excellent week of training, it was a very loose group in the changeroom. You could see that we were going into the finals, but everyone was really feeling good about themselves.

“We’re keeping that same positive attitude going into this next one.”

The team will depart for Calgary on Thursday afternoon, where ATCO Field at Spruce Meadows awaits.

“It’s not as flat as it looks like on TV,” quipped Smyrniotis. “That surprised us in our first game: it looks like an excellent pitch, but there are some rolling hills in it at some points. I hope their grounds crew, who do an excellent job, are working on that pitch.

“And just the weather itself. The last game we played there it was a frozen pitch, was hard as a rock to step on, and that made playing football difficult. Not just for Forge, but for Cavalry. If conditions hold up, we’ll have a better quality football match coming ahead.”

That last trip out west on October 9 was indeed a frigid one, with Cavalry winning 2-1 and Dominique Malonga netting a brace.

Inclement weather aside, matches at ATCO Field have tilted in Cavalry’s favour with two wins to the home side and one to Forge back in June, when Bekker struck early.

They expect another frosty reception.

“I’m expecting cool weather – I heard it’s not supposed to be that bad, especially (midday). Hopefully the pitch is decent and not frozen like it was the last game we had there.”

A little snow never hurt anyone.