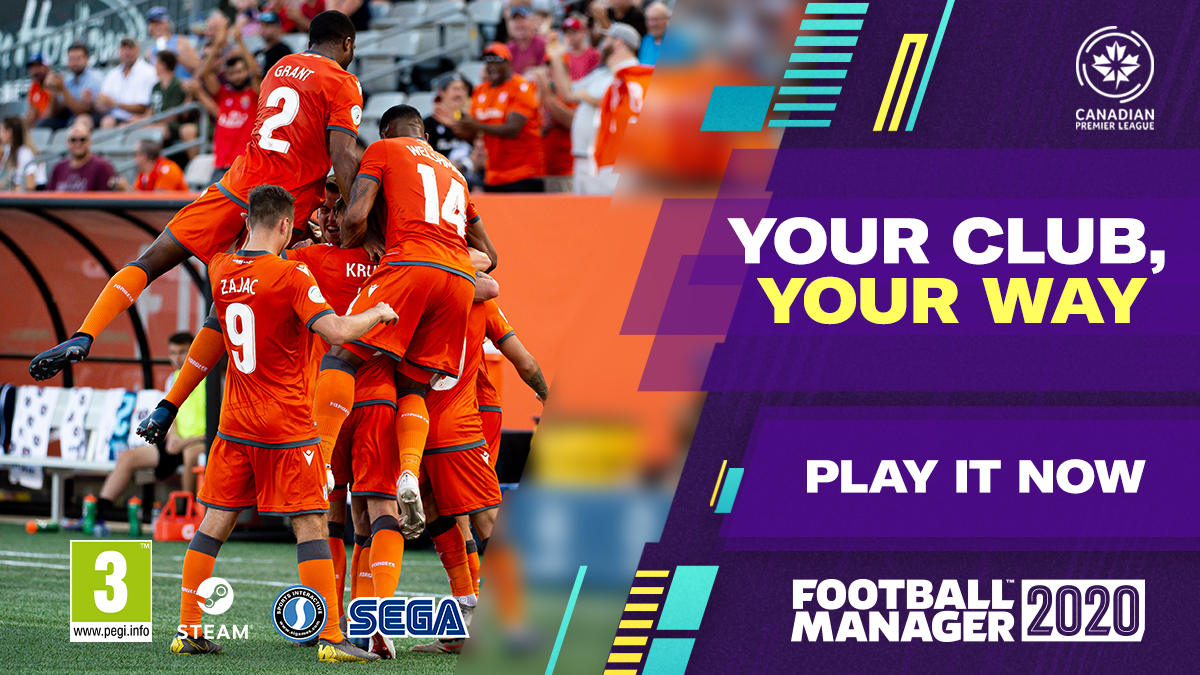 Everything you need to know about CanPL in Football Manager 20
2020-03-13
by
CanPL.ca Staff

Canadian soccer supporters had a lot to be thankful for in 2019.

The Canadian Premier League was born, Alphonso Davies made a big slash in European club football, the Canadian men’s team beat the U.S. for the first time in 34 years, and a Canadian league was featured in the latest Football Manager release.

It’s true! The CPL’s inclusion in FM20 came late last year and was a great cap on an exciting 12-month period of Canadian soccer (Sports Interactive added the league in a December update).

Here are some of the stories we published around the announcement, and some fun little things we noticed while playing.

4 CPL saves you should try in Football Manager 2020

Need a place to get started? Here are a few interesting paths you can take in your first managerial foray into the Canadian Premier League.

Perhaps you turn your attention to the West Coast and continue Pacific FC’s strategy of signing and developing young, local talent? Or maybe you try to turn around the HFX Wanderers ship and claim the North Star Shield in 2020? Your starting point is limited to seven places, but your opportunities are endless. || READ MORE

You thought 50 years was cool, wait until you see a century! We circle back to push even farther into Canadian soccer’s future; the Eddies keep winning, Toronto FC fail to win the CanChamp for almost 60 years, and we take a look at some of the best CPLers of all-time… in 2120.

Take a deep dive and let your mind wander. You’ll be glad you did. || READ MORE

A supporter’s 2,000-hour journey to bring CPL to Football Manager

Edward Hon-Sing Wong’s story is one of dedication. The York University PhD student spent thousands of hours building out a Canadian world in FM20 for others to download and enjoy. It became very popular, eventually leading to Sports Interactive adding the CPL to the league themselves. Wong’s patch is still available for download as he’s set to focus more on player research. Check it out. || READ MORE

‘Except this was real’: How a Football Manager YouTuber discovered & fell in love with CPL

WorkTheSpace’s Jack Peachman brought CPL to his nearly 100,000 YouTube subscribers with a grassroots FC Edmonton campaign last summer. As one of the biggest FM personalities on YouTube, WorkTheSpace discusses his love for the CPL, the strange way he discovered the league, and how he hopes his beloved Eddies fare in 2020. || READ MORE

There are countless pages, players, and teams to explore in FM20 – that’s why we boiled it down to five key points. Simeon Jackson and Iain Hume are available to be signed right out of the gate, Marco Carducci is earmarked as a must-buy, and a cheeky player-coach signing is up there too. || READ MORE

This was a good day, wasn’t it? Let’s take a look back to how Canadian soccer reacted to the Christmas Eve Eve news of CPL’s arrival in Football Manager – the first Canadian league ever featured in the game. Tommy Wheeldon Jr. seemed particularly happy, wasn’t he? || READ MORE