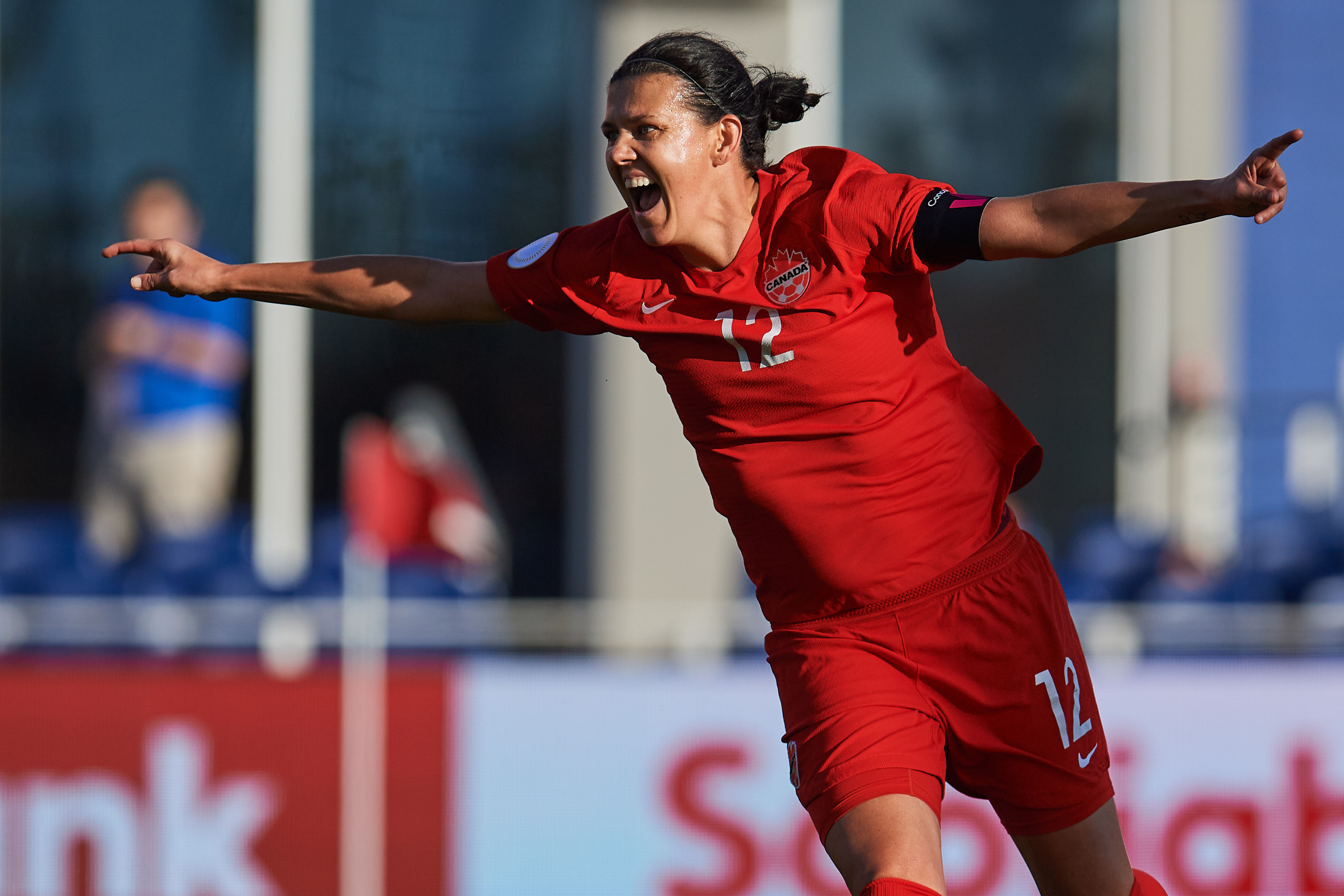 The iconic Canadian captain etched her name into the history books on Wednesday night when she scored twice in an 11-0 win over Saint Kitts and Nevis in Canada’s opening game of the Concacaf Olympic qualifying tournament.

With her brace, Sinclair, a 36-year-old native of Burnaby, B.C. now has 185 goals for the Canadian women’s team, moving her past retired American star Abby Wambach as the all-time leading goal scorer in international soccer, for both men and women.

Sinclair took 290 games to break Wambach’s record in an incredible international career that began when she debuted for Canada as a 16-year old on March 12, 2000 in a game against China.

Sinclair scored No. 184 from the penalty spot in the seventh minute of Wednesday’s game after being bundled over inside the 18-yard box. She added a second goal in the 23rd minute to erase Wambach’s name from the record books.

Relive tonight's historic match between #CANWNT and St Kitts & Nevis, where @sincy12 secured her name in history, scoring her 185th goal to become the Global Leader ?

“Obviously, I’m a very proud Canadian… I never could have imagined (I’d) reach the totals I have. For all the people back home, especially my friends and family who have supported me through my career, just a massive thank you,” Sinclair told reporters after the game.

Canadian coach Kenneth Heiner-Møller called it “a massive privilege” to watch history unfold from his spot on the sidelines.

“I’m so happy for her, and proud,” Heiner-Møller offered.

Even Saint Kitts coach Jene Baclawski, a 32-year-old American who took over the team last September, was full of praise for Sinclair.

“It’s a moment that me personally, and also the (Saint Kitts players) recognize for the historical moment that it is for women’s football. … It’s remarkable, I’m proud of her, I’m proud of what she’s been able to do, I’m proud of the precedent she’s set,” Baclawski stated.

Midfielder Desiree Scott, a long-time teammate of Sinclair’s, admitted she had tears in her eyes as she watched her captain’s record-breaking goal.

“Christine doesn’t appreciate what she’s done enough, and I’ve been able to see (it unfold) while playing with her for 10 years. To see it all go down tonight, it was just incredible,” Scott enthused.

After being mobbed by her teammates, Sinclair raised her hand and flashed a broad smile to acknowledge the sparse crowd – the 9,375-seat H-E-B Park Stadium was virtually empty. It was a shame that so few saw history being made, but that didn’t stop the tributes from coming in.

“To have scored an all-time international record goal haul, and to still be going strong, is truly outstanding. Christine’s achievements have made her an icon in Canada. She transcends the sport and is a wonderful role model for people across the country,” Concacaf president Victor Montagliani said in a statement after Sinclair broke the record.

Canada Soccer president Steven Reed added: “Canada’s Christine Sinclair is the greatest international goal scorer in the world’s most beloved sport. We have watched her grow from teenage star on the local grounds to international superstar who is adored around the world.

“For more than 20 years, she has served as a global ambassador to our nation, continually raising the bar for our sport through her achievements on the pitch and her humble actions off the pitch.”

Wambach took to social media to congratulate Sinclair after she broke the record, posting on her Instagram account, “Tonight, I am celebrating the honour of passing that record, that legacy of our beautiful game, to the great Christine Sinclair: world-record holder for most international goals – man or woman – in history. Christine: History is made. Your victory is our victory. We celebrate with you.”

Even Canadian Prime Minister Justin Trudeau tweeted out a message of congratulations to Sinclair.

Eighth in the current FIFA world rankings, Canada currently tops Group B at this Concacaf competition with three points. Mexico also defeated Jamaica 1-0 on Wednesday in Group B action, but Canada’s +11 goal differential gives them the edge as it stands. Saint Kitts and Nevis, ranked 127th in the world and making its debut in this tournament, sits in last place in the group.

Games come fast and furious in this competition – Canada will play five times in a 12-day span if it goes all the way to the finals. It was not a surprise, then, that Heiner-Møller rotated his squad and rested regular starters such as goalkeeper Stephanie Labbe, defender Allysha Chapman, midfielder Desiree Scott and forward Janine Beckie.

At the same time, Heiner-Møller injected some youth into his starting 11 with the introductions of defender Jayde Riviere and midfielder Julia Grosso (both 19 years old), midfielder Gabby Carle (21) and goalkeeper Kailen Sheridan (24).

The enormous gap in class between the two teams was clear to see from the opening minutes, and it was evidenced by the 7-0 lead Canada took into the halftime break.

The goal-scoring spree began early on when Sinclair converted from the 12-yard spot, firing her penalty attempt past a helpless Kyra Dickinson in the Saint Kitts net.

After Adriana Leon and Ashley Lawrence scored to make it 3-0 after 16 minutes, Sinclair scored her record-breaking goal midway through the first half, tapping home from inside the six-yard box off a pass from Leon.

“It was going through my mind, ‘don’t miss the net.’ Seriously, then when it went in, just a relief, to be honest, in the best possible way. There’s more important things to focus on now,” Sinclair said.

Moments later, Leon bagged her second of the match to make it 5-0. Riviere found the back of the net in the 40th minute with a rocket of a shot from distance, and Leon completed her hat-trick in the 43rd minute.

Perhaps in a show of mercy towards Saint Kitts, Heiner-Møller subbed Sinclair out of the game in the 47th minute and replaced her with 18-year-old forward Jordyn Huitema.

The goals continued to pour in for Canada, as Jessie Fleming controlled a ball from Shelina Zadorsky played over the Saint Kitts’ defence before slotting it home in the 54th minute.

Three minutes later, Riviere fed a ball into the centre of the box that Lawrence fired home to make it 9-0 for the Reds. Huitema got in on the fun when he scored a header off a corner kick in the 74th minute.

Leon scored her fourth of the game in the 80th minute, slipping between a trio of defenders on the edge of the box before firing past the Saint Kitts goalkeeper.

Canada’s next game is against Jamaica (No. 51 in the world) on Saturday, before it closes out group play next Tuesday vs. Mexico (No. 26).

NOTES: Group A consists of two-time reigning World Cup champions United States (ranked No. 1 in the world), Costa Rica (37), Panama (53) and Haiti (68). Costa Rica and the U.S. currently lead Group A with three points each… The top two nations from each group advance to the semifinals of this Concacaf tournament. Only the two finalists qualify for this summer’s Olympics in Tokyo… The semifinals and finals are scheduled for Feb. 7 to 9 in Carson, California.