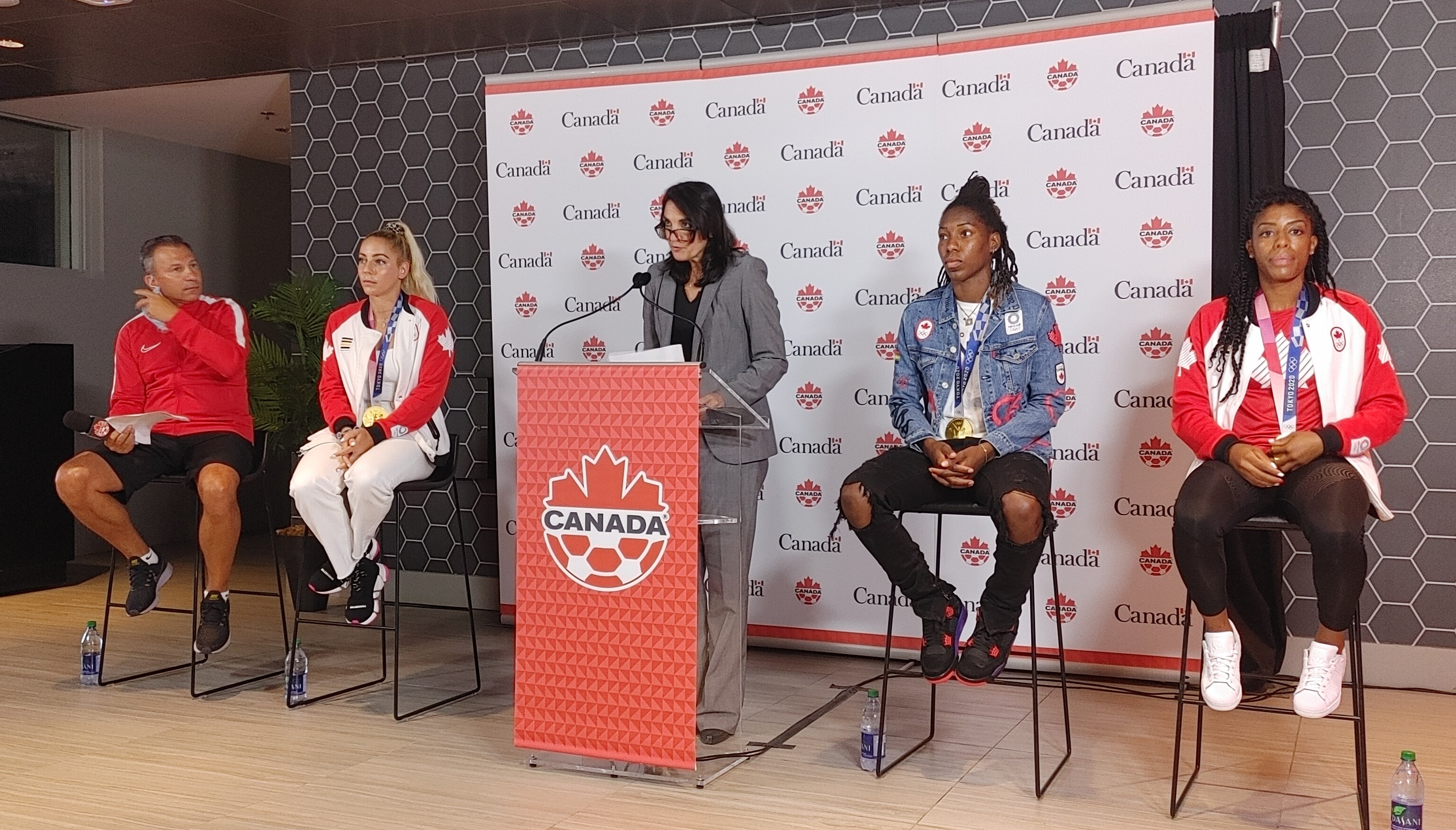 Canada Soccer held a media availability at BMO Field in Toronto on Tuesday afternoon, giving the chance for three Canadian women’s national team stars — Adriana Leon, Kadeisha Buchanan and Ashley Lawrence, as well as Canada Soccer President Nick Bontis — to speak to the media for the first time on home soil since Canada’s historic win over Sweden on Friday in the Tokyo 2020 Olympic gold medal match.

The players only arrived back in Canada from Tokyo late the night before — and proudly wearing their medals around their necks, answered questions from the media, and took part in photo opportunities on the pitch, where “#CANWNTGold” and “Olympic Champions” were prominently displayed around the field, and on the big screen at the north end of the stadium.

There was a joyous atmosphere throughout, and it would’ve been impossible to wipe the smile off the faces of the guests of honour — not that anyone tried to. The occasion was not lost on those in attendance; Canada had actually won the gold medal, and this gathering was to celebrate that, and tell the stories of those who had helped to achieve it.

It was also revealed that a cross-country tour to celebrate the gold medal is in the works. Cities, dates, and other details for that are still in the planning stage, but Canadians will get their chance to celebrate the biggest win in this country’s soccer history on a more personal level.

Canada entered Tokyo 2020 with the belief that they could come back with the gold medal. A lot was said about “changing the colour of the medal” after bronze medals in the previous two Olympics, and they achieved that.

“This medal right here here means the world, it means everything,” said Adriana Leon, who kept looking down to admire it. “It’s such an honour to bring this back home to Canada, and to arrive at the airport and see the excitement from our families and friends. It was such an amazing experience in Japan for the last couple of months, and we created memories that we’ll never forget.”

“It’s just such an honour, I remember the first time I played for Canada was right after the 2012 Olympics,” Ashley Lawrence recalled. “Watching that team inspired me to want to play for Canada. Fast forward to Rio and getting that bronze medal with a similar group was surreal,” she added, saying that she was hoping to inspire the generations of women’s national team players to come with this gold medal now in Tokyo.

As someone who collects sneakers, Kadeisha Buchanan says that collecting Olympic medals is a little bit more rewarding after picking up her second in Tokyo.

“It doesn’t compare to sneakers, not at all,” she joked when asked about it. “You can’t buy this, and that’s what makes this so priceless.”

Lawrence and Buchanan continue to win together, but aren’t satisfied just yet

Ashley Lawrence and Kadeisha Buchanan have known each other since they were children, and winning Olympic gold together comes after a lifetime of hard work and striving together for greatness.

“We grew up playing together, I just remember there was so many games where Keisha and I would just give each other that look like ‘alright, it’s time to turn it on’,” said Ashley Lawrence. “From early on we’ve held each other to such a high standard… it’s amazing to be on this journey with her. We’ve had a lot of conversations about our ambitions, our dreams, wanting to play professionally, wanting to represent Canada. To see everything coming to fruition is amazing, and I know the bar is set really high and there’s still so much more to come for both of us and for Canada.”

“It means a lot, growing up with Ashley,” Buchanan added. “Winning championships at U9, U10 — sometimes losing. In France going head-to-head, she wins sometimes, I win sometimes. So coming together and both being on that podium felt unreal to me, and I remember talking to Ashley like ‘this is our time to win together, let’s just push each other to be the best that we can be, for ourselves and for the team.”

Buchanan went on to make a big claim about just how good Canada can be, and sharing another lofty goal.

“The World Cup is next on the bucket list,” she said confidently. “I think the belief is there, I think we’re good enough to play against any team in the world.

“I also think we are the best defensive team in the world. Our next test is to be the best all-around team.”

Support back home gave Canada boost without fans in the stands

With restrictions at the Olympics preventing the friends and family of athletes from attending, and keeping fans out of the stands, there was a different feel to these Olympics than previous ones. The restrictions didn’t prevent Canadian supporters from showing their support online, of course, and while athletes at Tokyo 2020 were going about their business on the pitch, the support from back home was a boost as they strived for greatness.

“Seeing videos from teams we grew up playing for, and videos from young girls, and the messages that were pouring in… we felt that and I feel like that’s what pushed us,” said Ashley Lawrence. “Seeing the numbers of how many people were tuning in throughout the tournament, and how we grew as a team throughout, it was a really big reason (why Canada won), because of the support back home.”

Seeing messages from Canadians — who knows, maybe even future national team players — meant a lot for the players.

“I received a lot of messages from family and friends, and from little girls who drew a photo of a gold medal with my name on it, and that message alone means everything,” said Adriana Leon. “The future of Canadian soccer is bright, and it’s very exciting.”

Winning Olympic gold “is the inciting action to move us forward”

As well as the three players, Dr. Nick Bontis, President of Canada Soccer, was at the event, and spoke a lot about how much he hopes this gold medal win inspires young Canadians to take up soccer — and is a source of motivation for those already playing, like the bronze medals in London and Rio were for some members of the current team.

Gold, of course, is on another level.

“Think about how many Olympic champions there have been since the ancient Greeks started in 776 B.C… and I’ve got three of them right here beside me,” Bontis said, gesturing at the players on either side of him. “It’s a very proud day for me, very proud day for Canada.”

As a result of the COVID-19 pandemic, many fields and youth leagues across the country have been closed for over a year, but Bontis said that a priority for Canada Soccer is to get young players back on the pitch.

“This Olympic moment, I believe, is the inciting action to move us forward — to get our grassroots soccer that little punch they needed to get back and to get that momentum for all the little girls who want to play soccer again,” Bontis added.

Priestman and Herdman a “gift” for Canada Soccer

Bontis had a lot of praise for the two senior national team head coaches in Canada — who have both been committed to improving the sport in this country for years.

“We have a wonderful gift in this country, and that gift is Bev Priestman and John Herdman,” Bontis said. “We’re one of the very few football organizations on the planet that have integrated men’s and women’s football together — we can share resources, sports scientists, tactical identity — so we can have that infrastructure and we’re making that dollar stretch as much as possible, both for girls and boys who want to play for the national team.”