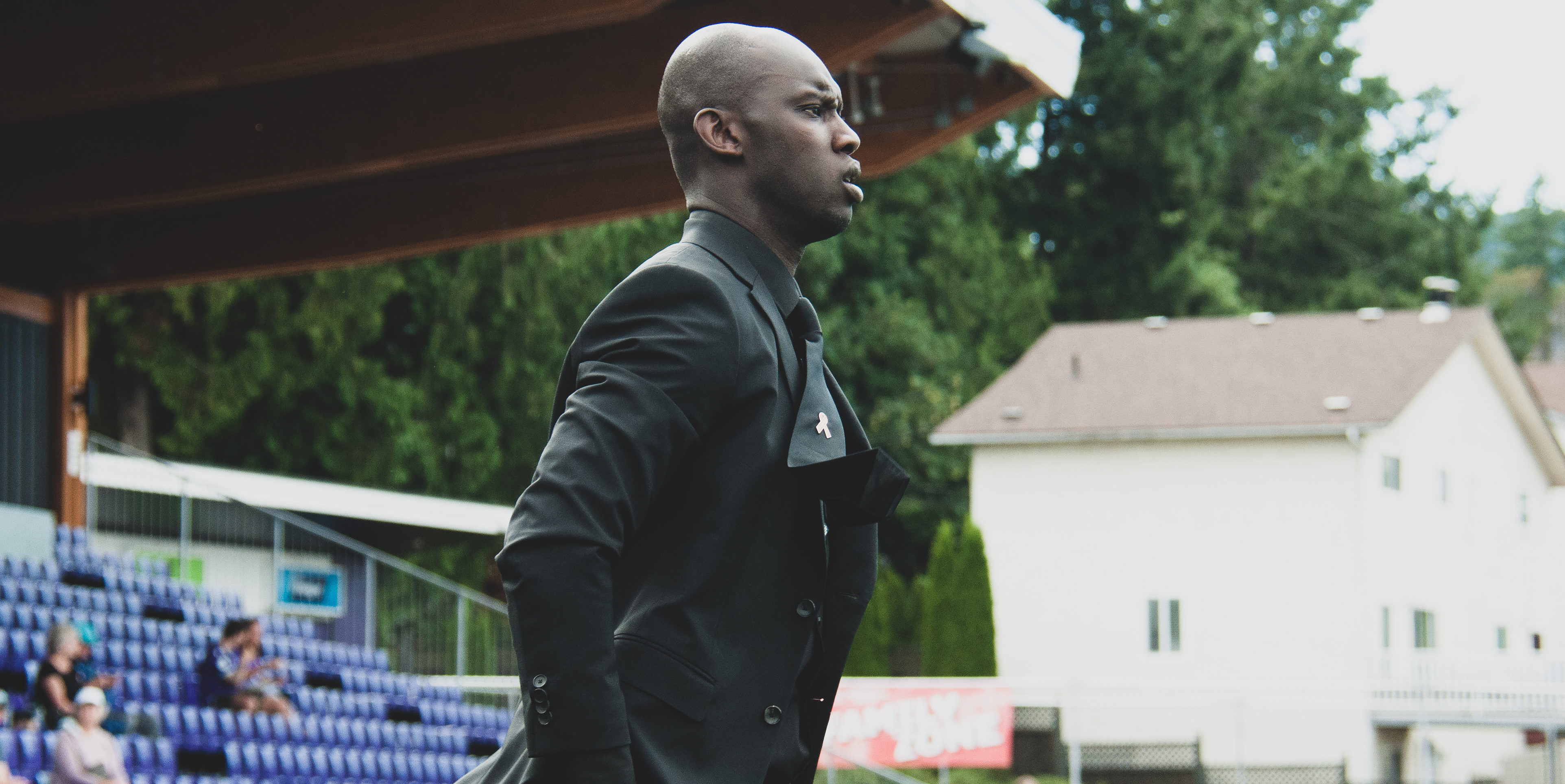 Just days before his Pacific FC team plays perhaps its biggest ever game, coach Pa-Modou Kah sat down with CanPL.ca’s own Kristian Jack on Beyond the Pitch to chat for a while about the long and winding road that’s brought him to this point. As the CPL side prepares for its Canadian Championship battle with the Vancouver Whitecaps — a club with which Kah, as well as so many of his players, has deep connections — there’s surely no better time to reflect on all that’s led to here.

“My wife said the other day, even after the loss in Calgary — I hate losing, but she’s like, ‘I don’t think you realize how far you guys have come in the last year and a half,'” Kah recounted in the show. “She’s like, ‘You should just take five minutes and try to comprehend all the things that you’ve done for the last year and a half.’ And when she said that, you’re kind of like, oh.”

Indeed, Kah and his Pacific side have had a remarkable rise since he took over as coach at the end of 2019. Now, they sit atop the Canadian Premier League standings, staring down a competitive knockout clash with the biggest club in their province. Kah himself has become an eminent personality in the CPL world, as well as one of its most outspoken advocates for equality and educating against racism.

Kah, of course, got his coaching start with the Whitecaps; after retiring as a player in 2016, he stayed with the club as a coach — first as an assistant with the reserve side, and later with the first team. It was Carl Robinson, then the head coach in Vancouver, who gave Kah an opportunity to stay in the game after his playing days. Kah, who first came to North America to play for the Portland Timbers, went to join Robinson’s Whitecaps — at the time, perhaps an interesting proposition for the Norwegian international, who had locked horns fiercely with Robinson on the pitch seven years earlier in a match between Norway and Wales.

In the course of his conversation on Beyond the Pitch, Kah went into extensive detail about his journey as a player — from leaving the Gambia at eight years old to move to Norway, to his path as a professional through Valerenga, AIK, Roda JC, and a few Middle Eastern clubs before arriving in MLS. Certainly, Kah has seen it all in football; he went on to recall stories of some of the great players he has shared a pitch with, from Paul Scholes to Zlatan Ibrahimovic, as well as some of the incredible stadiums he’s played at around the world.

Kah, the first Black player to represent the Norwegian national team, has also been sure to keep things in perspective in his time with Pacific, with his commitment to speaking out against racial discrimination — a topic he never shies away from discussing.

“Being the first Black person to represent Norway, it’s massive, but when you’re playing you don’t actually think on this moment,” Kah said. “You know just the milestone, you know that you wanted to play for the national team and now you got it, but you don’t even think about it until years later.”

He explained that, looking back, it’s important to him that he played a part in opening the door for other athletes and making progress:

“I do believe that education, compassion will always prevail because once we have that out there and people can understand that I’m not different to you, I just happen to be Black. That’s just what it is, right, but deep down you know we are all the same. You can I can sit here and talk for hours about life, about football, anything, and then after that we’re just two human beings that connected despite where they’re from. For me that’s what life is about.”

All of it, though, has led him to become the coach he is today at Pacific FC. Having learned much about the game of football in his career, Kah has brought it all together in his broad-minded coaching philosophy. Reflecting on the progress that has been made already at Pacific, he shared some of the mindset he’s brought to the club.

“I always say, for me, I’m always grateful to my players for allowing me to be part of their journey,” he told Jack. “Sometimes people get it twisted, because if you don’t connect well with your players as a head coach, there’s nothing you can do, because this game is for the players. So my job is trying to use my experience and my knowledge to help them, first as humans; that’s what I always tell them. This game isn’t about the game, it’s about you as a human being, because there will be a time when you leave the game, but when you leave the game you want to leave it as a better person.

“I was fortunate enough to play with some of them, and some of them saw me play, so I had a little advantage in that end, but still they’ve got to respect you because what I did as a player is not the same as I would as a coach, so I’ve got to earn their trust, and they have to allow me to coach them. For me, those things were the most important, for them giving me that trust but also them allowing me to install that philosophy and a vision for them so that we could all progress together and become better. That’s the group that we have, we have a family group that knows my first job is, do I make you better as a human being? Therefore I made you better as a player.”

Kah went on to add to that explanation, pointing out that it’s important to keep players in the loop with tactical decisions and changes, because otherwise it’s impossible to instill a comprehensive identity in a football club.

“I don’t toss somebody to the side and just don’t speak to the person,” he said. “I don’t believe in that. I believe that once you have the buy-in, they understand, because ultimately they have to go on the pitch and perform, so they have to be part of the process… Trust the process, that was the motto. And trust the process is who we are, what we want to achieve, and how we will obtain it. We don’t deviate from that, this is who we are. We want to play football the right way; I don’t care if we lose six, five to zero doing it, this is the way that we want to play.”

Along the way, Kah has learned from all sorts of people — Carl Robinson, certainly, as well as the many other coaches he worked with across Europe — to develop his football toolbox but according to him, much of his mentality stems from even before his football career. Kah’s emphasis on belief is something that was engrained in him from a young age by his family.

“That’s my mom and dad, but as well as my grandfather,” Kah said. “He was a top man. He was truly a top man, he gave me a lot of guidance. He was very clear when I was young, he’s like, ‘Listen, whatever you want to do in life, the first thing you’ve got to have is belief. You’ve got to have belief that you can change the world.’ And I understood it as a youngster, like he used to tell me, ‘You’re gonna change the world,’ and I’m like, I’m in Africa, what can I change? But it’s like, no matter where you are, always look forward. I’m right behind you. So that never wavered from me, he always installed it.”

This week, we’ll see just how much of that belief exists among the Pacific FC group in their greatest footballing challenge yet.

To watch the full Beyond the Pitch interview with Pa-Modou Kah, click here. Pacific FC will play the Vancouver Whitecaps this Thursday, August 26 at 10 pm ET/7 pm PT, live on OneSoccer.