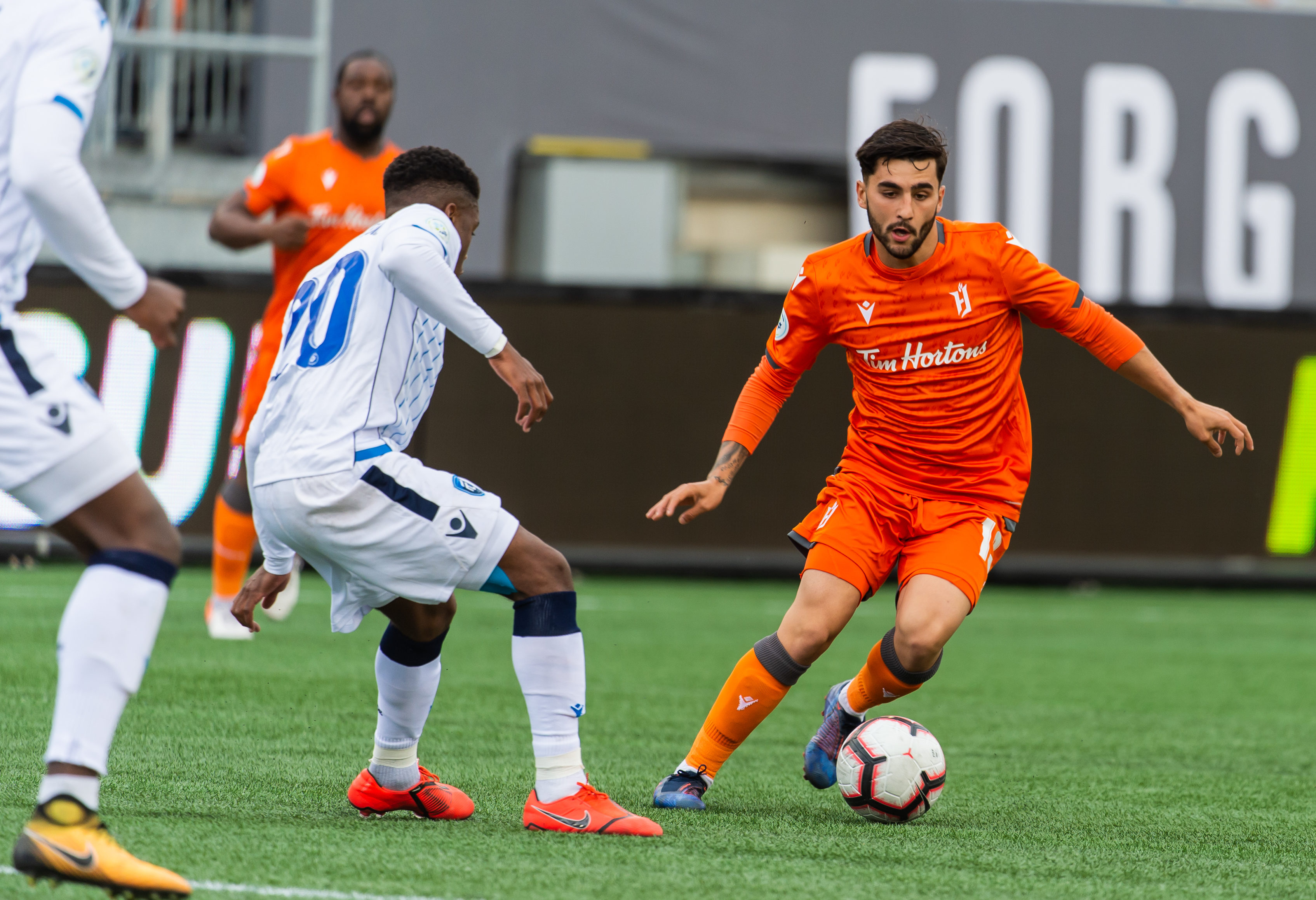 The Canadian Premier League’s first Golden Boot winner is its first make the move to Europe.

While Joel Waterman made history with his jump to MLS earlier this month, Borges’ move was always destined to be bigger.

Forge’s attacking maestro was a clear MVP candidate after Finals 2019  and had already locked down top scoring honours, taking home the Hunter as the league’s first Golden Boot winner.

Borges scored 13 times in 2019, and his goals were imperative in Forge’s march to the championship. Four in the Spring, eight in the Fall, and one in the Finals, and they all came off his left foot.

So, let’s travel back, and remember how the 21-year-old from Toronto captured the CPL’s first scoring title – and moved on to European football because of it.

Not many knew Tristan Borges’ name in April 2019. Anybody following the CPL, however, was well aware of who he was by the end of May.

It started with this short-range finish in Forge’s third home game, as Borges equalized against Cavalry. Defender Jay Wheeldon completely missed Borges’ step right around him, and the budding Forge star transferred Emery Welshman’s pass into the far lower corner of the net.

Borges’ first marker was the only one he’d score all year in a match that Forge lost. Nico Pasquotti’s goal won that early meeting for Cavalry, but from then on, a Borges goal meant at least a point for his side (and three points on all but one other occasion).

After that defeat, Forge embarked on a road trip to Winnipeg, and then York Region. Borges scored in both. He swiped it over the Valour defence from well outside the box to win in Manitoba. He, along with the rest of his team, outlasted the rain to put the dagger in their second 905 Derby win, as he fired off a laser after Chris Nanco’s set-piece dummy.

So, Borges returned home at the end of the month as the CPL’s leading scorer, and promptly continued his tear at Tim Hortons Field against FC Edmonton. He won himself a penalty, and he scored, obviously. That bottom corner was kind to Borges this year.

For those playing along at home, that’s four goals at the end of May, all banked in the month’s final four matches.

Borges went a little quiet as the days got warmer. As he struggled with injury, he stayed off the scoresheet for four straight league games (and Forge suffered, losing twice).

He couldn’t be held down for long, though. A week into the Fall campaign saw Borges return to form in style. He scored the go-ahead goal when Kyle Bekker (as he so often did) spotted him in acres of space, and he found the low corner at the far post once again. He completed his first (and only) brace of the season half an hour later, when Kadell Thomas set up a tap-in with a pass across goal.

It was during this early juncture in the Fall season when Borges reintroduced himself to the league, but it would be the following week that he’d truly turn heads.

These don’t come around too often.

With his side running rampant over HFX Wanderers in the first half, Borges jogged to the corner at Tim Hortons Field to stand in front of the Barton St. Battalion. Did he have this in mind yet?

Perhaps. Or perhaps he didn’t see any targets he liked in the box. Whatever it was, Borges bravely chipped it with his left foot, and he watched the ball sail over every head, over Jan-Michael Williams’ outstretched arm, and land a hair inside the far post.

Tim Hortons Field is a notorious wind tunnel, but there’s a tremendous amount of skill required to pull off the Olimpico. With his seventh marker of the year, Borges submitted his claim for the goal of the year.

Times got tough for Forge in August, with their Concacaf League run giving them little energy for their CPL efforts. Borges, again, battled injury and thus made no progress in his Golden Boot conquest in late summer.

With September came a new perspective on things, though, as Forge began seriously eyeing a spot in the CPL Finals. They met their 905 Derby (and Fall title) rivals York9 on September 9, and Borges found the breakthrough in the first half, scoring with his bread-and-butter: a Kyle Bekker through ball, and a low shot to the far goalpost.

He scored again three days later with a penalty at Valour. Then again at home against HFX, completing a late two-goal comeback against a defence that completely failed to mark him in the box.

Borges did it again the next week against Pacific FC, finishing Chris Nanco’s work for him with a cool top-of-the-box finish, locking up Forge’s place in the Finals with an insurance marker. His Fall season deluge came to a close in early October, when he slotted a late penalty to bury York9 once again at Tim Hortons Field.

Several players around the league continued to nip at his heels for the scoring crown; Easton Ongaro and Terran Campbell couldn’t stop scoring in the summer, but neither could Borges once September began. Dominique Malonga, just days after we at CPL Editorial counted him out, put a brace past Forge to pull within one of Borges’ 12 goals.

So it was that the league’s top two scorers converged in the Finals, with just one goal to separate them.

When he woke up the morning of October 26, Tristan Borges surely had no idea what part he’d come to play in Leg 1 of the CPL Finals. There’s no better place for spectacle, though, than the league’s grandest stage, and only the greatest players can oblige.

It was a roller-coaster of an afternoon, with the nadirs of a missed penalty and a red card bookending Borges’ most meaningful goal yet on the brink of halftime.

What a goal it was, though. Dominick Zator’s giveaway. Chris Nanco’s turn on the touchline (was it out of bounds?). As he did all year, Borges didn’t panic when two Cavalry players closed him down at the top of the box. No, with all other options taken away from him, he launched a rocket through four defenders and past Marco Carducci, bulging the far side of the net.

Thirteen goals, and Borges had the aid of his teammates in keeping Malonga from catching up. The Congolese striker had two shots in Leg 2, neither on target — he sent one open header off the dirt and over the crossbar.

Thus ended Borges’ odyssey in 2019. He entered as an unknown amateur, and became a household name in the collective minds of Canadian soccer fans.

Now, he’s bound for Europe as a full-fledged professional with a Player of the Year-level resume.