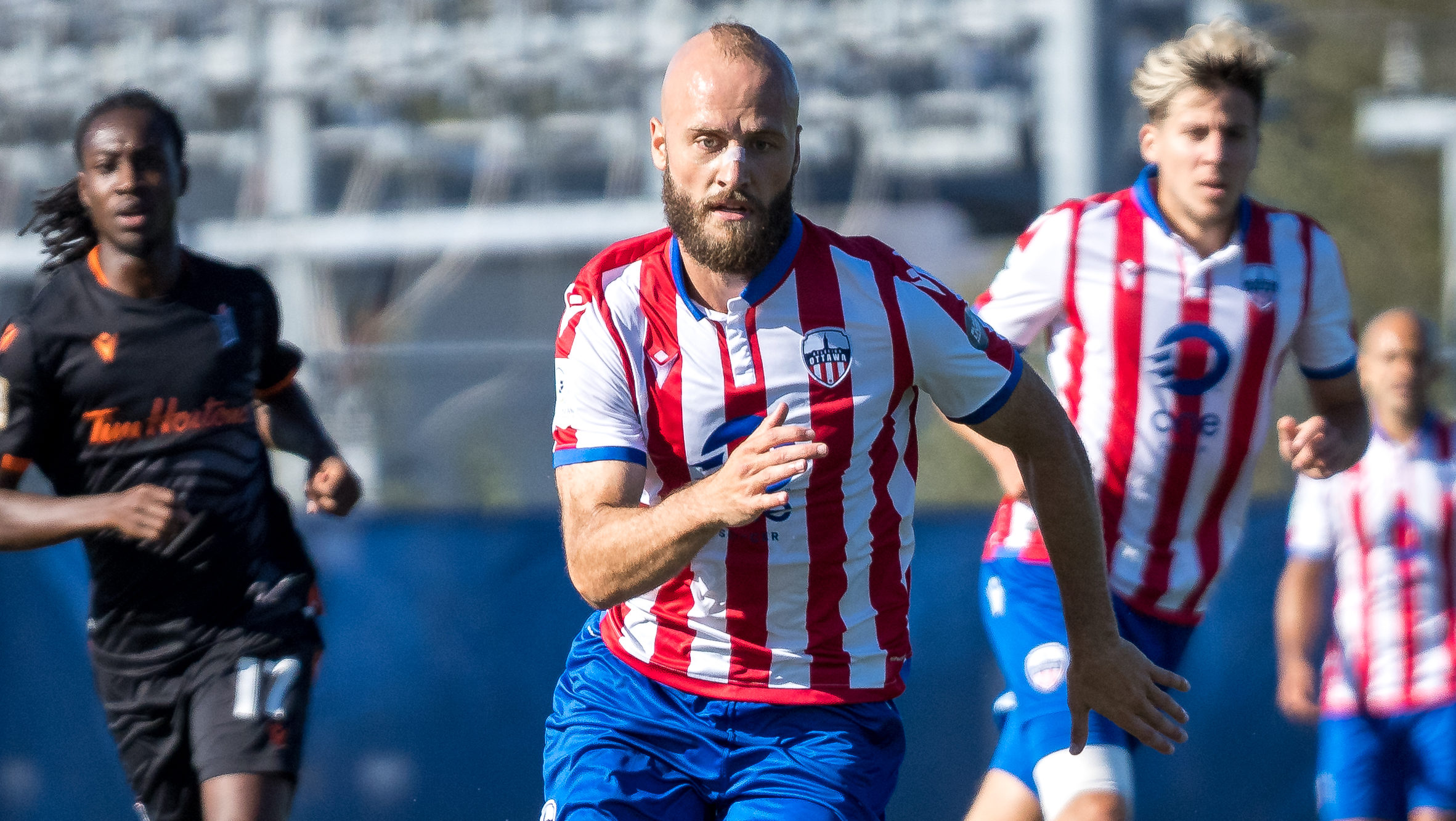 Atlético Ottawa’s Milovan Kapor is well-travelled as far as Canadian soccer players go, with a trip to Prince Edward Island to compete in The Island Games being the latest and strangest place his career has taken him.

“Absolutely it is the weirdest place I’ve played. Without a doubt,” Kapor told CanPL.ca as he recounted his last-minute signing with Atlético this summer.

Perhaps it’s PEI’s lack of professional soccer history that seems so foreign to Kapor, who has played in some far-away places, with Belarus, Uzbekistan and Slovakia being the first countries to stick out on his Transfermarkt page.

Despite being a Toronto native, the 29-year-old never intended to suit up in the CPL right away at The Island Games, especially with his wife expecting their first child.

Kapor first reached out to Atlético’s management when the team was unveiled this past February, only to find himself stranded in Canada months later due to COVID-19 restrictions. Unable to join his wife in Slovakia or from joining his Uzbekistani team FC Buxoro, Kapor picked up the phone again and he ended up putting Ottawa and the CPL on his CV.

“I wasn’t really planning on coming back home and playing in Canada in the near future. So that’s what I told them – ‘we’ll keep in touch… we’ll see what happens’,” Kapor recounted. “I took the opportunity to go with Ottawa and was super happy that I did.”

Atlético CEO Fernando Lopez kept in close contact with Kapor right up until July when the CPL expansion club was desperate to build out a team for the yet-to-be-announced Island Games. Kapor eventually agreed to terminate his contract with FC Buxoro and quickly made his way to Ottawa. Kapor went on to make six appearances for Atlético at The Island Games, missing all but one match due to a red card suspension.

“I had a week and a half with the team,” Kapor said, recounting a frantic few days of training in the nation’s capital. “I know Ottawa was waiting for two foreigners [Tevin Shaw and Bernardinho] as well to see if they can get them in. With me, it was sort of the last-second thing.

“It was pretty difficult just with the number of games and not being able to have preseason matches.”

Born in Toronto to Serbian parents, Kapor left NCAA competition at the University of Maryland, Baltimore County to ply his trade in Europe, taking on playing roles in fifth-tier Spain and Israel, as well.

Kapor also comes from a completely different era for Canadian players, and his resume shows it. Graduating in 2013, the centre back was forced to go to Europe to play professionally as opportunities at home were scarce. With Ottawa, Kapor worked with a handful of first-time professionals and teenagers given an opportunity not afforded to him just a few years ago.

“When I finished university, you were given the option to try USL… maybe grind it out with the team in the MLS,” Kapor explained. “For these guys, it’s so much different. When I look at a player like Jarred [Phillips] who came in on their first professional contract [with Ottawa] and played as well as he did, you can’t help but get excited for what the CPL can give players like that.”

Kapor gives off the vibe of a patient veteran with stories to tell, something he attributes to the people he’s met along the off-beaten soccer path he’s followed.

“It’s been the people that I’ve met along the way that got me these opportunities,” Kapor began, reciting a long list of teammates, agents, and friends that brought him through Europe, starting with Spanish side Cádiz in 2014.

“I’ve left a good mark and an impression that lasts. That’s one thing that I’ve always tried to do in my life – make sure the person comes first before the football. If you show your true character and you show what kind of person you are.”

Whether Kapor returns to Ottawa for the 2021 season remains unknown. Now in Slovakia with his wife and newborn son, the newly-minted father is taking things one step at a time.

“I can’t give a concrete answer, to be honest,” Kapor said. “It was a great experience and CPL is definitely one of my options for sure. If I do come back to the CPL it will have to be with Ottawa. Just because of how great of an experience I had over there with everybody. But right now it’s a little too early.”