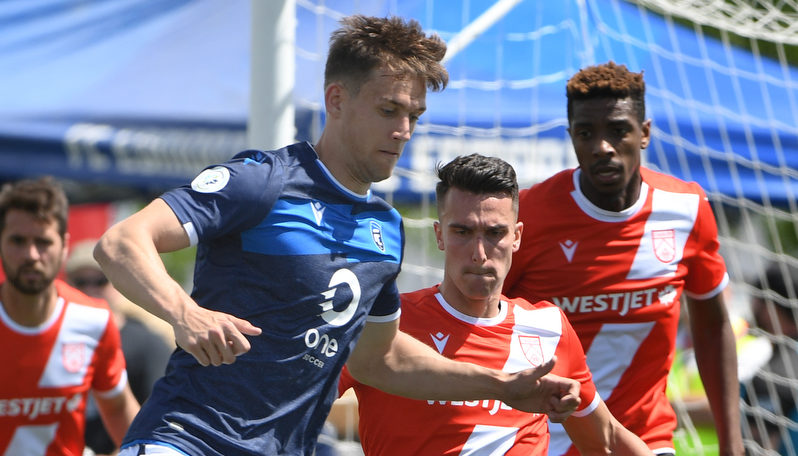 Amer Didic (L), and Dominick Zator (R), battle for the ball. (Photo: FC Edmonton).
By the numbers: Didic earns call up ahead of Zator, but how do they stack up?
2019-10-01
by
Marty Thompson, Digital Content Editor (@martythompson_)
News

FC Edmonton’s Amer Didic became the second Canadian Premier League player to earn a call up to the Canadian men’s national team on Tuesday, getting the nod a month after his Albertan rival, Marco Carducci, became the first. October’s CONCACAF Nations League camp won’t be Didic’s first rodeo with Canada, having spent time in a 2017 camp under Octavio Zambrano.

Didic was, however, one of several CanPL centrebacks that were potential targets of head coach John Herdman heading into their crucial CONCACAF Nations League match against the United States at BMO Field on Oct. 15.

Forge FC’s David Edgar has a history with Herdman and the national team; York9 FC’s Luca Gasparotto, same as Didic, has some national team experience, too.

But the main comparison can be found just down the highway in Calgary: Cavalry’s Dominick Zator. Another younger option at 24, Zator has been omnipresent in Cavalry’s Spring and Fall campaigns, emerging as a leader on one of Canada’s best-performing domestic outfits.

“Zator in Calgary was on our wider squad list, and again, he’s a player that’s caught the eye this season,” Herdman told reporters following the squad announcement. “But for us, we typically play with a back four (and) two centre backs. Zator has been playing in a three (at Cavalry) and at fullback. He’s progressing and he’s someone we’ll continue to track.”

So with two promising CPL centrebacks on Canada’s radar, playing in positions Canada isn’t exactly deep at, here’s how they stack up using statistics with Sportlogiq.

Stop the ball — it’s what centrebacks are paid to do.

In this realm, Zator presents one of the most all-rounded defensive games. In the top half of every defensive category, the six-foot-two Calgarian has proven to be a good tackler, mobile, and versatile in several different roles – including outside as a fullback.

Didic, meanwhile, stands out as a more stay-at-home defensive option. The Edmontonian is your classic hawk-in-the-box, averaging an astounding five clearances a match and using positioning to record key blocks and push the ball out wide.

Zator would appear to have a slight edge in this category. As a more aggressive defender, he’s apt to record more successful tackles and interceptions than Didic, doubling the CPL average of successful ground duels per 90 at 2.39, according to Sportlogiq.

Six-foot-five Didic offers some of the best passing ability of any centreback in the league. More than comfortable with the ball at his feet, Didic offers a useful second pivot to FCE’s backline.

His passing range is the best in the league, too, completing 71% of his long passes. The 24-year-old’s long passing was on display in the latest of three assists this season, picking out Easton Ongaro with an early cross – from a spot that made him look more like a winger than an oversized centreback.

Zator’s passing stats aren’t as impressive, hovering around the league average. He is, however, much more of a threat on attacking set-pieces as a front-post runner looking to tip balls down. Both defenders rank in top 95th-percentile in aerial duels won, too.

Didic has a clear advantage when it comes to possession, emerging as one of the best passers in the CPL regardless of position.

Ah, time for the debate. As always, stats tell a story … and sometimes they need a little sprinkle of context.

Didic has made his fair share of trials in 2019. Injuries, compounded by a couple own goals (including one this past weekend) have made it a less-than-ideal summer for the big man. Of course, would his performances look better if the Eddies were top of the table? Probably. And, has Zator had an easier time defending against CPL sides due to his place in the league’s most dominant Spring side, and, therefore, unfairly appears as one of the league’s best defenders? Again, perhaps.

The one thing Didic has going is experience with the national team, having been called up for a pair of friendlies in late 2017. Carducci, the last CanPL call-up, had a similar background with the men’s team. Is a previous camp invite all that’s separating Zator from the national team? Likely not. But it would help.

But if John Herdman priotiorizes passing and physical dominance in his centrebacks, he has found his man. Didic is one of the best passers in Canada’s pool of defenders and a (literal) massive defensive asset.

Another Canadian Premier League player with Canada … a big accomplishment for a big man.

Of course … there exists the possibility that both Didic and Zator are called up together, a prospect Didic said he’d fully embrace.

“For me, that sounds brilliant,” Didic told CanPL.ca. “Even though there’s that Edmonton-Calgary rivalry, at the end of the day, you’re competing for your nation. Whoever plays, and whoever you’re playing with, it’s a bond you share on the field. You put back those differences and viewpoints between our two cities.”