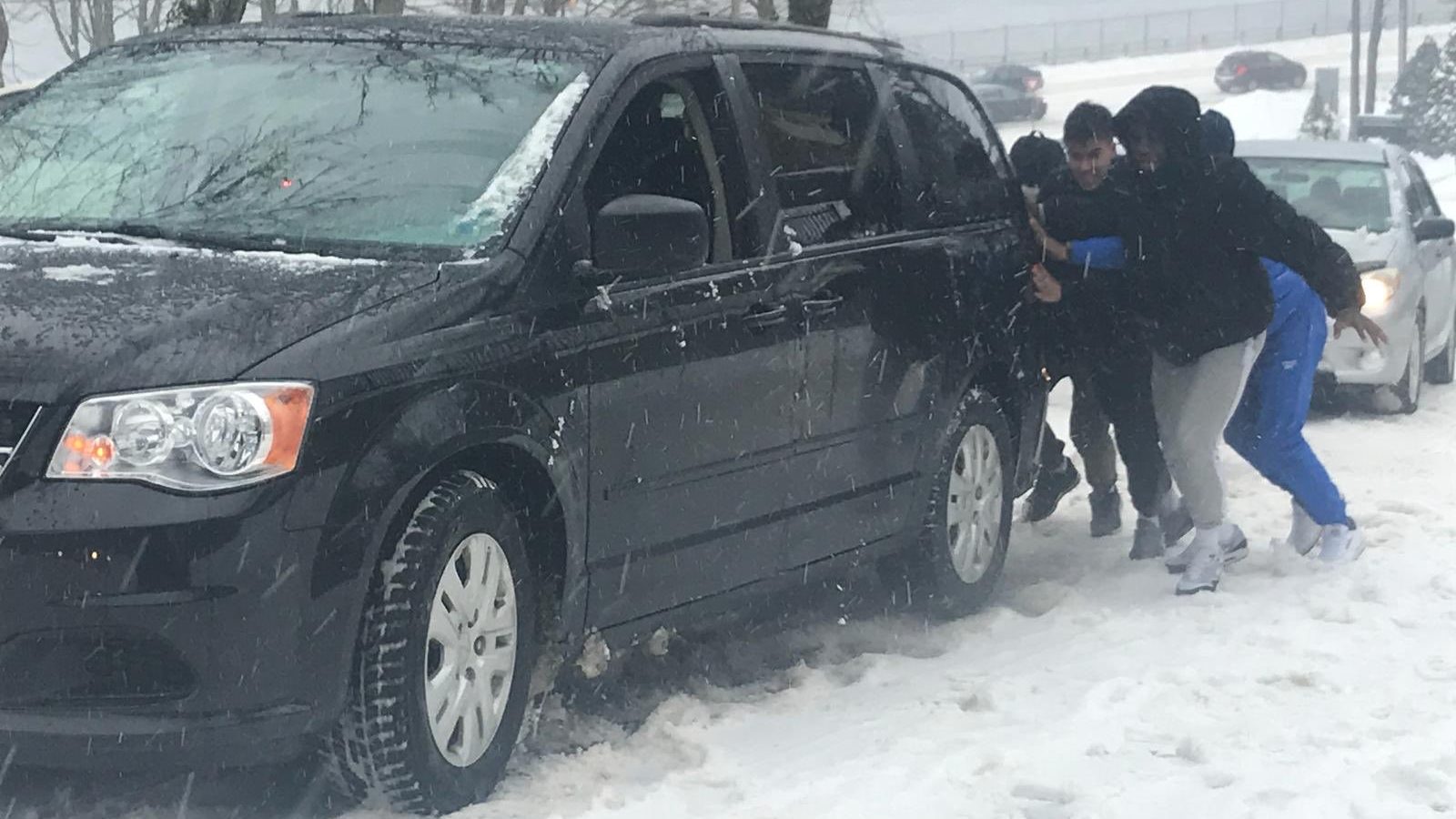 It didn’t take long for the four HFX Wanderers FC players from Trinidad and Tobago to get a taste of Canadian winter.

The quartet, alongside a dozen or so other Wanderers players who arrived in Halifax last week, were forced to deal with winter conditions rather quickly as a pair of snowstorms blanketed parts of Nova Scotia over the weekend, bringing icy roads and poor driving conditions to much of the province.

Members of the squad were pictured helping push a van stuck in the snow after the storm. Wanderers defender and Montreal native Chrisnovic N’sa offered the caption “If you stuck with your car, call 911-wanderers.”

While Trinidadian defender Elton John wasn’t part of the rescue crew, he did get stuck at practice earlier in the week.

“It’s good to see,” John said. “It’s part of building teamwork. All the guys got together.

“Throughout the league, there’s going to be a lot of hurdles we have to get over and we’re going to need everyone to chip in to get the job done. It’s good to see, even off the pitch.”

From barely ever seeing snow to attempting to learn the unique strategies that come with winter driving, John thinks he’s handling the transition well.

“I’d been in snow before, but nothing like this,” John told CanPL.ca after training on Wednesday. “I’d never got to witness an actual snowstorm.

“I’ve come prepared, I’ve prepared my mind for it. I think I had a great start.”

For midfielder Andre Rampersad, it was his first time experiencing these wintery conditions. He and a couple of teammates ventured out from a hotel to the grocery store during the snowfall to take it all in.

The Wanderers have trained three straight days since opening training camp earlier this week. Coach Stephen Hart has been working with a mixture of signed players and trialists looking to earn spots in the main squad.

“At this age, to be honest, climate doesn’t matter to me right now,” Rampersad said. “I’m just trying to make it happen in professional football. Everyone has that dream.”

Akeem Garcia, a teammate of Rampersad last season at the domestic title-winning FC Santa Rosa in Trinidad and Tobago, also experienced snow for the first time this week.

“This is my first time in snow. Actually, it’s really refreshing, I have adapted really well,” said Garcia, an attacking player who can play out wide or up top as a striker.

Hart is familiar with his Caribbean quartet after managing the Trinidad and Tobago national team between 2013 and 2016. All four players were announced by the club on Jan. 10.

Goalkeeper Jan-Michael Williams has played professional football for clubs in Hungary and Belgium, along with Trinidad and Tobago, Honduras and Guatemala.

“Coming into a snowstorm is no fun,” said Williams, who experienced snow while playing in Europe.

“I actually prefer the cold than the 30-plus degrees in Trinidad. But it wasn’t good coming into snowstorms, not this cold. But I guess when it warms up a little bit, I’ll be a little bit more comfortable.”

The ‘keeper likes to approach every game with consistency, regardless of external factors such as climate. Williams said it can be a little easier warming up and a place like Halifax on a cool day may require more moving around.

“I try to approach each situation with a level of consistency because I want to maintain that consistency on the field as well. It’s just for me now to use this pre-season period to kind of find my rhythm, find my range and take it from there,” Williams explained.

While the team has been together for less than a week, perhaps the parable of the van stuck in a snowstorm may come to illustrate something bigger as the season progresses.

The Wanderers have trained at an indoor facility on the outskirts of the Halifax peninsula. A combination of weather and busy training schedule means Williams hasn’t had much time to do any sightseeing.

The highest thing on his wish list? The Wanderers Grounds downtown where the team will play.

“For me, my mind is on football. The only thing I want to see really badly is the stadium,” Williams affirmed. “I want to get down there and have a look at it because obviously that is what we’ll be calling home for the next eight to nine months. Try to get a good vibe for it, a good feeling for it to make sure when we go down there we make it home and we defend it with pride and passion.”