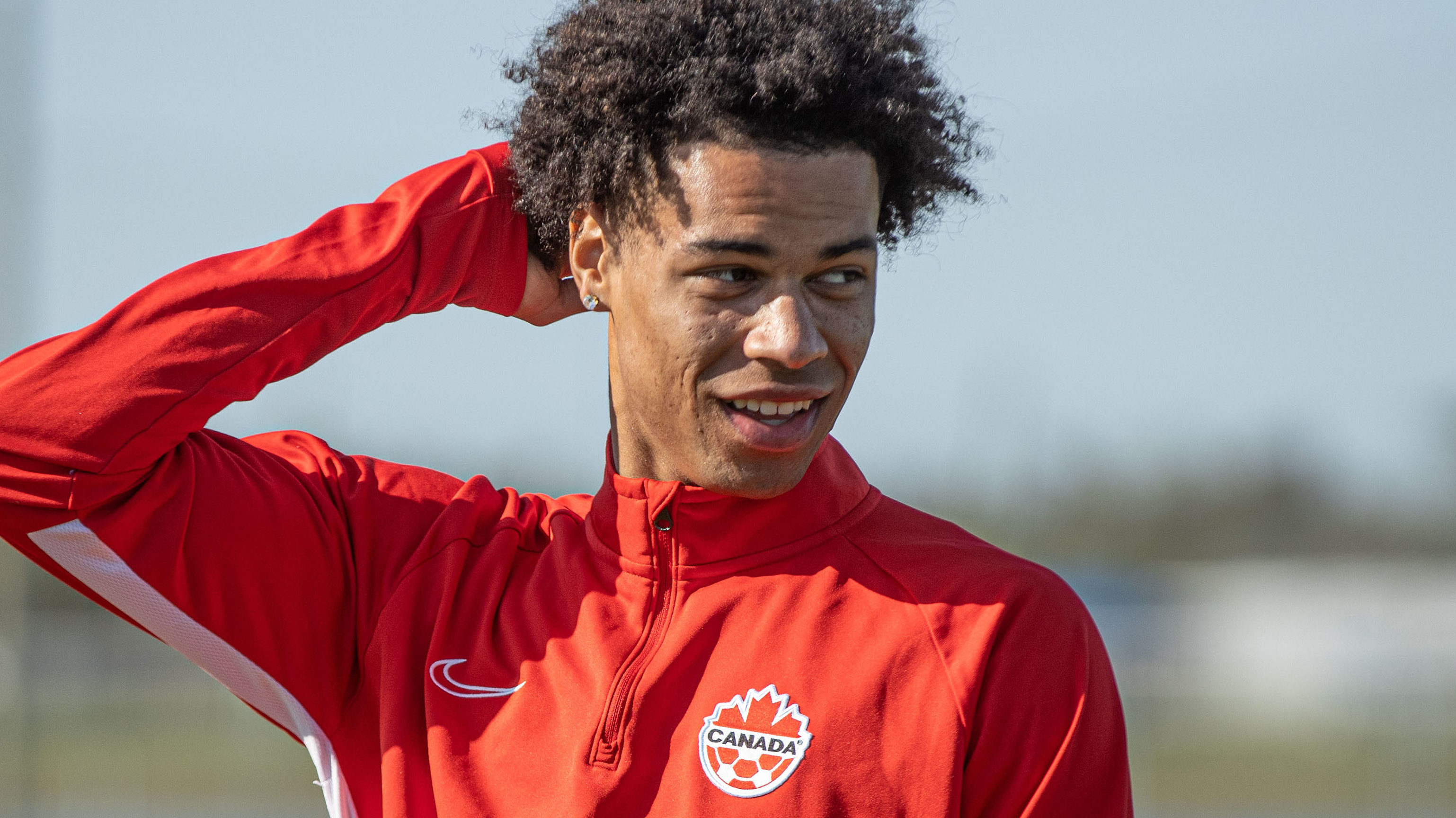 Coach John Herdman’s side is set to play Aruba on Saturday, June 5 and Suriname on Tuesday, June 8 – both matches on OneSoccer. Canada is top of Group B on six points following heavy victories over Bermuda and Cayman Islands.

Topping Group B would send Herdman and co. into the second round where they would face the winner of Group E – one of Belize, Haiti, or Nicaragua – in a two-legged tie following the Suriname match. The winner of that tie would enter Concacaf’s final eight-team round of World Cup Qualifying, a stage Canada has not reached since 1998.

To see the squad, click here. Here are some of the highlights.

Scott Kennedy and Tajon Buchanan have been called into their first proper Canadian men’s national team camp and could make their senior debuts.

Buchanan, 22, has starred as a breakout winger for MLS side New England Revoultion since being selected in the 2019 MLS SuperDraft. The Brampton, Ont. native scored twice in Canada’s Tokyo Olympics qualifying campaign, shining as a talented attacker. Buchanan was involved in Canada’s January training camp in Florida, though no games were played.

Kennedy, 24, arrives for his first-ever Canada camp after an impressive season with Bundesliga 2 side Jahn Regensburg.

A timeframe inflated by COVID-19 restrictions, Canada’s top attacker hasn’t taken to the pitch under John Herdman in a career-changing year-and-a-half. Moving from Gent to Lille, the 21-year-old has moved from the wonderkid to top European striker category after helping the French side to a historic underdog Ligue 1 title.

Whether the Ottawa, Ont. native comes back with a bit of swagger – much like Alphonso Davies did in March World Cup qualifiers – is yet to be seen.

Hutchinson misses camp due to injury

According to OneSoccer analyst Gareth Wheeler, Atiba Hutchinson missed out on the Canada camp due to an injury sustained in the last game of the Turkish season with Beşiktaş.

Atiba misses out through injury. Hearing he picked it up in the last game of the season. Miller also unavailable. Hearing the defender is out 4-6 weeks. First #canMNT call ups for Buchanan and Kennedy. https://t.co/nMfePGKMoc

Hutchinson, 38, won the Süper Lig and Turkish Cup double with the side in a historic season. Hutchinson, who is set to enter his eighth season with Süper Lig side Beşiktaş, has made 85 appearances for Canada – four behind Julian de Guzman for most all time.

Arfield out of CanMNT setup but ‘open minded’ on return

As also reported by Wheeler, Rangers midfielder Scott Arfield was not part of Canada’s 23-man squad announced Saturday. The 32-year-old last played for Canada in late 2019, a 4-1 defeat to the United States in Nations League action.

Arfield, who won a historic Scottish league title this Spring, remains ‘open-minded” about his international future according to Herdman.

On Scott Arfield: “He remains open minded on his international career. He needed that time to focus on Rangers. Nations League doesn’t motivate him that it would for young players. He’s a family man, I respect that.I think we will see him again or he makes the decision to retire”

While Canada’s tilt with Aruba (Saturday, June 5 on OneSoccer) arrives first, all eyes are on their Group B finale against a retooled Suriname (Tuesday, June 8 on OneSoccer).

Nigel Hasselbaink, who plays for Israeli side Bnei Sakhnin, has scored four goals in as many games and will be joined by newcomer Sheraldo Becker of Bundesliga’s Union Berlin. In total, only four of the 23 players Suriname selected for this June camp have more than five caps.

Canada looking to advance to WCQ second round

If Canada tops Group B, they’ll move on to face the winner of Group E – one of Belize, Haiti, or Nicaragua – in a two-legged tie following the Suriname match, meaning Les Rouges could extend this camp to a run of four matches.

The winner of the second round will advance to Concacaf World Cup qualifying’s eight-team final stage.

The top three teams from “the octagon” qualify for the 2022 World Cup in Qatar, with the fourth-placed team going into an “inter-confederation play-off” against a team from one either the AFC (Asia), CONMEBOL (South America), or the OFC (Oceania).