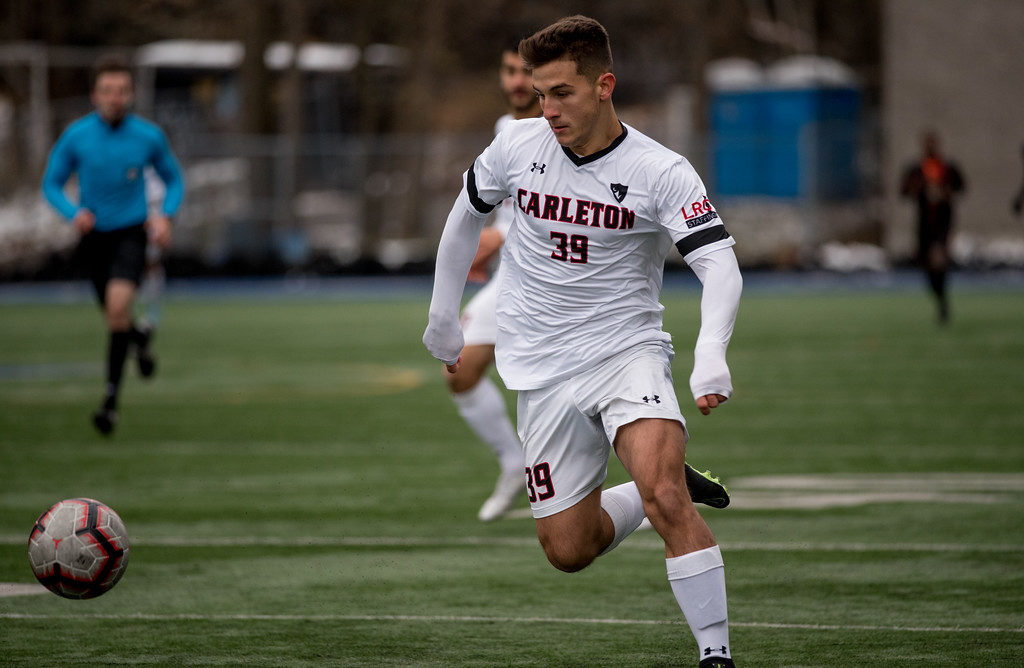 The CPL-U SPORTS Draft has proven to be a bit of goldmine the past few years for clubs looking for unpolished gems.

Players selected in the 2018 and the 2019 drafts who went on to make an impact in the CPL include Joel Waterman (now with Club de Foot Montréal in MLS), HFX Wanderers FC standouts Peter Schaale and Christian Oxner, FC Edmonton goalkeeper Connor James, and former Pacific FC midfielder Zach Verhoven.

It makes you wonder which prospects will emerge from the 2021 CPL-U SPORTS Draft that was held last week to become impact players in the league this coming season.

With this in mind, CanPL.ca’s Marty Thompson, Charlie O’Connor-Clarke and John Molinaro offer their picks below on who they think in the most intriguing player from this year’s draft.

If there is any 2021 CPL-U SPORTS draftee I’d peg to make their team this year, it’d be Stefan Karajovanovic.

The 21-year-old, fourth-year Carleton standout forward was the most tenured U SPORTS product on offer last week. No draft pick scored more often at the university level (35 goals in 37 games) than Karajovanovic, who was drafted by York United (then York9 FC) in 2019 after facing them in the Canadian Championship the year before with AS Blainville. Few 2021 draft picks had first-team experience playing against CPL clubs, time spent in CPL training camp (with York) and proper starting time in a domestic league such as the PLSQ.

The other factor that makes Karajovanovic intriguing is the team he’s joining. All five Halifax picks over the previous two drafts made professional appearances for the club the following season: Christian Oxner, Andre Bona and Peter Schaale in 2018, Cory Bent and Jake Ruby in 2019. It’s no mistake the Wanderers would objectively take the top domestic prospect available: coach Stephen Hart takes the draft seriously and it’s worked out great for him.

“We wanted to have variety in and around the penalty area,” Hart told OneSoccer’s Adam Jenkins at the draft about Karajovanovic. “Someone who’s a bit more direct and that can make things happen with his dribbling – he certainly fits that profile.”

Karajovanovic could be the most CPL-ready of all 16 draft picks in 2021, and has landed with the team that could give the best success at CPL level.

Forge went a little off the board in picking Metusala, a 21-year-old U SPORTS rookie from Concordia University. It’s a very interesting pick, though; the Montreal native can play both in the backline and at defensive midfield, and he has a very strong resume in the PLSQ already.

That said, Metusala was a bit of a surprise; he wasn’t on CanPL.ca’s list of 20 players to watch heading into the draft, and since he hasn’t yet played in U SPORTS, there’s not a lot of information out there.

Forge coach Bobby Smyrniotis pointed out on draft day that Metusala’s high ceiling was good reason to pick him, as is his technical ability with the ball. Plus, he’s self-described as two-footed, which makes him even more versatile. Forge, being a team that prefers to play with the ball at their feet, has made good use of similarly-adept defenders in the past. A younger player such as Metusala could really shore up the defensive depth with a player Smyrniotis is comfortable deploying.

Quebec has been a strong source of talent for Forge in the past, and the province has sometimes been a little overlooked at the CPL-U SPORTS Draft (Metusala is Concordia’s first-ever player drafted). If he proves to be a useful contributor à la Gabriel Balbinotti or even better, this could go down as one of the smartest picks of the 2021 draft.

The third overall pick and the only goalkeeper to be selected in this year’s draft, Yesli has an interesting backstory that extends beyond his time in the Montreal Impact Academy before joining the University of Montreal. The 21-year-old native of Montreal also has some valuable professional experience under his belt, having turned out for Vibonese Calcio in Serie D, and helping them to earn promotion to Italy’s third division.

Good with the ball at his feet, he’s been described as a technically-gifted goalkeeper who likes to create and play out from the back. At six-foot-seven, Yasli has great size and a number of physical tools, which is what drew the attention of Valour coach Rob Gale.

“One of the things we really liked is if you go across the Canadian pool of goalkeepers there are quite a few who are in that 23-27 age who have gotten stronger and gone on to success,” Gale said. “Guys like James Pantemis, (Maxime) Crépeau, (Marco) Carducci…

“Underneath that there’s not many who come through academies. We feel there’s a big upside. Whether he can compete immediately to be one of our two goalies or, for sure, hopefully within the next year. We’re really looking forward to bringing him in to camp and acclimatizing him to our game model and how we want to play and seeing him up close.”