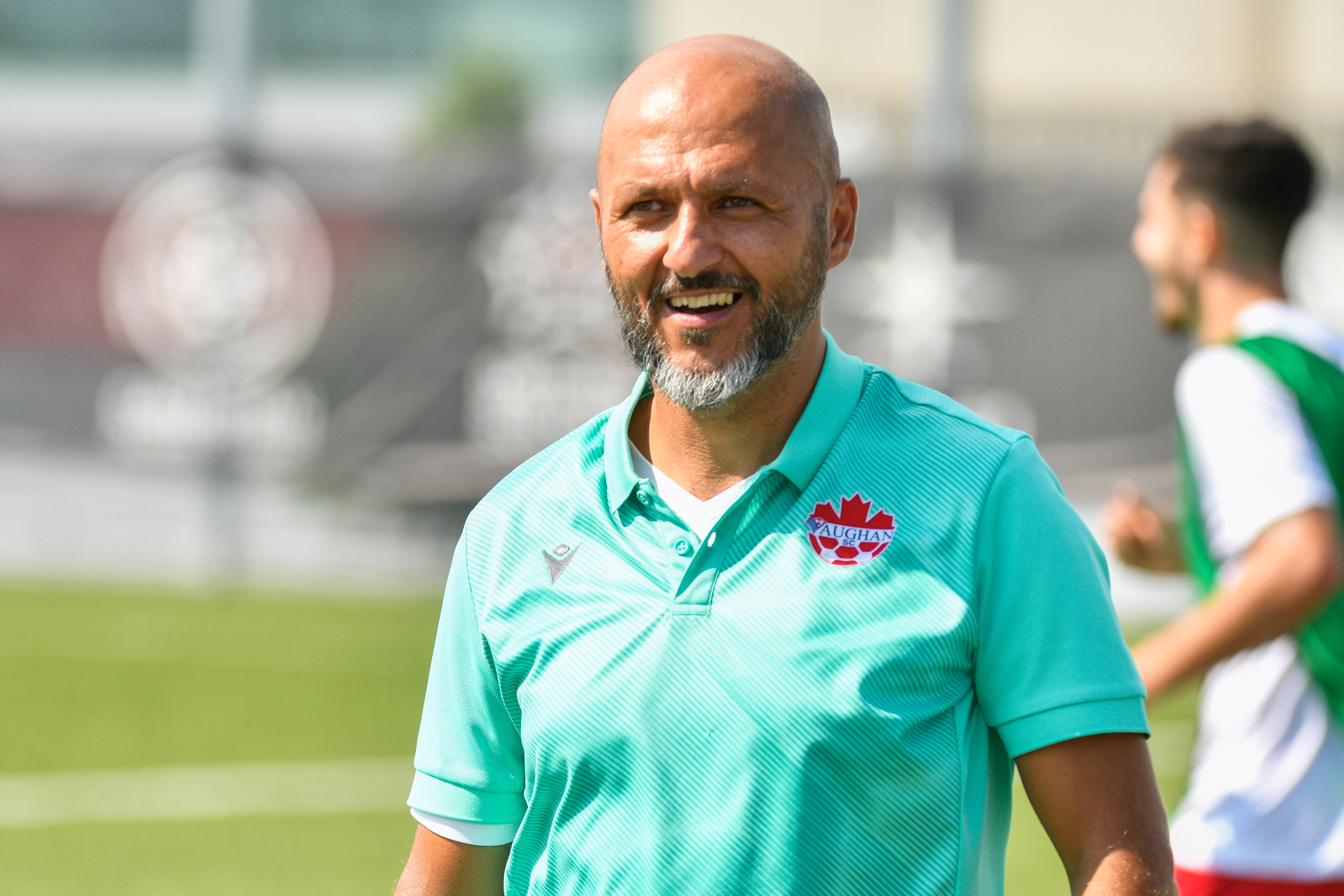 Patrice Gheisar may be new to coaching in the Canadian Premier League, but he’s no stranger to the Wanderers Grounds.

The newly-appointed Halifax manager has actually worked from the visitor’s technical area before, having led League1 Ontario’s Vaughan Azzurri during the 2019 Canadian Championship. On that occasion, Gheisar’s Vaughan side bowed out on away goals in the two-legged tie, but they actually won the second leg in Halifax 1-0 – in fact, making them the first-ever team to beat the Wanderers at home.

Now, Gheisar will be the one trying to defend that home record, when he takes over from Halifax’s first head coach Stephen Hart – who left the club after his fourth season in charge this past October.

“The excitement is beyond imagination,” Gheisar told CanPL.ca this week. “I think there’s some nerves and anxiousness and excitement to the point that you just want to start tomorrow… I’m trying to calm myself and close my eyes and just imagine the first home game.”

Vaughan’s trip to the Maritimes back in May 2019 left an impression on Gheisar, who recalls fondly the raucous atmosphere that night.

Of course, Gheisar and Vaughan left an impression on the Canadian soccer community that night, too; from that squad, Maxsym Kowal, Jared Phillips and Duran Lee would go on to play in the CPL, and Ryan Raposo would soon be the fourth-overall selection in the MLS SuperDraft, going to the Vancouver Whitecaps.

Oh, and there was a player in midfield called Alistair Johnston. He’s at the World Cup right now.

Gheisar has an impressive track record of producing professional-quality players in his time at Vaughan. Along with Johnston, Kamal Miller and Dayne St. Clair from Canada’s World Cup squad played under him in League1 Ontario. Gheisar also once worked with Jonathan Osorio at SC Toronto.

That said, he admitted he feels a little pressure stepping into this job to represent L1O well at the CPL level. Gheisar isn’t the first gaffer in this league to coach at that level – that would be Forge’s Bobby Smyrniotis, who helmed Sigma FC for years before the CPL began, as well as inaugural York (and former Aurora) boss Jimmy Brennan – but he would be the first to work his way up the pyramid from League1 since the top-flight league kicked off.

“This is a great move for every coach that believes they’re never gonna get a pro job,” Gheisar said. “I felt the same way, so I feel like this is the story of the underdog. I feel like Halifax is an underdog city too, right? So let’s just keep moving and I’ll be representing all my colleagues that are at League1, OCAA, OUA that deserve a shot like this. There’s a lot of good coaches, as there’s a lot of good players.”

According to Wanderers sporting director Matt Fegan, Gheisar was always a primary target for the club when they went about looking for a new head coach. The club was “inundated” with applicants for the job when it became available, and they considered a strong shortlist of candidates, inviting a handful to Halifax to interview in person with Fegan and club president Derek Martin.

Ultimately, though, Gheisar continued to stand out. The Wanderers felt his vision aligned well with their club and the culture in Halifax, and Fegan explained that he was convinced Gheisar could build a team to play entertaining football.

“Throughout his coaching career he’s always gained a reputation for playing on the front foot, playing attacking football,” Fegan told CanPL.ca. “He wants to win games in an exciting manner, not just sit back and hope to squeeze a 1-0 win.

“I think that’s something that will really resonate with the fans and keep the great atmosphere that we’ve already developed in Halifax going, and marching toward our efforts to build things like a permanent stadium and hopefully bring titles to Halifax as well.”

Gheisar himself expressed excitement at the opportunity to help rebuild the Wanderers’ squad, explaining that it would’ve been more challenging to take over a complete squad of players that might not fit his own desired style or club culture.

“What did you dream of when you were a kid? You never dreamt of blocking a shot off the goal line and defending; you dreamt of passing and scoring. We want to bring that engagement and fun and upbeat [style] to our fans. No other team in this league has the type of fans we have, and once they see that we’re trying to play, they’re gonna get behind us with twice the effort they already have.”

Now, the work begins for Gheisar and the Wanderers’ management, who will be hard at work over the coming months trying to rebuild a squad and return to the playoff picture.

The Wanderers do already have a history of finding diamonds in the rough, including from the League1 Ontario level – with which few are more familiar than Gheisar. When Vaughan took on the Wanderers in a preseason friendly before this past season, Ryan Robinson impressed the Halifax club enough to sign him.

“My goal will be to find players that want to grow, want to get better,” Gheisar said. “The investment of my minutes is going to improve their game, right?

“Those learning curves need to go to players that want to learn, not just be sour because it’s tough. And it’s going to be tough, there’s no question. We’re going to be against it, new coach, new players.”

Gheisar has found quality players in unlikely places before, and he explained that the Wanderers will need to get creative to build the kind of team they want. He offered up various options – players from League1, USL-level players needing new clubs, or some cut from Canadian MLS academies.

Giving a chance to players who otherwise might not find one has been a trademark of Gheisar’s career, of course:

“Everybody said Kamal [Miller] was slightly overweight, they didn’t want him. Alistair [Johnston] was too skinny and not athletic enough. Dayne [St. Clair] was too flashy. Ryan Raposo was too small and skinny. But they just needed a chance.”

Now, those players are well-established in the professional game – although apparently none of them have forgotten their roots. When Gheisar texted Miller, Johnston, and St. Clair to tell them he’d gotten the Wanderers job, they all called him (from Qatar) in minutes.

Gheisar has that same connection with most players he’s coached over the years. This week, he broke the news of his departure to his Vaughan players, and he shared that it was an unexpectedly emotional moment.

“A lot of tears, a lot of emotions from grown men that I didn’t expect,” Gheisar said. “It was definitely a very, very emotional day for me.”

He added, though, that the message is not quite goodbye, but perhaps “see you soon” to many of those players. Gheisar suggested a lot of them could play in the CPL sooner rather than later, and there’s plenty of precedent for players from the L1O level making that jump.

That said, there’s another way Gheisar might see them soon: By virtue of Vaughan’s dominant 2022 season — undefeated in the regular season and going on to win the playoff final 5-1 (for which Gheisar was named L1O Coach of the Year) — they’ve qualified for the 2023 Canadian Championship.

“Oh God, don’t do that to me, man,” Gheisar laughed when asked what he’d do if the Wanderers end up drawing Vaughan in that tournament.

“You know, whoever the mighty power is, in my life has always had a sense of humour… How about this? I’ll guarantee you a Vaughan-Halifax draw,” he joked. “I would probably try to call in sick that day.”

So begins a new adventure for Gheisar, and for the Halifax Wanderers.