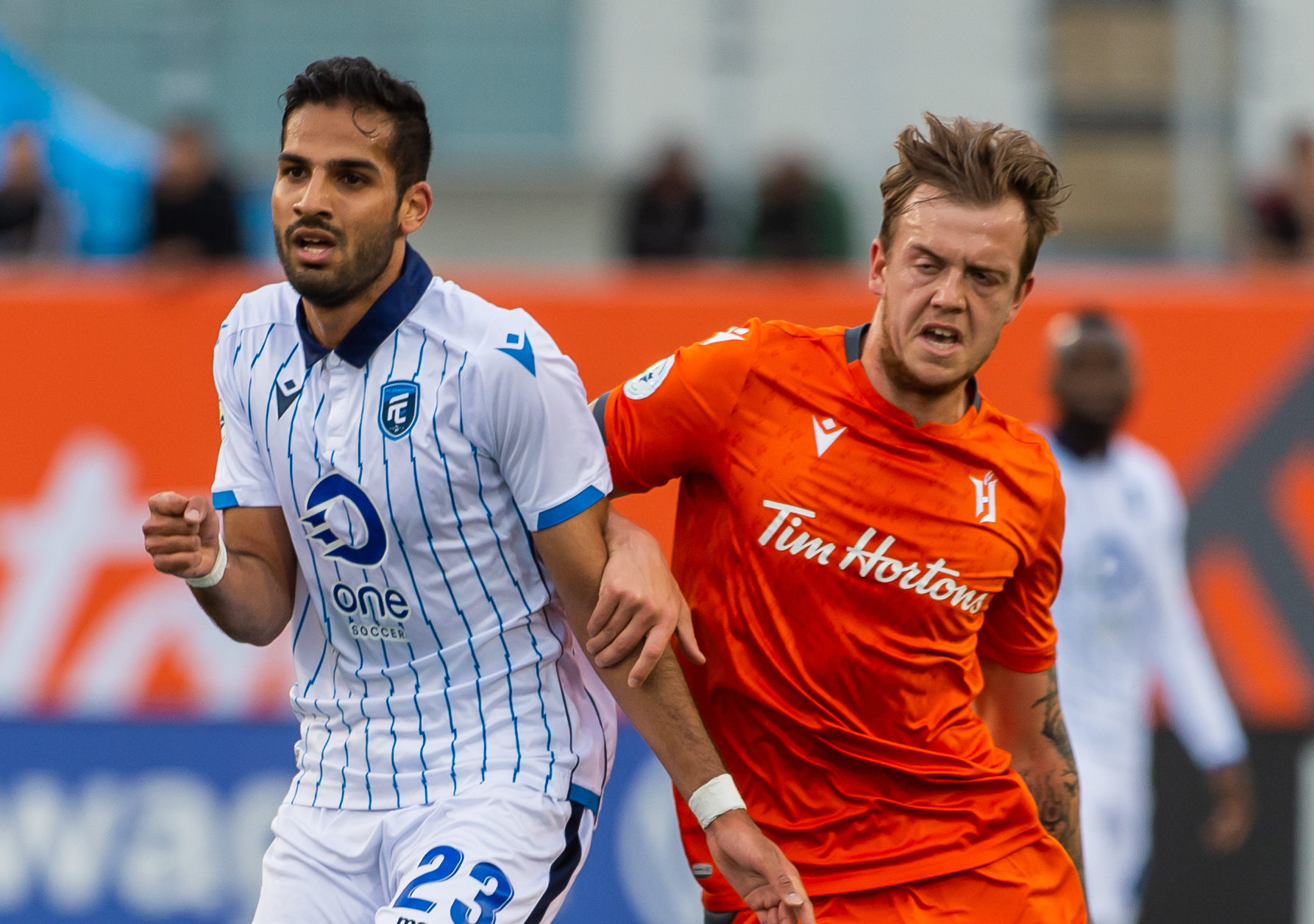 FC Edmonton began the on-field portion of the club’s 2020 training camp, and it featured 15 returning players.

With that many returnees, it’s easy for the sideline observer to imagine what the team will look like when the season kicks off in April. Amer Didic and Mele Temguia in the centre of the defensive line, Easton Ongaro looking to improve on his 10-goal season of a year ago. The goalkeeping tandem of Connor James and Dylon Powley. Long-time FCE midfielder and fullback Allan Zebie. And then there’s Hanson Boakai, who is technically a “new” signing, but played from 2013-15 for FCE in NASL 2.0.

But, there was one player notable in his absence. Ajay Khabra is currently a free agent — a victim of the numbers game, said coach Jeff Paulus.

“He will not be back this year,” Paulus said after the club’s training session Wednesday at the Edmonton Soccer Dome. “He is the casualty of the salary cap. I wanted him back this year, I want him at this club, he knows how I feel about him as a player and as a person. I’m absolutely gutted that I couldn’t make it work out.”

Khabra leaves a pretty big hole to fill. Khabra started 21 games in FCE’s midfield last season, and came in as a sub in three others. By the fall season, the University of Alberta grad established himself as a key part of the lineup.

So, who comes in and eats up those minutes in the middle of the park? Look to Erik Zetterberg, the Swedish midfielder who was signed by the Eddies earlier this year, to be one option.

“Erik Zetterberg, he can pass a ball,” said Paulus. During Wednesday’s session, Paulus was already wowed by what he saw from the son of Swedish national-teamer and long-time Anderlecht star Par Zetterberg.

“Every touch is clean, every little one-touch ball is in the right space,” said Paulus. “It’s on the ground. He can spread a field.”

“My vision, my passing ability, close- and long-range passes,” that’s what Zetterberg listed as his strengths when asked what he’ll bring the FCE in 2020.

He admitted he really doesn’t have a sense of what kind of challenge the CPL will bring to him.

“A sense of the level? I have no idea,” he said. “But I’ve watched highlights and videos of games from last season, and it seems like a good level. I saw it today (at training) with the level of players, they’re very good. So, I’m just excited.”

Zetterberg also knew that Powley played for a bit in Sweden before coming home to sign with the Eddies.

But there are a couple of the returnees who could also be in line to eat up Khabra’s minutes.

“People forget that Allan Zebie’s best season at FC Edmonton was in 2017 (in NASL),” said Paulus. “And that was as a holding midfield player. In that position, he covered a lot of ground for us. He did distribute the ball.”

“I’m sure I’m the most biased manager of them all in this league when I talk about my guys,” said Paulus. “But Edem Mortotsi, at the end of the season, was this league’s best overall midfield player… He’s one who has the ability to dominate the CPL in that position.”
Mortotsi is expected to begin training with the Eddies in the next four to five days, as he deals with a couple of nagging issues.

There was one other member of the roster not on the field Wednesday, as Peruvian signing Raul Tito has yet to get his visa. The team is hopeful that all the paperwork will be signed off on in the next couple of days.