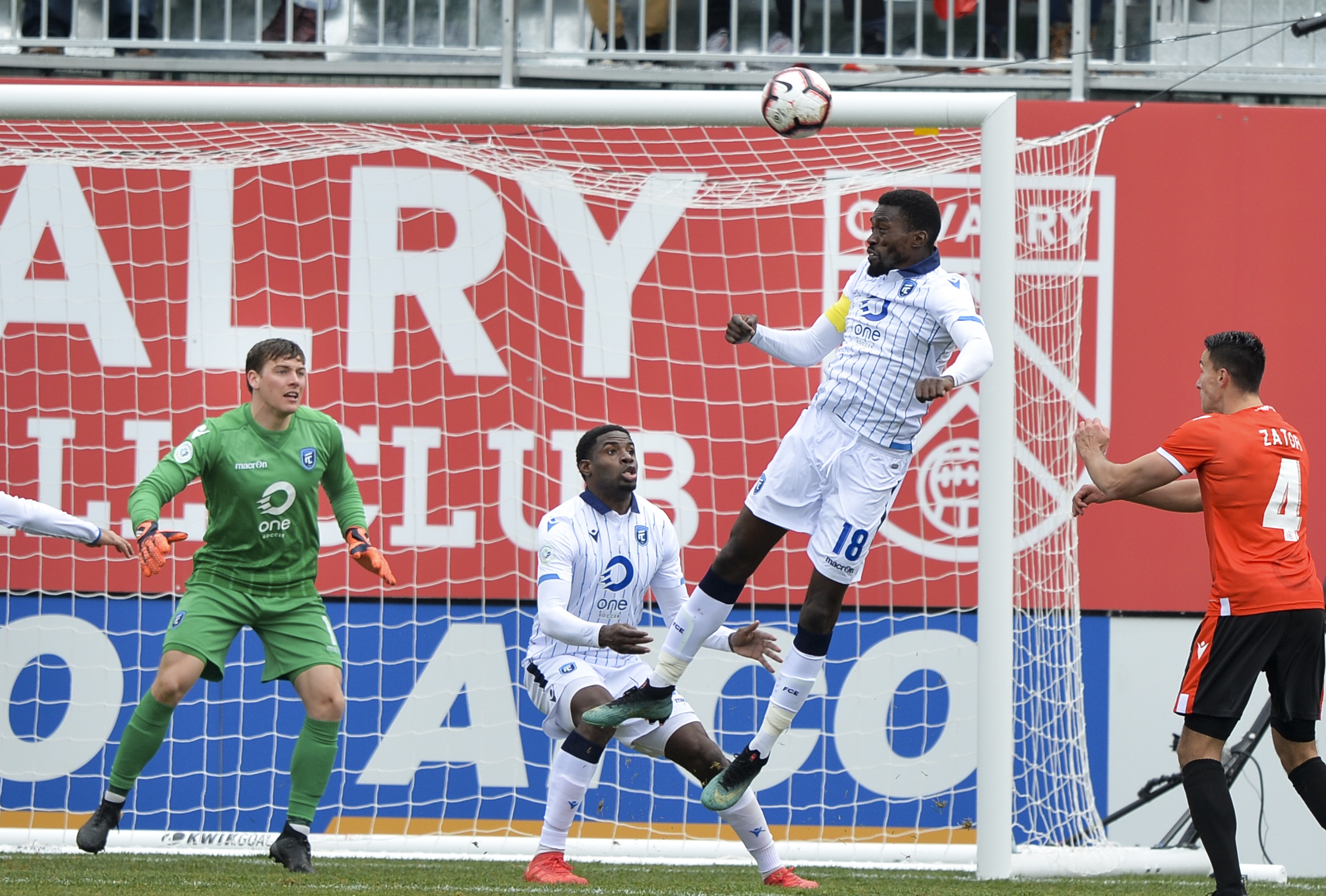 The centre back, whose bread and butter is physicality, suggested that we might see players caught sleeping on the ball, not expecting the immediate challenge since that pressure has been absent in training. He’s not convinced we’ll see more goals (not if he has any say in the matter, at least).

So, what’s the perspective like at the other end of the pitch? FC Edmonton’s veteran striker Tomi Ameobi gave some thought to the matter this week. Will the eventual return of the CPL be a forward’s dream, with defensive systems all but absent? Or will experience prevail, and steady the ship sooner rather than later?

“I think initially it might take some getting used to,” Ameobi told CanPL.ca. “I guess timing of tackles, timing of runs, timing of first touch. But just from experience of playing the game, even when you’ve been out for a certain amount of time injured, I know it’s different, but when the game starts for myself anyway you tend to forget about everything and focus on the game.”

The 31-year-old is champing at the bit to get back to it, hoping desperately to find better scoring form after, by his own personal standards, a disappointing 2019 — four goals in 23 games for FCE. He’s pretty confident that the intensity will be sky-high from matchday one.

“Obviously what we’re going through at the minute has made things difficult for us, as players as well,” he admitted. “But I think once the games start going, it’ll just be back to business as usual. You’ll see full-blooded challenges, you’ll see guys going full tilt.

“That’s why we love the game.”

It’s been quite a long hiatus, and Ameobi is willing to admit that it was difficult at times, especially not knowing whether or not his FC Edmonton side would have anything to work towards. The striker suggested that the time off affected him mentally more than it did physically.

Now that the Eddies have been training for over a month, and the group’s spirits have lifted a bit — it seems, more and more, that there could be light at the end of the tunnel with regard to kicking off the season — that love of the game has re-emerged in players like Ameobi, who’s set to play the 13th season of his pro career.

“In terms of keeping my body in good enough shape, that hasn’t been a problem. Where the problem has been for me, and I can’t really speak for any of the other guys, but it’s been more staying mentally engaged,” Ameobi explained.

“Obviously there’s been a lot of chatter here and everywhere over the last couple months with regard to a season going ahead, and there’s been days where it’s been easy for me to feel sorry for myself. Thankfully I’ve got a great support system around me, and during those times they’ve helped sort of pick me up, but getting back out on the field now, you don’t really tend to have those thoughts and those emotions as much.”

Returning to the topic of what quality of football we’re going to see once these long, socially-distanced pre-seasons culminate in competition, Ameobi concedes that tactics may not be particularly well-entrenched from day one of the season.

Again, though, Ameobi’s staunch position is that quality and experience will prevail.

“A tactical plan can’t be built overnight,” he said. We haven’t had as much time, and the pre-season games to work on those sort of things, so if and when we do get back to games, are you gonna see teams lining up differently? Potentially. Is it gonna impact on the quality of football that we saw last year? I don’t necessarily think so.”

He added: “I know tactics are important, but at the end of the day I really believe that there are some very promising players in this league with really good talent. That talent will shine through.”