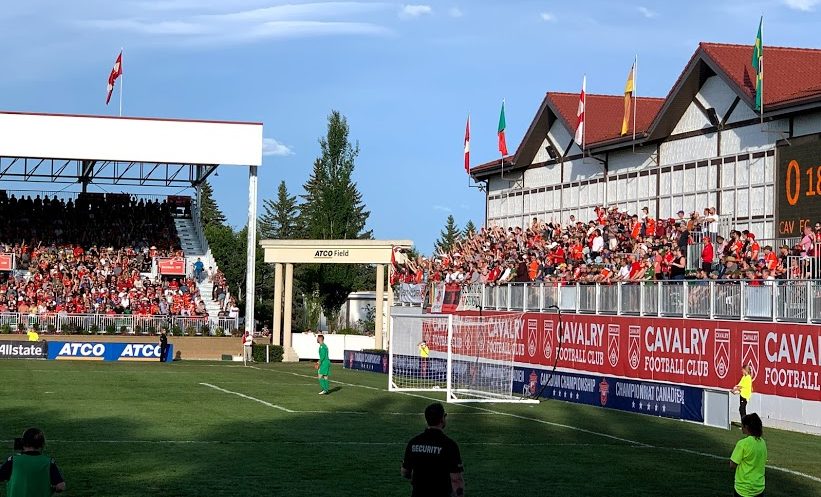 Whoever dubbed The Calgary Stampede as “The Greatest Outdoor Show on Earth” needs to come back to the city for a Cavalry FC match.

From the start of the season, Cavalry have been the team to beat. Having secured their place in Canadian Premier League history by winning the Spring campaign, the Cavs have helped to make Calgary a Canadian soccer capital and a unifier of Calgarians across the city.

Take, for example, Nicki Brown and Becca Dean, two different women with one shared love for the Cavs.

“I was at a horse jumping event when Ian Allison (President and COO of Spruce Meadows Sports & Entertainment) announced that they were bringing professional soccer to Calgary and introduced Wheeldon Jr. as the coach,” Brown explained. “Afterwards, I walked up to them and said, ‘My mom and I will be there every game cheering.’ I left immediately to call her and put my deposit down on season tickets.”

For Dean, it was her dad that got her into becoming a fan, even if it was, admittedly, slow at first.

“I was working in Calgary this summer and my dad asked me if I wanted to go to a soccer game. Initially, I said no because it was snowing, but I went to the next one and ended up either going to, or watching, every game after,” Dean explained.

From those moments on, both women were hooked.

Cavalry became a family affair for Brown; her mum and kids quickly joined the Foot Soldiers Supporters and have been active participants in the group since.

“My kids love (Nik) Ledgerwood and are constantly singing our player song for him; it’s endless and to the tune of ‘Baby Shark.’ They love going to the games and the Foot Soldiers have welcomed them, letting them drum and lead chants,” Brown said.

But the drums and chants are just the start of the Browns’ participation. The family is also involved in the creation of game day tifo (banner making).

“It is part-fine art, part-creative genius, and 100 per cent magic,” Brown described. “We have done railing banners, one for the (Canadian Championship) match against Montreal, and one for our first fundraiser in support of Calgary Outlink. My kids also designed their own tifo earlier this year! It was really well done and has become a centrepiece for the Foot Soldiers.”

She added with pride: “It has been signed by the players and taken on the road for away games.”

Dean confirmed Brown’s assessment of it being magic in the stands on game days: “Those seats are very noisy in a way that doesn’t translate on television!”

Dean’s game day has its own rituals, starting with putting on Cavalry clothes, before driving out to Spruce Meadows to grab a beer and a burger. However, once in the stadium, she “kicks the stands as hard as I can.”

“The venue and the atmosphere that the Foot Soldiers create is fantastic and a lot of fun, plus the quality of play is also much higher than I expected,” Dean admitted.

“[Nico] Pasquotti is awesome, so is [Marco] Carducci. I used to play right back/centre back so my favourite players are usually defenders.”

She also has a healthy respect for the Cavs’ coach.

RELATED READING: From bacon and bagels to Forge FC fanatic

“It’s cool to see Tommy Wheeldon Jr. getting recognition for what he’s done with the team. I played for Foothills (Soccer Club) for a long time and he was always very polite and friendly whenever I encountered him,” Dean said.

The CPL has been a long time coming for Dean, and she believes it offers nothing but promise for Canada’s soccer future.

“I didn’t have this when I was a kid, so I hope some other kids get to watch a game and go, ‘wow I want to do that!’”
Dean said.

“It’s really cool to have a pro soccer team in Calgary, everyone knows how much we love hockey but it’s nice to see people showing support for a new team.”

“Calgary can get pigeonholed as a place full of cowboys and hockey, but we are so much more. You can see it at every soccer match, we are a vibrant community, full of friendly people who will welcome you, celebrate you, and are happy to learn something new,” Brown stated.