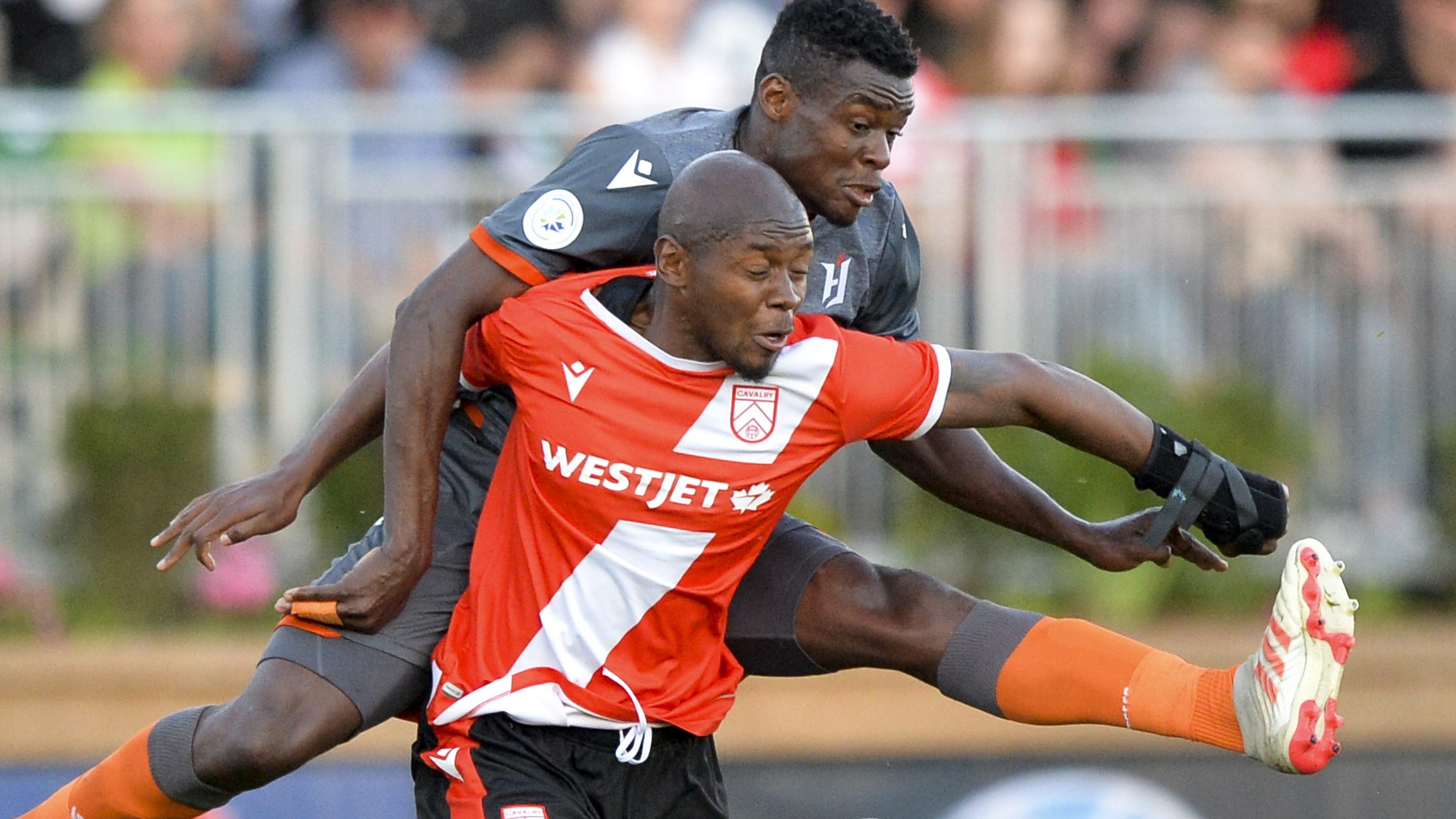 After moving to the United States to join MLS club Minnesota United in February 2018, Forge FC defender Bertrand Owundi never had a real chance to find a consistent spot in Adrian Heath’s side.

Released at the end of that same season, the 25-year-old Cameroonian didn’t give up, determined to continue his North American adventure. A few months later, it was north of the border that he finally found the opportunity he’d been looking for, in the CPL.

“It was my agent who led me to Minnesota, and it was also he who made contact with Forge FC,” Owundi told CanPL.ca. “He presented the project to me, we discussed it and we decided it’d be a good springboard, but also a great adventure and a new experience. For me it’s important to learn wherever I go and to have positive experiences.”

Despite his short stint in the U.S., the change of scenery was significant for the central defender upon his arrival on Canadian soil: not only a new country, but a new league and a new club in its infancy.

“I was in discovery mode,” Owundi said. “It was the first time I’d been to Canada, and in a league just making its debut, so I discovered everything at the same time. I was very satisfied by everything I found here. My expectations were high from the start, and I noticed that over time things have been in crescendo.

“I believe the CPL is very promising, with a lot of good players, good coaches. The league did a good job organizing everything, and that’s great for us footballers.”

This adaptation was made easier by several francophones within Forge’s squad, as well as the efforts of several other players who weren’t hesitant to draw on their high school French classes to try and accommodate him.

“That always helps, to find people who speak the same language when you arrive in a new environment,” Owundi said. “Here, I found David Choinière and Elimane Cissé and a few other guys who tried to speak a little French to me when they could. The assistant coach (Johan Albert) is French as well, and that also helped me a lot in my integration.”

As for his own English ability, the Cameroonian international is working hard, even if he wishes he was improving more quickly.

“It’s not fast enough for my taste, but it’s going well,” he admitted. “I still have difficulty expressing myself orally, but my understanding is already at a good level. The most important thing for me is to understand my coach’s instructions and to be able to execute them on the pitch.”

Things are certainly going well on the pitch for the 6’2″ centre-back, who’s approaching 2000 minutes played across all competitions in 2019, playing an essential role in one of the most solid back lines in the CPL.

Forge finished the Spring season in second place, just behind Cavalry FC, and they’re at the top of the Fall table, already assured of a spot in the Canadian Premier League Finals against Cavalry. For Owundi, that success is easy to explain.

“Forge is a team that tries to play a game with sophisticated principles,” he said. “Our coaches are close to us, they communicate well and try to find the best strategies for each game, for each opponent, so we have good solutions and good results. Also, we’re a very close group, unified, and that helps a lot.”

Once it’s over, the inaugural CPL season will have had its share of great stories and dramatic narratives. The burgeoning rivalry between Forge and Cavalry, already intense, is one of the most interesting, as the two clubs haven’t stopped hounding each other in the league.

They also crossed swords in an explosive Canadian Championship clash, which saw the Calgary club get the upper hand en route to the semifinals of the tournament against the Montreal Impact.

“We’re not only focused on them, but they’re a team with great potential and a lot of quality,” Owundi said. “It’s a team that gives away nothing, matches against them are always difficult. So far, we’ve had great games with them, and I hope this rivalry lasts a long time. It’s always exciting to have two or three clubs in a league that fight each other for trophies.”

Looking back, number 21 in Orange is happy with his choice to come to the CPL. He can see it progressing swiftly over the next few years.

“There’s something special,” Owundi said. “Already in one season it’s a success, there are a lot of good teams playing a good level of football. Even though some of them haven’t had the results they hoped for, they caused problems for every team, in every match. … This league has a lot of potential. I believe that two or three years from new, the level will be much higher than it is now.”

Owundi has told people back home in Cameroon about this new league, and its reputation has quietly spread across the footballing world.

“Everybody likes new things, and people ask me lots of questions,” Owundi said. “They’re curious to see how things are going here. When I talk to old teammates I have nothing but good things to say. I’ll send them videos of matches and they’re pleasantly surprised by the level, they feel it’s something very interesting coming into place on this side of the world.

“There are definitely people who are watching this league with a lot of interest.”

Although the prospect of finding a regular spot at the highest level of the sport may be out, a return to the Cameroonian national team is high on the list for Owundi, who considers the CPL an excellent showcase to catch the eye of the Indomitable Lions’ new coach, Portuguese manager Toni Conceição.

“It’s always in the back of every footballer’s mind, to be able to defend your country’s colours,” Owundi admitted. “For my part, I’ve already had the chance to do that, and I hope that I can represent my country again soon. . . . The league here is very professional, and in Cameroon they appreciate things that are done well.

“They feel that things are developing very well. It’s an advantage to have players everywhere who can perform in the side, and if that chance is given to me, I think I’ll be able to seize it.”

You can bet that, if he’s lifting the trophy as CPL champion in November, it wouldn’t hurt Bertrand Owundi’s case to get back into his national team.