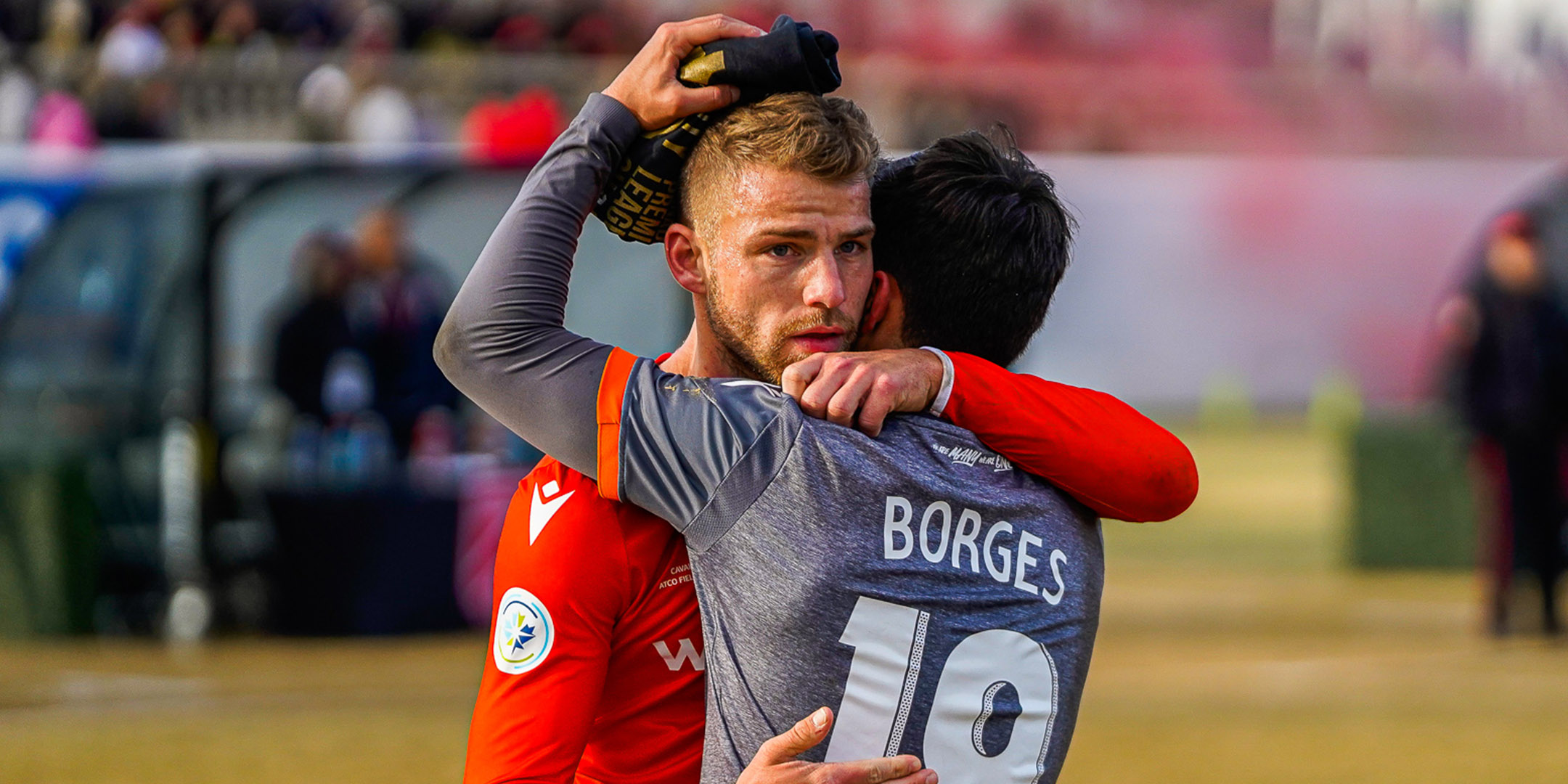 For those who missed out, it was every bit as emotional a contest as the previous weekend’s first leg, with crunching tackles at every juncture. The stakes were high, and both Forge and Cavalry acted like it.

With the first-ever CPL Finals (and season) now complete, let’s look back on ten photos from Saturday that tell the story of Forge’s historic victory.

Just as Tim Hortons Field was a week ago, ATCO Field was packed for Leg 2, especially the supporters’ section. Every inch of the rail seemed covered in flags, and the Foot Soldiers were in full voice for 90 minutes, and a good deal after that as well.

Saturday’s match was a tough one, and Cavalry’s Nico Pasquotti often found himself right in the middle of the fury. Here, he came out on the losing end of a battle with Forge’s eventual goalscorer, David Choinière.

The physical rivalry was not without casualties. Anthony Novak took the brunt of a tackle late in the second half, and needed the help of his teammates and trainers to leave the pitch. He wasn’t the only one, either; this match took a toll on every player.

Forge were pinned back for most of Leg 2, trying to hold onto their lead, but they held firm against Cavalry’s onslaught. Triston Henry was outstanding in goal, coming off his line aggressively and making the save whenever called upon.

With Cavalry throwing all they could at the Forge goal, David Choinière put the match to bed deep into stoppage time with his counter-attacking goal. As luck would have it, he finished right in front of the travelling contingent of Forge fans, to which he beelined after scoring.

At the final whistle, just seconds after Choinière’s goal, Forge’s bench players wasted no time in rushing the pitch to join their teammates. It looks like goalkeeper Quillan Roberts was first to arrive.

7. Spare a thought for your adversary

Gracious in victory, a number of Forge players were spotted congratulating their rivals on a well-fought season. Here, Tristan Borges consoles Cavalry’s Julian Büscher after the final whistle.

The weather cooperated pretty well in Calgary, but it was by no means a scorcher. Still, it looks like adrenaline (and a Barton St. Battalion scarf) provided Forge’s Kwame Awuah with all the warmth he needed.

9. The founder and the fans

Caretaker Bob Young was, of course, on hand for the festivities. He was quick to visit the Forge fans behind the net after the game, celebrating the long road it’s been to get to this point.

Kyle Bekker here became the first person to lift the North Star Shield as CPL champion. History was made in this moment at Spruce Meadows.