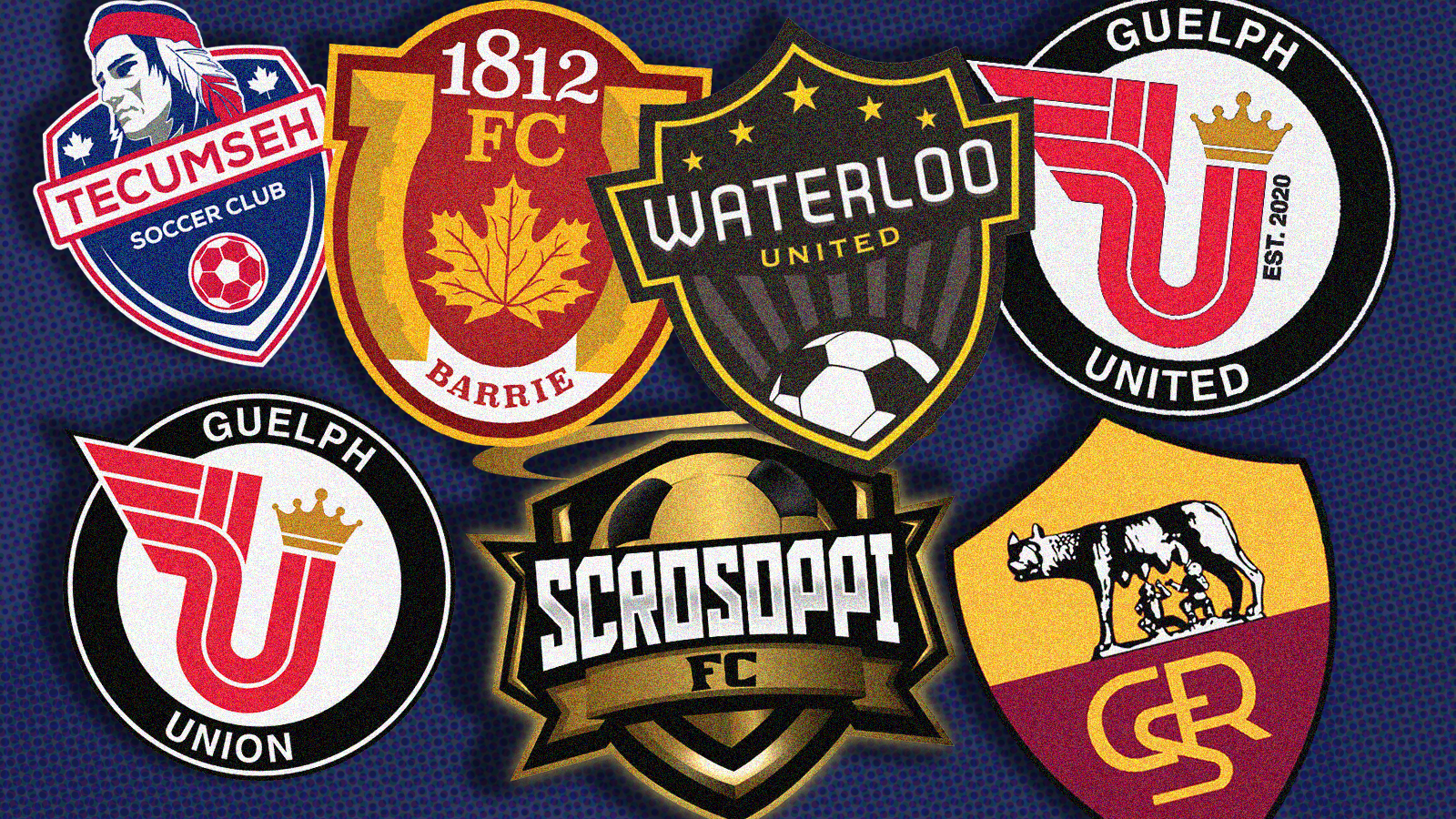 L1O expanded well outside of its familiar Greater Toronto Area confines, more than doubling the number of clubs and teams based outside of Toronto or Hamilton for 2021.

There are some ambitious groups, too: Guelph and Waterloo joined with men’s and women’s programs, 1812 FC has made splashes in Barrie, while St. Catharines, Tecumseh, and Scrosoppi are set to build on history and strong player pools for a competitive first season.

Below are profiles of L1O’s new clubs originally published on League1Ontario.com.

Named after an Italian saint and youth football advocate from the early 19th century, Scrosoppi FC arrives on the scene to service Brampton and Milton with a key developmental stepping stone for players in that crucial 18- to 22-year-old range.

The area has produced some prominent footballers – York United’s Isaiah Johnston being one – but, previously, many have been forced to move elsewhere for playing opportunities.

“Development is a long-term process and players develop beyond 18, some players hit their peak at 21, 22 years old,” Joey Lombardi, Director of Development at Brampton SC, told League1Ontario.com. “And as a club, we want to offer those opportunities for players to continue on that journey alongside Milton.”

Based out of Barrie but set to serve all of the Huronia region, 1812 FC is the brainchild of a passionate group of local soccer supporters who sought out something the area was desperately missing — a high-level competitive program.

Ronan Cordelle helped form the Kempenfelt Crew, the club’s official supporter’s group, and brought Andrew Weilgus on board from Atlantic City FC of the NPSL to help sort out the logistics before an official bid for L1O expansion was launched last Spring.

The ultimate aspiration is to seek out CPL expansion down the road, but Weilgus and the rest of the 1812 board are excited for the here and now and the opportunity League1 offers.

“In Barrie, a lot has to happen on the grassroots level to warrant that move up (to the CPL),” Weilgus told Premier Podcast’s Mike Miller. “But we’re excited to just be in League1, get that started and build a high-performance program for the entire Huronia region,” added Weilgus.

Waterloo United is ringing in 50 years of bringing the beautiful game to the city while celebrating another milestone for the club — expansion sides in both the men’s and women’s L1O divisions.

Inclusivity is of the utmost importance to Waterloo and its Executive Director Paul Burns. As a result, it was essential to ensure United players of elite talent, both male and female had the opportunity to continue that development now at the League1 level.

"Waterloo United is pleased to add a women's team to @L1OWomens. It is important for #WMSC1971 to offer this level of competition for both the young men & women of our Club." – @Burns_Paul78https://t.co/XdMgGs96Em pic.twitter.com/4kTJTVkoig

“The next step for us is League1 and for us, it’s a natural progression to complete that player pathway,” Burns told League1Ontario.com. “We had no plans to participate in League1 unless we had both a male and female entry.”

In this next chapter of the club’s history, the goal is to offer the best programming in the area which in Burns’ eyes might not always come in the form of hardware.

“When I say best, I don’t mean necessarily winning every trophy, I mean providing a safe, enjoyable experience.”

Head of operations Carmine Provenzano said the Niagara Region “lost its identity” when the Wolves left the CSL in 2014.

“When we lost our team we lost our presence in the area,” Provenzano told League1Ontario.com. “Not just in the area but nationally as well, since we had some big players come out of Club Roma in the ’90s like Tomasz Radzinski, Lucio Ianiero and many others. That history has always been there.”

It’s now up to Wolves to influence the next generation east of Hamilton – and draw the next Tomasz Radzinski through their program.

“We’re trying to get that second-generation, third-generation group together and have a place to congregate and I think soccer and this club did that for the region during the ’90s,” Provenzano said.

Tecumseh SC relish in small club billing: ‘We want to be the Iceland of L1O’

Mighty Tecumseh SC is set to be the first L1O women’s side to service Windsor-Essex, stationed on Ontario’s southern tip and hours away from their nearest opponent, FC London, and even farther away from Toronto.

Founded in 1999, Tecumseh is a small, community-based club that sporting director Ryan Mendonca has akin to one of the greatest underdog stories from world football.

“We want to be the Iceland of League1 Ontario,” Mendonca said, referring to the senior men’s national team that qualified for Euro 2016 and the 2018 World Cup in Russia.

“We’re a small club, I won’t lie,” Mendonca began. “But we do have a very strong united group of players, and a very strong united group of staff that really believes in ourselves. We also don’t have the means in this region to merge with other clubs, that sort of thing, so it creates a family atmosphere and, ultimately, one a lot of players want to join and be a part of.”

Tecumseh is set to play its home games at the University of Windsor Stadium.

The city of Guelph is set to make a splash on the L1O scene with Guelph United set to join the men’s division and Guelph Union entering the women’s fold.

Operating as two separate entities, the United and Union share ambition in advancing the game within the region, with the latter particularly driven to provide opportunities for females.

We are very excited to announce our addition to the League1 Ontario Women’s Family. Looking forward to our inaugural season in 2021 #guelphunion pic.twitter.com/7mKgglj2Fw

“For young girls that are athletes that want to aspire to be something, that doesn’t exist in Guelph at all,” Executive Director Sara Orrell told League1Ontario.com. “There’s absolutely a need and an appetite for it.”

Bringing an abundance of experience to Guelph United from his tenure as Head Coach of the University of Guelph Gryphons, Keith Mason hopes this newfound club can serve the area in all facets.

“It doesn’t matter what your goal is, we want to be your club for this area that you want to get behind and support,” Mason told League1Ontario.com.

With files from Brady Reid and Marty Thompson.