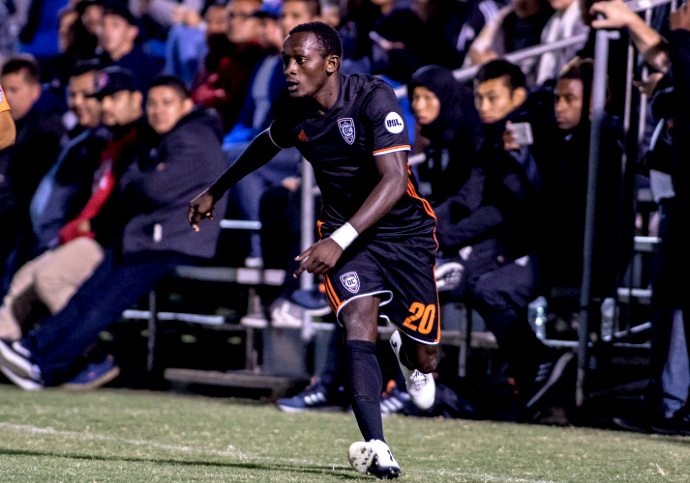 Jeannot Esua had a choice. He was at home in Cameroon, and there was interest from FC Edmonton, and also from a team in the Czech Republic.

How to choose between Europe or the northernmost city in the Canadian Premier League?

Well, Esua did what most people in his place would do. He Googled FC Edmonton. And, he liked what he saw. He liked the fact it was a team filled with young prospects, and that coach Jeff Paulus had spent years developing local talent. He liked the fact that the club had a history.

“I spoke to my agent and then I went on Google,” said Esua. “I found a bit of stuff about the club history, and I learned about the coach, Jeff, so from what I read I saw him as a person who helps young talents to grow. I saw FC Edmonton was a team filled with great prospects and had great ambition.”

While it’s hard to get a true reading on a team from simply watching preseason training sessions, Esua is standing out. His pace is noticeable. He’s an aggressive wingback/fullback who consistently wants to get up the pitch.

Two years ago, Esua spent the season with Orange County of the USL. But he was back in Africa last year, waiting for another chance.

Meanwhile, Paulus had an idea of the kind of player he wanted in that fullback position, he was simply looking for the right foot. When FC Edmonton was an NASL club, Paulus was the assistant to Colin Miller — and that meant Paulus would often be the first point of contact for agents. So, he’s developed a decent network over the years — and, in speaking to one of those agents, he learned about Esua. Paulus went back and looked at video of Orange County matches. He contacted people in Cameroon.

“People on the ground in Cameroon told me that, definitely, he could excel at this level,” recalled Paulus.

And the coach likes what he’s seen so far.

“He’s got pace for days,” said Paulus. “He’s a thoroughbred. He’s so athletic, he gets up and down the line. He’s brave, he wants to attack.”

And Esua said he’s already noticed some stark differences between Orange County and the Eddies. And, no, it’s not just the weather.

“Back in Orange County, it was a team. Everybody came in the morning and tried to be professional. But here in Edmonton it’s more like a family. We don’t want to be just a team. We want to take care of each other on the pitch and off the pitch.”

Cameroon, of course, is a nation where the Indomitable Lions are a source of great pride. In 1982, most soccer fans couldn’t find Cameroon on a map, but the national team — expected to be a doormat at the World Cup — drew Italy, Poland and Peru in the group stage. They didn’t win, but they didn’t lose, either. At the 1990 World Cup, Cameroon won Group B, then got to the quarter-finals, where England needed extra time to beat the Indomitable Lions.

Legends like Roger Milla and Samuel Eto’o have gone on to become international ambassadors for the nation. And, for young Cameroonian footballers, living up to their legacies is a challenge.

“Growing up in Cameroon was not all that easy, both as a person and as a soccer player,” said Esua. “As a person, we have a lot of challenges. The day to day activities are really tough and, as a soccer player, we don’t have all the facilities that you need to get to the top.

“Coming out from Africa is important. We have a whole lot of players and, if you get that chance to go out of Africa, it’s a whole new experience. And when you go out, you need to fight so you can try to keep up with the names of the bigger players who have been there and made it. You just have to go and try to make it the same way that they made it.

“Sometimes you don’t get your daily needs. As a kid, going to school is not that easy. You have to pay a very high amount for it. To get to medical facilities, it’s not easy, you have to pay a high amount for it. Being a soccer player, going into the academies, you need to pay to go to the academies. Even the balls and the pitch are not that conducive. We just try to work with it.”

Of course, as a slick fullback from Cameroon, Esua’s soccer idol is…

“He’s a very combative player. I like that,” smiled Esua.

An update from training camp:

Last week, FC Edmonton had four trialists in camp, with Paulus saying there was one roster spot left to fill.

That spot has not been filled.

A new player will be coming in on trial next week, and Paulus is also speaking to agents about internationals who might be interested in coming to Edmonton. With Tomi Ameobi now being a Canadian permanent resident, the Eddies have freed up an international roster slot.