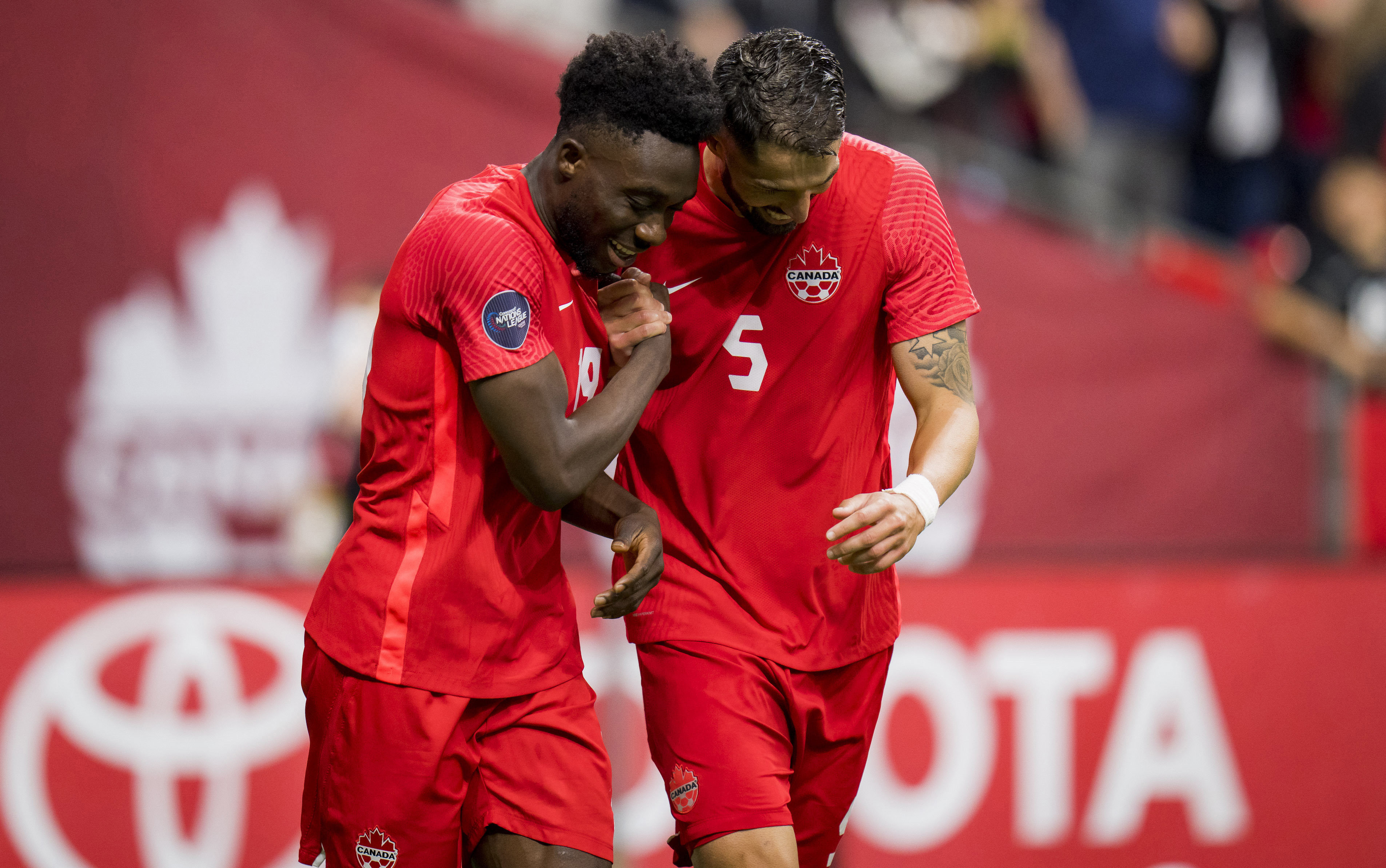 Canada Soccer by Bob Frid
By the Numbers: How set-pieces could make all the difference for Canada in tough World Cup group stage
2022-11-18
by
Charlie O’Connor-Clarke, Digital Content Editor (@charliejclarke)
CanMNT World Cup 2022

As Canada enter the 2022 World Cup, they knowingly do so as underdogs. Drawn into a fierce Group F alongside perennial powerhouses Belgium, 2018 finalists Croatia, and a plucky Morocco side replete with talent and experience, the Canadians know the odds are stacked against them.

Of course, the same was true in World Cup Qualifying. Few expected a draw in Nashville, and even fewer expected a draw at the Azteca. All along the road to Qatar this Canada team defied projections and, where possible, turned those odds in their favour — they forced Mexico to play on frozen Edmonton turf, and they took the U.S. to Hamilton.

At the World Cup — ostensibly the great leveller of circumstances — Canada will have fewer chances to create such advantages for themselves. That’s why John Herdman and co. must make the absolute most of any minor edge they can find.

One of those edges may come, as it did Thursday against Japan, from the dead ball.

STEVEN VITORIA from the corner! 😎#CanMNT equalize 1-1 vs. Japan as Vitoria connects on the set piece at the 21st minute

At its core, the set-piece is quite a pure, detached version of football: How well can one individual player kick this motionless ball? Can he curl it around a defender, or deliver it perfectly to a teammate’s forehead?

A well-executed set play — a corner, a free-kick, a throw-in, even a penalty — is far more complicated than that, but such situations are bound to come in almost any match. In many cases, set-piece efficiency can make or break a side, especially in tournament play.

Dozens of studies in recent years have estimated that set-pieces make up between 25 and 35 per cent of the goals scored in all of professional football. The 2018 World Cup in Russia, however, broke that pattern: just over 40 per cent of the goals (53 per cent in the group stage) at that tournament came from set-pieces, including corners, free kicks, penalties, and throw-ins.

According to FIFA, 30 of the 171 goals in Russia were scored off corners, compared to 45 of the 401 in the 2017-18 UEFA Champions League. Prior to that tournament, the average had hovered — as usual — between 25 and 33 per cent in the prior four World Cups.

Even in those previous competitions, though, the set play took on extra importance for teams — like Canada — who faced stacked odds as underdogs in their groups. When a team doesn’t necessarily have the quality to dominate an opponent in open play, sometimes their best bet is to draw a foul or win a corner.

Since France 1998 (the first World Cup to feature 32 teams), 17 sides have advanced from the group stage that were ranked outside FIFA’s top 30 at the time of the draw (Canada were 38th this time). Of the 72 goals those teams have scored en route to securing knockout round qualification, 26 were from set-pieces — 36 per cent, a hair above the average.

Recently, those numbers skew even higher. In the last three World Cups, seven teams outside the top 30 made the knockout round, and 44 per cent of their group stage goals were set-pieces. Japan, 44th at the time, were the only such side to get out in 2018, and two of their four goals in Group H were dead balls (one penalty, one corner).

Such goals could be pinpoint crosses from corners, or penalties, or chaotic bundles over the line after a poor clearance. The true danger of a set-piece isn’t always in how perfect the routine is, but in the fact that a ball is being put into a dangerous area for free, with more players than usual in the box. Those moments — whether one of brilliance or one of error on the opponent’s behalf — can make a team sink or swim in a World Cup group stage.

Since the tournament expanded to 32 teams, 288 matches have been played in the group stage. Of those, 188 — just over 65 per cent — have been decided by no more than one goal. So, just one well-executed corner can be the difference between advancing and elimination.

There’s reason to believe that the 2022 World Cup could see the art of the set-piece in the spotlight again. This being a winter tournament, most players only joined up with their national teams less than two weeks before the tournament begins.

Already, the international game is rarely a bastion of complex tactical football — such is the nature of sides that convene once every couple months or so. Set-piece routines are often simpler to develop and improve in limited training time than open-play tactics, which gives them extra importance in international play, but such a difference may be more pronounced in Qatar.

With teams having so few training sessions immediately before the World Cup, not to mention the heat that might take a toll on players in Qatar, expect plenty of chances — whether designed or arising from chaos — from set-pieces at this tournament.

Of the 34 goals Canada have scored since the start of the Octagonal stage of Concacaf World Cup Qualifying, 10 came from set-pieces — a healthy average of 29.4 per cent. Four of their last 11 goals were dead balls, including Steven Vitória’s corner kick finish and Lucas Cavallini’s brave panenka against Japan.

Timely set-play goals were a major factor in Canada’s qualification campaign, no doubt: Tajon Buchanan’s header from a corner against Panama was later overshadowed by Alphonso Davies’ absurd go-ahead goal, but it was a key moment. So, too, was Cyle Larin’s penalty against Honduras, and — perhaps more than any other — Stephen Eustáquio’s delivery to Larin in Edmonton against Mexico.

In fact, Canada scored more set-piece goals (six) than any other side in the Concacaf Octagon. The dead ball is undoubtedly an area of focus for John Herdman — he’s had his staff hard at work since he took over putting players through their paces on a variety of routines and set plays. Since the World Cup draw last April, Herdman has tasked some of his assistants with scouting each of Belgium, Croatia, and Morocco, and part of that will undoubtedly be trying to pick up trends from each side’s set-piece tendencies.

Questions do, however, linger over the specific personnel for Canada’s set plays. The right-footed Stephen Eustáquio will undoubtedly take free-kicks from distance to swing into the box — as he did to create goals against both Mexico and Jamaica for Canada.

Alphonso Davies has typically been the left-footed option, and such is his right as the superstar of this team, but he certainly doesn’t take corners for Bayern Munich. It was a Davies corner that assisted Canada’s equalizer vs. Panama, but since then he’s struggled somewhat with his delivery — most notably against Uruguay in September’s friendly, where he struggled to get the ball into dangerous spots.

The player who may have made the most compelling case for himself as a set-piece weapon before the World Cup is Junior Hoilett, whose corners were almost unilaterally excellent against Japan on Thursday. He’s always had a knack for hitting a dead ball, and with him being in top form at the moment it’s hard to argue against him having a few opportunities in Qatar — especially with the fitness of both Eustáquio and Davies somewhat in doubt.

When it comes to specific matchups for Canada, they may have to get creative to score from set-pieces in Group F — they’re unlikely to have a height advantage against any of their opponents, although no team has a defender taller than the 6’5″ Steven Vitória.

However they go about it, Canada will head into this World Cup knowing that the dead ball can — and, perhaps, must — be an area of strength if they’re to earn points in a scrappy group. The greatest World Cup Cinderella stories have rarely come from jaw-dropping, gorgeous football or playing a top-quality team off the park.

The underdog teams that go furthest are those that get the details right, and score a timely set-piece or two.