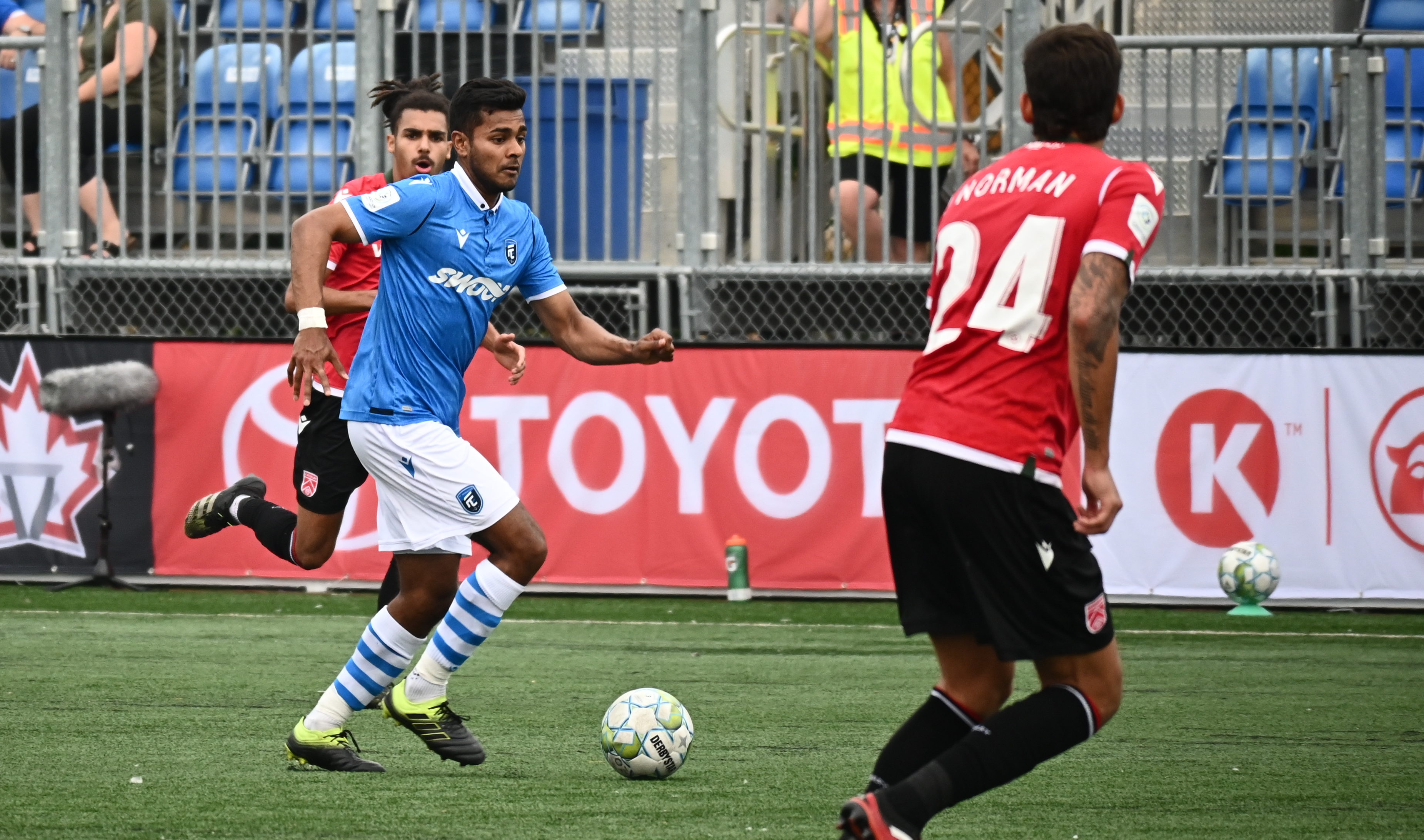 Growing up, looking to pursue a career in soccer, it was hard for FC Edmonton’s Shamit Shome to find many professional soccer players that looked like him.

The 24-year-old Edmonton native, who holds Bangladeshi roots, had friends of similar origins in his youth clubs, but beyond that, there was a dearth of professional players of his or other Asian backgrounds at the top level for him to look up to and emulate.

So as he pushed his way up to where he is now, which is to now play for his hometown team after a stint in MLS with CF Montréal (then the Impact), it means a lot for him to carry such a torch of being a player of Asian origin playing at the top level.

Knowing what it would’ve meant to him growing up in Edmonton, he hopes that what he’s been able to accomplish can be an inspiration to the next generation of kids, giving them that model that he would’ve loved to have had growing up.

“There weren’t a lot of people that looked like me that were playing soccer at a high level,” Shome told CanPL.ca. “Playing at the youth level, I did have a few friends that looked like me that were playing, but once you start getting to the next level, the academies and the national team, it’s very uncommon to find Asian players within the system.”

Because of that, it opens up the question – why is that so? Why have there been typically fewer players of Asian origin playing at the top level, especially if they’re well represented at the youth level?

It’s not for a lack of talent, as some of the top Asian national teams have all sorts of players playing at the highest level, and it’s not for a lack of numbers, as Canada’s 2016 census reported that almost 20% of Canadians, or one in five, have Asian ancestry of some sort.

Yet, when it comes to Canadian soccer, that representation just hasn’t been there, especially at the top level, with there never really being more than a handful of Asian players playing at a time. Due to a mix of lack of opportunity, visibility and exposure, it has made it hard to crack the top level for players, leading to such a void.

With more players like Shome, or Forge’s David Choinière, who has Filipino roots, making a difference for their clubs at the top level, especially in the CPL, the representation is starting to get better, something that both Shome and Choinière are quite happy to see.

“It’s something that I have a lot of pride for, representing the Asian community,” Shome explained. “Because it’s not very common, so I’m just (happy) to be a role model for the next generation to show that guys like me, guys that look like us, we can do it.”

“You see less of some people in certain areas, but it’s going to keep growing,” Choinière added. “I think there are a lot of Asians that do a lot of big things in the world, and it’s just a matter of time before we all come together.”

At the same time, however, this is just the start of what’s to come in that regard. While the player pool is slowly growing, more work is still to come in expanding it, as well as getting more Asian representation in refereeing, coaching and at the executive level, where things are also lagging behind.

That’s something that Shome feels is the next step to really push things forward, a sentiment that the HFX Wanderers’ Pierre Lamothe, who has Vietnamese roots, strongly echoed.

“It also has to be about raising awareness to say, hey, refereeing, coaching, these are interesting things, people can be aware and open to the idea that you don’t have to necessarily be what’s expected of you as an Asian growing up, where you’re expected to be an engineer or a doctor, you can follow a different career path,” Shome explained. “For representation, organizations need to be open to having people of colour or some Asian backgrounds to represent them and being able to put them to do the right job.”

Especially in light of what’s happening right now with Canadian soccer, where both of Canada’s national teams have been making big strides at the highest level, first with the women’s team Olympic gold medal, and now with the men’s team’s historic World Cup qualification, it’s important that representation continues to grow alongside that.

Seeing that a lot of Canada’s success has come off the back of their diverse group of players, that’s only fitting for a country that has always wanted to rely on the strength of their mosaic in the biggest moments, just showing the importance of having such representation in different areas of their team and staff.

“I think it just shows that the game is improving in Canada,” Lamothe said of Canada’s success. “Players are coming from everywhere, from every background, coming together to qualify for the World Cup. I think that’s great.”

“In Canada, you’ve got people from all around the world,” Choinière added. “And Canada is a beautiful part of it, we all come together and form a nice team with players coming together, it’s a beautiful thing, and they all work together so we can try to be the best country in the world.”

Now, as Canada continues to push forward at the National Team level, and the game continues to develop and grow at the domestic and club level, growing that representation has to remain top of mind.

Especially for Asian communities, who remain underrepresented at key levels of the sport, growing their representation would be huge, giving a chance for the next generation to shine.

So as Asian History Month wraps up, it’s a good reminder of why it’s important to continue that push to get more Asian representation, helping see more players of Asian heritage push their way into various roles, in all areas of the game.

There remains work to be done, no doubt, but Shome feels like things are trending in the right direction, giving him hope that more and more kids will be able to relate to his story and follow in his footsteps, further improving things in the future.

“For the next generation, to see me doing what I love and being somewhat successful at it, I think it’s inspirational for them,” Shome said. “It motivates them to say ‘Hey, I can kind of break the boundaries, too, and I don’t necessarily have to go down the path that was kind of set out for me, instead, I can take my own path’.”

To learn more about Asian Heritage Month, held in the month of May every year, head to this link.