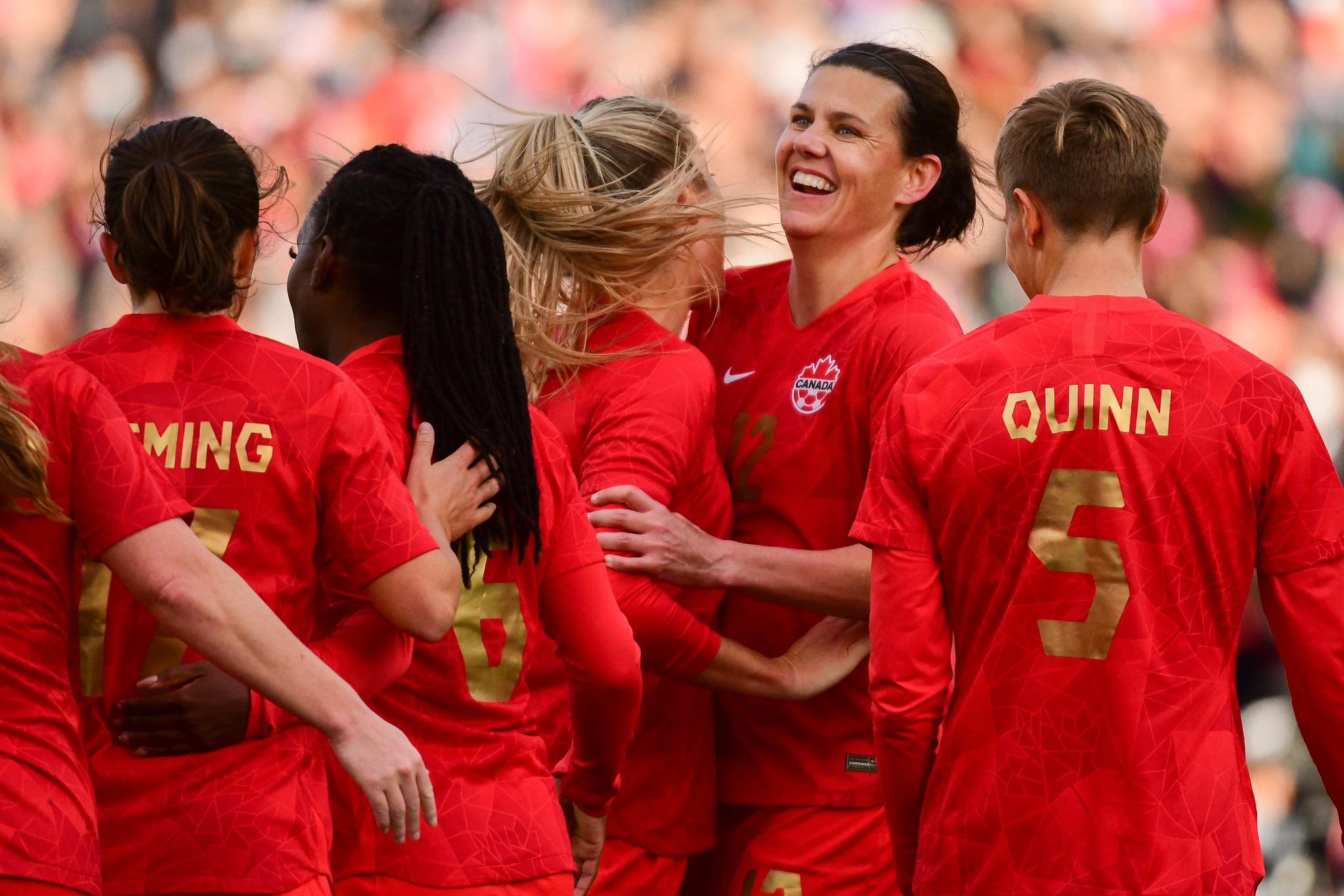 JACK: Sinclair shines the brightest on a Golden day in Ottawa
2021-10-23
CANWNT News

Sometimes you will never know the true value of a moment until it becomes a memory.

That’s the thing about moments and memories. What can seem so valuable at one time, often can seem pointless soon after. What can seem innocuous at the time can stay with you for far longer than you ever imagined. Every now and then, though, there are items and reference points that are treasured forever. This was one of the days for Canadian Soccer.

If you asked thousands of people outside TD Place Stadium in Ottawa between 1pm and 3pm on Saturday afternoon they may have told you the most valuable thing in the area was a parking spot.

Once they found one and took their seats inside they will have discovered that for the players the most precious item was in fact a large black bag situated to the left of Canada’s bench.

Inside it were 20 small, soft white bags that sat empty prior to kick off. They have been empty a lot this week and that’s what happens when you bring something to show people at a party. Home to Olympic Gold medals from Tokyo 2020 they would have to wait to be filled as the medals, proudly wrapped around the necks of the Canadian Women’s team, were on show as each winner was paraded out individually on a cool, but sunny, afternoon in the nation’s capital. Footballers will tell you that their sport really is about the collective and they don’t get to have individual moments, like a boxer walking out in the ring, but it was fitting these champions had their moments in the sun and it was no surprise the loudest cheer was saved for the last, captain Christine Sinclair.

Just like in Tokyo, the medals stayed with the players while they sung the anthem. This time, though, fans were in the stands and plenty of them. Canadians on hand to celebrate their Olympic champions, finally back on home soil for the first time since 2019. A valuable moment not lost on any at the stadium. Billed as ‘the celebration tour’ for a reason it was clearly a way to celebrate a group of winners, but it felt much more than simply that. A unique bond between a team and a country that both sides needed before a ball was even kicked.

Eventually, though, a game had to start and suddenly the soft bags were out as 19 players ran to the side of the bench to place one of their most precious keepsakes away. Captain Christine Sinclair took her place in the middle of the field for the coin toss and was the last one to run to the bag and remove her medal. It was the first and last time she’d be behind everyone else.

New Zealand kicked the game off and quickly it become apparent who the most treasured player was to watch on the field. At 38, Sinclair is no longer the ruthless number nine she once was and hasn’t played that role for some time. Instead, Sinclair operates as one of the most intelligent false nines you will ever see on a football pitch. Not only does this allow forwards Nichelle Prince and Deanne Rose to play wider and pull opposition’s centre backs into unfamiliar spaces, it also gets Sinclair to play closely with another supremely intelligent footballer in Jessie Fleming. When you watch both players occupying space in between the lines it is not hard to see why Canada has so much success in attacking transitions with both picking up valuable spaces to ignite attacks.

Sinclair has what all true greats in all sports have, remarkable instincts. It has served her well for years and it served her and Canada well again on this day as she consistently found the right place to be in at the right time. She has always loved the ball at her feet and the ball has always cherished time with her. As early as the 12th minute, before Janine Beckie had crossed the ball into the box, Sinclair went to the back post where she felt she would be rewarded. She was right, receiving the ball and attempting to get beyond Daisy Cleverley, the New Zealand midfielder, who handled in the box.

As the stadium celebrated, the ball rolled away towards the touchline. Noticeably, it was Sinclair who walked towards it, like a friend for life never losing it from her sight. For a moment it was here where she left us guessing the way she has puzzled opponents throughout her career. Would she take the penalty? Would this be her moment at home? Typically, it was not going to be. Fleming, whose penalties had been so crucial to Canada claiming Gold in Tokyo, would be given the ball from Sinclair, forever a star more comfortable in the shadows.

Canada gained a lead they would never relinquish, eventually running out 5-1 winners. Sinclair would get her moment in front of goal, scoring the game’s second goal, a play some will see as a mistake from New Zealand goalkeeper Erin Naylor, but others will astutely notice no other player on the pitch would score. As the ball was played deep to the back post, Sinclair crucially ran to space she anticipated the ball could fall into. How right she would be, a touch with the right and a finish with the left followed and suddenly it was 2-0. For the 188th time she had scored for Canada.

It was a game billed as a friendly and of course the scoreline never really was that important, as long as Canada could win and send fans home happy. However, they would leave with much more than emotions that can come simply from winning a game. That’s what happens when you watch greatness. It stays with you, far longer than where you remembered you parked your car or longer than a bag can sit holding 20 Gold medals next to a pitch.

Christine Sinclair will never tell you it is about her. On a day where it was the team who people came to celebrate, those who watched her closely will never forget how valuable that was.