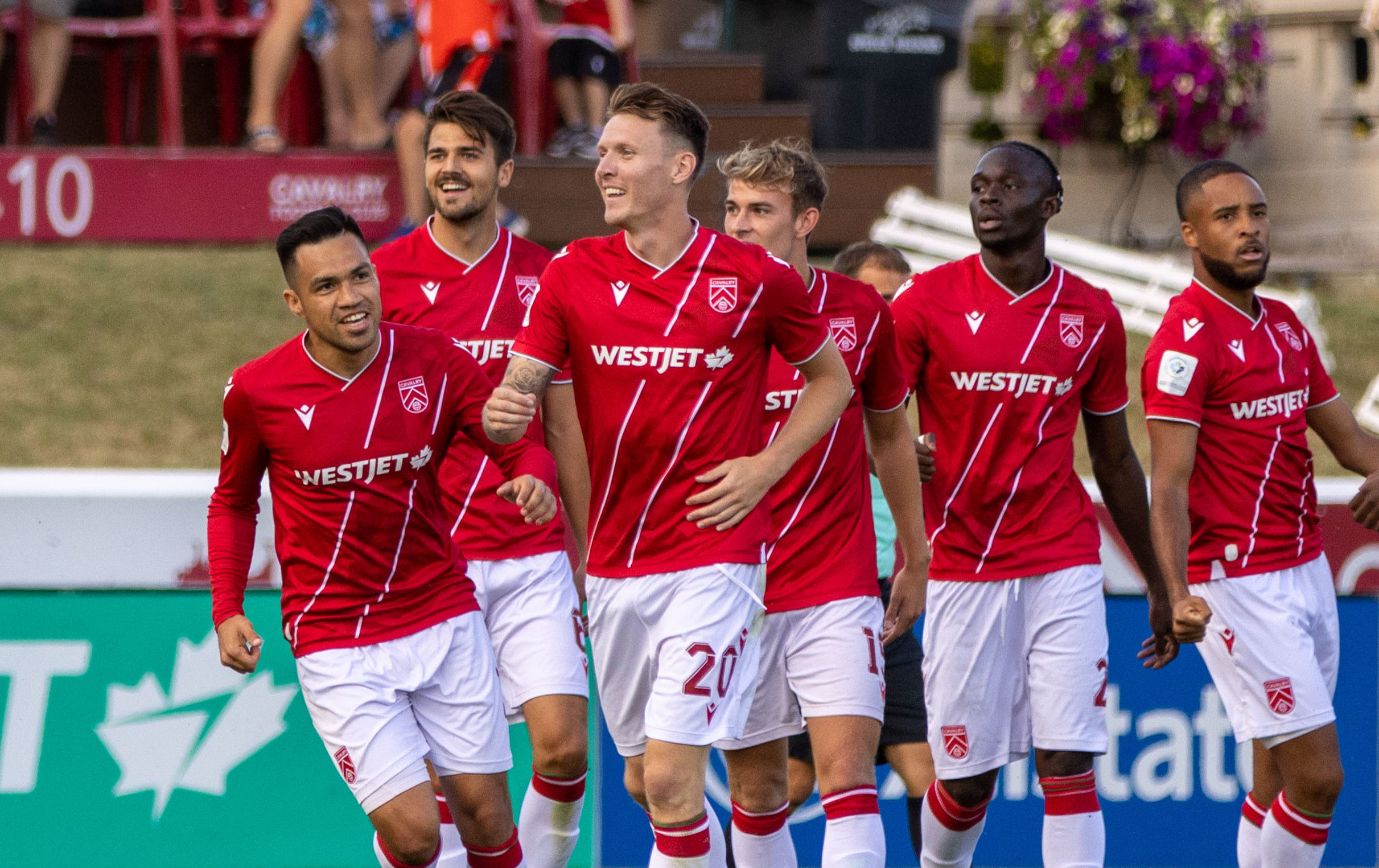 Ten years ago, Cardiff City fans at Wembley Stadium were sent into a state of euphoria. Nearly 20 minutes into the 2011-12 League Cup final against Liverpool, the scrappy underdogs from the Championship took the lead in front of 89,000 fans on one of their biggest ever occasions.

Wheeling away in celebration was their 20-year-old attacker Joe Mason, a signing earlier that season from his hometown club Plymouth Argyle, and the player who had scored the goal that sent Cardiff through to the quarter-finals earlier in the competition. He had slipped in behind the Liverpool backline, and after being played through by future Vancouver Whitecaps striker Kenny Miller, Mason fired the ball through Pepe Reina’s legs with his first touch to give The Bluebirds an unlikely advantage.

Mason would play 91 minutes in the match, which would end 2-2 before Liverpool won on penalties, a heartbreaking defeat for Cardiff after their remarkable run just to get to the final.

“It was a while ago now we’re looking like 10 years ago, but I was young and had no fear going into the game,” Mason said to CanPL.ca this week. “I grew up as a Liverpool fan as well, so that was a dream come true to play against people like Steven Gerrard and Jamie Carragher, these legends of the club.

“The actual day was unbelievable. Unfortunately, we lost on penalties, but scoring that goal is something that I’ll never forget. That’s probably the best day of my life in terms of football.”

It’s that experience, of scoring against one of the best clubs in the world in one of the sport’s iconic cathedrals, that Mason still leans on as the now 31-year-old plies his trade in the Canadian Premier League a decade later.

Mason would spend a few more years at Cardiff, followed by stops at Bolton Wanderers, Burton Albion and Wolverhampton Wanderers in the Championship and Portsmouth and MK Dons in League One, as well as a brief stint in Major League Soccer with Colorado Rapids —  scoring everywhere he went — before ending up at Cavalry FC ahead of the 2021 Canadian Premier League season.

Although limited to just 16 appearances in all competitions in his first season with Cavalry — after joining the team late and missing a handful of games in the middle of the season with an injury — Mason was still able to provide eight goals and an assist. His footballing quality was clear to see, and his track record in the sport alone was enough to strike fear into his opponents and give him a mental advantage at times.

One of Mason’s biggest strengths is his movement off the ball. His ability and awareness to drift in and out of different pockets of space, either to open himself up to receive the ball as he did against Liverpool all those years ago, or to drag a defender out of position and free room up for someone else, is a major part of Cavalry’s attacking identity.

Look no further than his brace against Pacific FC last year, where quick, methodic runs between defenders made him nearly impossible to track, and he wreaked havoc on The Tridents’ defenders as a result.

“I try and not give the defenders a minute’s peace and keep them moving, and if I can’t create space for myself, I do it for someone else. That’s ended up with me getting quite a few chances to be fair.”

After another strong campaign, Cavalry would finish the season in second place, securing a spot in the playoffs and a semifinal match against Pacific, this time at Spruce Meadows. After an intense ninety minutes in which Terran Campbell and Karifa Yao traded goals on either side of halftime, the match would require extra time. A lapse of concentration was enough to end Cavalry’s season, as in the extra period the defenders switched off when they thought a ball was going to cross the line for a goal kick.

What happened instead, however, was that Pacific’s Kunle Dada-Luke was able to keep the ball in play, and fired a cross off of Marco Carducci and into the Cavalry goal, sending The Tridents through to the CPL final, which they would win over Forge FC to raise their first North Star Shield.

DRAMA on the 105-minute mark of this 2021 #CanPL PLAYOFF clash, as @PacificFCCPL get the go-ahead goal vs. @CPLCavalryFC by the narrowest of margins 😬

It was a tough defeat for Cavalry, made worse by a handful of missed opportunities earlier in the match in front of their home fans. Nearly a year later, that match is still brought up regularly as an example of “playing to the f-ing whistle,” to quote head coach Tommy Wheeldon Jr.

“Especially this time of year, that game starts cropping up again,” said Mason. “It was a disappointing end to the season for us, and we felt like we could have gone on and won it. This year, the league’s very competitive, probably more competitive than last year, and we have more motivation this year to go that next step — get to the final and then obviously, when we’re in the final, to win it.”

One thing was absolutely certain from the moment that match ended, and has really been clear since before the inaugural 2019 CPL season kicked off — Cavalry are a motivated club, hungry for success and possessing the desire to be a perennial contender in this league. While a first North Star Shield has thus far eluded them — finishing as runners-up in 2019 is the closest they have been — they have always been there or thereabouts, never finishing lower than second in the regular season.

Second place in the table is where Cavalry finds themselves now, with just three matches remaining in the 2022 regular season. They can clinch a playoff spot as early as this weekend if York United defeats or picks up a draw against Valour on Friday night and the Cavs take care of business and pick up three points at home against Atlético Ottawa on Saturday.

They’re coming off a 1-0 win away to provincial rivals FC Edmonton, in which it was Mason who scored the winning goal — a header to redirect a cross from Roberto Alarcon into the back of the net.

The goal snapped a month-long scoreless run for the Cavalry striker. Five matches without a goal is far from uncommon for a professional footballer, but for someone with Mason’s pedigree, and the weight of expectations he puts on himself, it was good to get himself back on the scoresheet.

“It had been a few games without scoring, so it’s sort of playing in my mind a little bit,” he recalled. “I think that’s natural for any striker, but I went to that game pretty confident I’d score. Even if I’m scoring every game, I’m still putting pressure on myself to keep scoring. Nothing changes for me and I keep doing the same things whether I’m scoring or not. I’m confident eventually the goals are going to come either way, so that’s the way I sort of combat going through a ‘drought’, you could say, just keep doing the same things and don’t change.”

He added that breaking the scoreless run against their rivals was also pleasing, and that he hopes his strong history against FC Edmonton will continue.

In fact, that was Mason’s sixth appearance against FC Edmonton, and his sixth goal — the most he’s scored against a single opponent in his career. Not only is that tally impressive, but he’s scored in every single match against The Eddies in all competitions.

“It’s definitely a game that you don’t need any motivation for,” he said. “It’s a huge game for our fans, and also, it’s a very difficult place to go. You have to make sure you have your mindset right going into the game, and so far since I’ve been here, and in Cavalry’s whole history unbeaten, so I think we’ve got that right so far.”

As Mason ran toward the corner flag to celebrate, he did what has become a trademark celebration, putting his hand over his face. It’s a celebration that Myer Bevan has also used when he’s scored this season, and is something that began in preseason earlier this year.

“Me and Myer, we started this in Mexico and preseason,” Mason recalled with a laugh. “So I actually got pinkeye in Mexico, and I was scratching my eye a lot and always had my eye covered. He made a joke that we should do that as our celebration and he’s done it first actually. It’s just sort of carried on and it’s gathering a bit of pace now.” 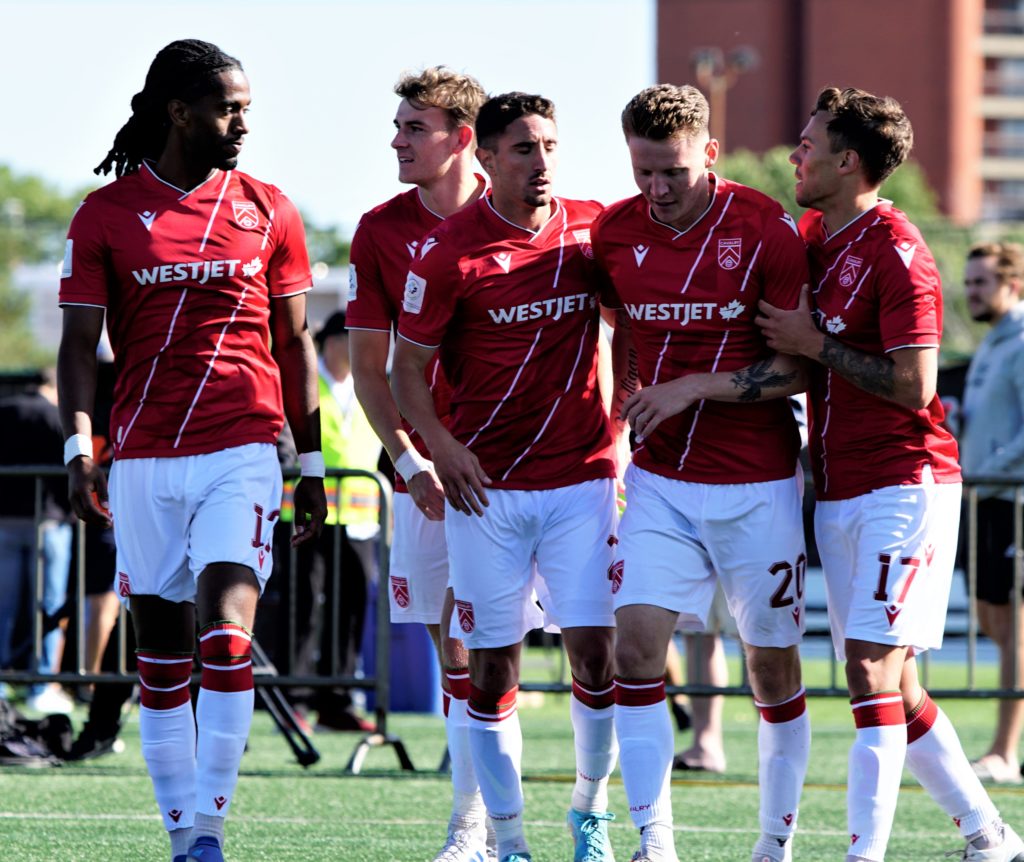 Mason and his teammates celebrate his goal against FC Edmonton on the weekend (Photo: FC Edmonton)

Mason says it’s a priority that they not only secure that playoff spot as soon as possible but do so by playing good football so they can enter the playoffs in good form. The last time Ottawa visited Calgary they left with a 3-0 victory, a result that Cavalry is adamant cannot happen again, especially at this stage of the year.

“It’s huge, going into this end of the season with momentum is massive,” he said. “It’s a big, big game this weekend, we can’t deny that Ottawa are a strong team, they beat us here at home last time quite convincingly, even though we had a fair share of the ball. It’s going to be a difficult game, we know that but we’re well prepared and confident going into it.”

As one of the senior players on the team, Mason is using that aforementioned experience in the sport to his advantage, and to the team’s advantage. Cavalry’s squad has some younger, more inexperienced players mixed with some veteran leaders, which the Englishman believes is a strong formula for building a team that can go all the way.

“I’ve experienced these sort of high-pressure situations, and it’s something that I thrive on,” Mason said. “I know as a squad it’s something we want to reach and we want to achieve and we believe we are a championship-winning team. Now it’s about doing it in those high-pressure situations, it’s the first time for a lot of  the boys, but I believe we can do it.”

Should the Cavs return to the playoffs as expected, it becomes a dogfight between them and the three other clubs that finish above the playoff line to narrow it down to two teams, and eventually a CPL champion.

As Mason said, Cavalry firmly believes they have what it takes to lift the North Star Shield, and will be disappointed at anything less. They have the squad to do it, but now comes the test of their mental strength, which let them down in the semifinal a season ago. This year the playoff format has changed as well, with teams playing two legs in the semifinal before a one-off final, something which Mason says is “fair for both sides” and “a good progression for the league”.

Cavalry will also receive a boost on the pitch, as Myer Bevan is one of the players expected to be returning to action over the final weeks of the season after an injury has kept him out of the side for a while, while Sergio Camargo is also nearing a return.

“We’ve got a very strong squad,” said Mason. “It’s all about mentality at this time of year, but we do have players who are coming back fit as well, some important players. They’re coming back at this time, so that can be very important for the run in. It’s just about having the right mindset and being brave.”