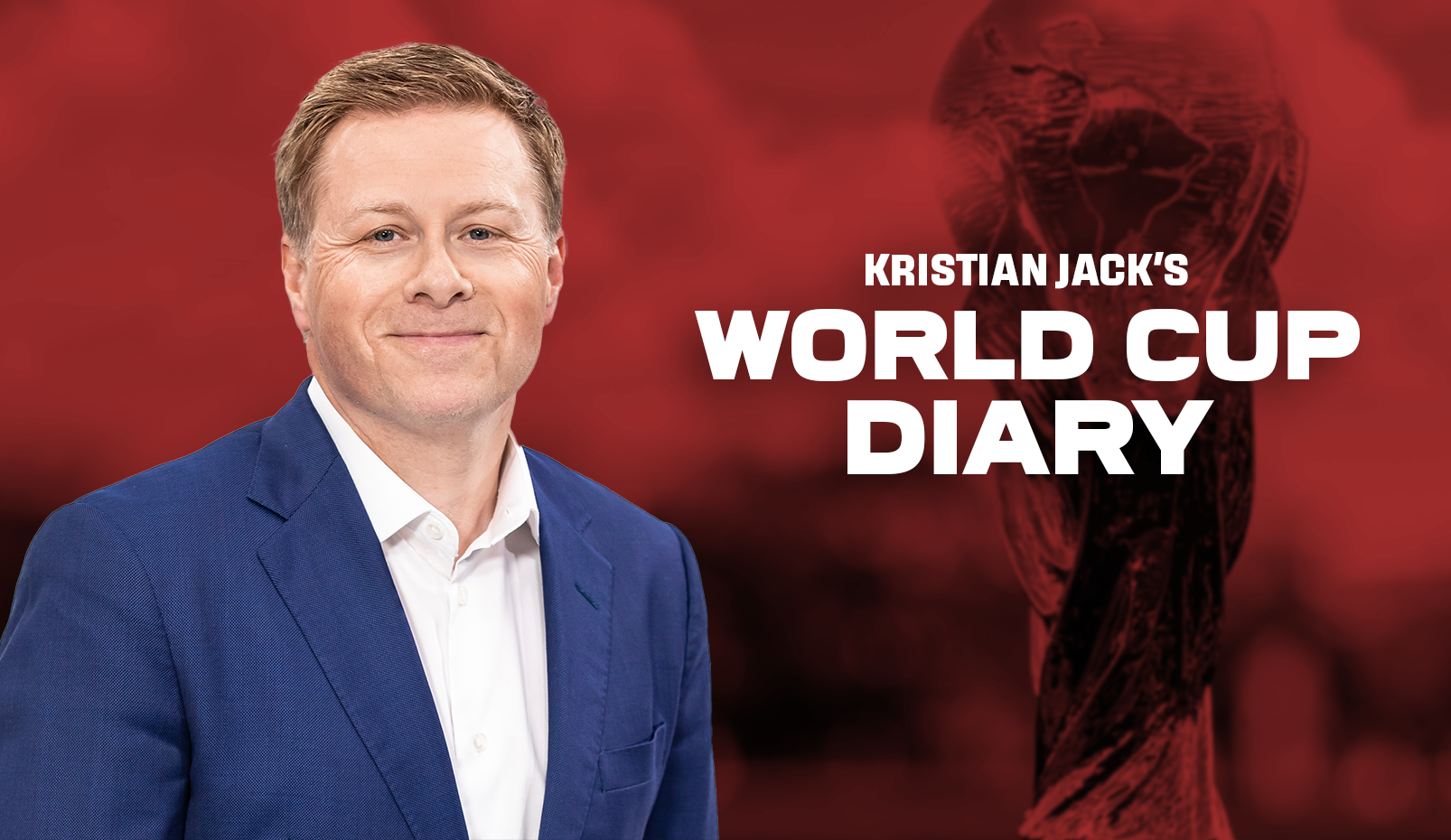 The opening day of the World Cup began for me today at 3:23 a.m. Missing hours of sleep for the past two nights helped reach the bed earlier, but jet lag hit hard in the middle of the night and as NHL games played out on a Saturday night in Canada the sun soon rose and started a new day here in Qatar. Time for the football.

It was a morning for reflection. I first thought of the early morning of December 9, 2005, when I left The Score’s Christmas staff party and headed home in a snowstorm just powerful enough to be admired and not cursed. Shovelling the driveway of the fresh show I couldn’t think of sleeping, knowing my wife and I had three match tickets for the 2006 World Cup and were just hours away from finding out who we would see. It was like Christmas Eve. I was fortunate to be working in the media at the time, but the fan inside me never really left and this was the day to find out who we would watch and which supporters of different nations we would mix with to fully experience the World Cup.

How I felt that day is no different to this one. Today it is time to visit a World Cup match.

Like everyone else, I watched on at the appalling nature of the FIFA President’s remarks on the day before the World Cup and many of us here often look at each other in bewilderment that this is where we are, covering such a fabulous competition. I reminded myself of our 2010 World Cup Tonight coverage at The Score when, alongside James Sharman and Sid Seixeiro, we reported on the bid for the 2022 World Cup. I don’t remember everything I say on television, but I remember calling it ‘no chance’ that Qatar would land this prestigious event. How naïve.

Yet here we are, and although we can sit here for days naming countries who should be hosting such an event it is time for the games to begin and to enjoy reporting on them. I remain extremely grateful to be here, humbled Canadians care what I say and see and although the games are played in the backdrop of controversy, I know there are other areas of the media, far more specialized in those areas than I am, covering that if you want it.

Twelve hours after waking up, I passed the scene of Saturday’s press conference on the way to the bus area to travel to Al Bayt Stadium, a drive just under an hour from the Qatar National Convention Centre that is hosting the media in Doha. Remarkably, this is the furthest stadium away from Doha in this World Cup. The proximity of the rest of the stadiums means this trip is a little like leaving the ‘Vancouver-area World Cup’ and travelling to Abbotsford, or Hamilton from the ‘Toronto World Cup’, for example. The unique nature will allow us to visit two games per day sometimes, of which more will come in this diary on later days.

Today, following a change in the schedule after the World Cup draw, we have just one match and with all due respect to Qatar and Ecuador it is good thing that this match is given the spotlight that it is needed because it is the kind of game that would have been drowned had they played on the same day as the likes of England, Netherlands, USA and Wales, as originally planned.

Arriving at the stadium it was refreshing to see football fans in their colours and once the reasonably entertaining opening ceremony ended it appeared Qatar was finally ready to host a World Cup.

Yet, there was one real problem. The whistle had blown, the game had started but Qatar wasn’t anywhere near ready. Almost immediately a direct ball into the penalty box wasn’t dealt with by the hosts and the pattern was set.

Ecuador would go on to win key headers on their way to dominating the opening phases. While Qatar Airways signs draped around the advertising boards, Ecuador took it literally and kept sending long balls into the sky, winning header after header and every second ball.

Goalkeeper Saad Al Sheeb punched balls he should have caught, ran for balls he should have left and picked the ball out of the net three times in the opening 31 minutes, all from Enner Valencia. Two counted, one disallowed for a narrow offside that I will remember more because of the two loud cheers from the crowd. One from real fans of the sport who knew right away when the referee whistled with his arm in the air for offside and another one from those who only knew it was disallowed once the players looked to restart.

They wouldn’t get to cheer for long. Valencia, arriving in great form for Fenerbahce, took his time to calmly slot a penalty past the hapless Al Sheeb and then had almost as much time to join Qatar Airways again, rising high and nodding the ball perfectly into the near post just past the half hour mark. Two-nil and the game was over. In 92 years of the men’s World Cup no host country has ever lost their opening game. It barely took 30 minutes here to change that.

Moises Caicedo, who played a sensational pass into Michael Estrada in the buildup to Valencia winning a penalty, spent the rest of the half running the show as Felix Sanchez’s 5-3-2 system with wide midfielders never got near him. The only blemish for the Brighton man was a yellow card on a day they were handed out often.

Halftime in the bathrooms, one local media member summed it up when someone bravely asked, ‘how are you?’:

Ecuador, now full of confidence, continued to shine in attack, lively Gonzalo Plata sending in a beautiful ball for Estrada soon after, but the big striker failed to convert. Romario Ibarra saw his shot saved soon after and the youngest squad to qualify from South America were comfortable.

For some of the local fans it was too much to watch. Many seemed to leave at half-time and a quarter of the way into the second half it was noticeable just how many people had headed home. With less than 10 minutes to go the stadium was close to half empty.  It may have been Sunday night and a short distance to get back to Doha but leaving early to beat the traffic is not something you see at a World Cup. I did wonder at one point whether the Qatar boss Felix Sanchez had joined them as he remarkably made no changes to a struggling team for the first 70 minutes.

In the end it was a game all too comfortable for Ecuador. Qatar, with Senegal and Netherlands still to play, already look like they will be finished when they wrap up their games in nine days’ time.

History tells us if you lose your opening group game, it is difficult to progress (73 teams have lost their opener under this format since 1998 and 67 did not progress). Tonight told us Qatar were simply not good enough and now go into survival mode for their next two matches.