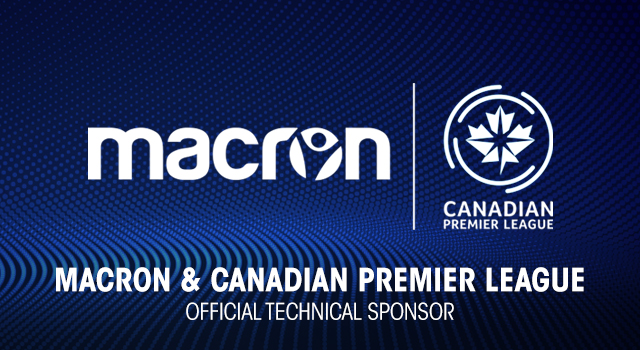 The Canadian Premier League has signed a long-term deal with Macron, a leader in the international teamwear market.

The first official step in the deal is at the Canadian Premier League #GotGame Open Trials currently being held across Canada, starting in Halifax on September 20, with trials in Montreal (September 27-28), Hamilton (October 1-2), Toronto (Oct. 11-12), Winnipeg (Oct. 18-19), Calgary (Oct. 25-26) and finally Vancouver Island (November 5-6). All coaches and staff will be wearing #GotGame branded Macron apparel.

“We are thrilled that a globally respected soccer brand like Macron has chosen the CPL as their most significant investment to date in North America as this represents a major shift in our market. We have partnered with Macron with the prospect of providing the most innovative soccer apparel for the players at every level of the game in Canada,” said CPL Commissioner, David Clanachan.

“As our exclusive on-pitch technical apparel provider, Macron will be instrumental in our collective efforts to grow passion for soccer from coast to coast.  We believe fans and players alike will be very pleased with the new look bespoke kits.”

Macron has a history of creating quality products, providing a high level of service and the ability to interpret the needs of the athletes. Macron is a leader in technical sponsorships within soccer as the official partner of UEFA within the Kit Assistance Scheme.

They also provide apparel to five teams across the Serie A, two teams in Champions League and three teams in Europa League, in addition to having a massive presence in La Liga and the EFL. Such Clubs include Bologna FC, Lazio, Sporting Lisbon, Real Sociedad, Nottingham Forest and Stoke City.

For Macron, sport means effort, sweat and willpower. “Work hard. Play harder” is not only the company’s motto, but also a philosophy which inspires the activities it carries out for teams, sportsmen and women with whom it collaborates, designing top quality technical products for them.

“We’re very excited about this partnership with the Canadian Premier League,” said Macron CEO, Gianluca Pavanello. “We’re thrilled to be entering into a market so receptive to soccer, and also because the deal with the CPL allows our team to work on a long-term basis on the development of new collections that we hope the players and fans will wear with pride.”

Macron designers are working in partnership with all seven CPL clubs, ownership and coaches in the design process of each club kit, developing bespoke uniforms with unique designs. The Canadian Premier League will be one of the few leagues that have custom-made kits league-wide.