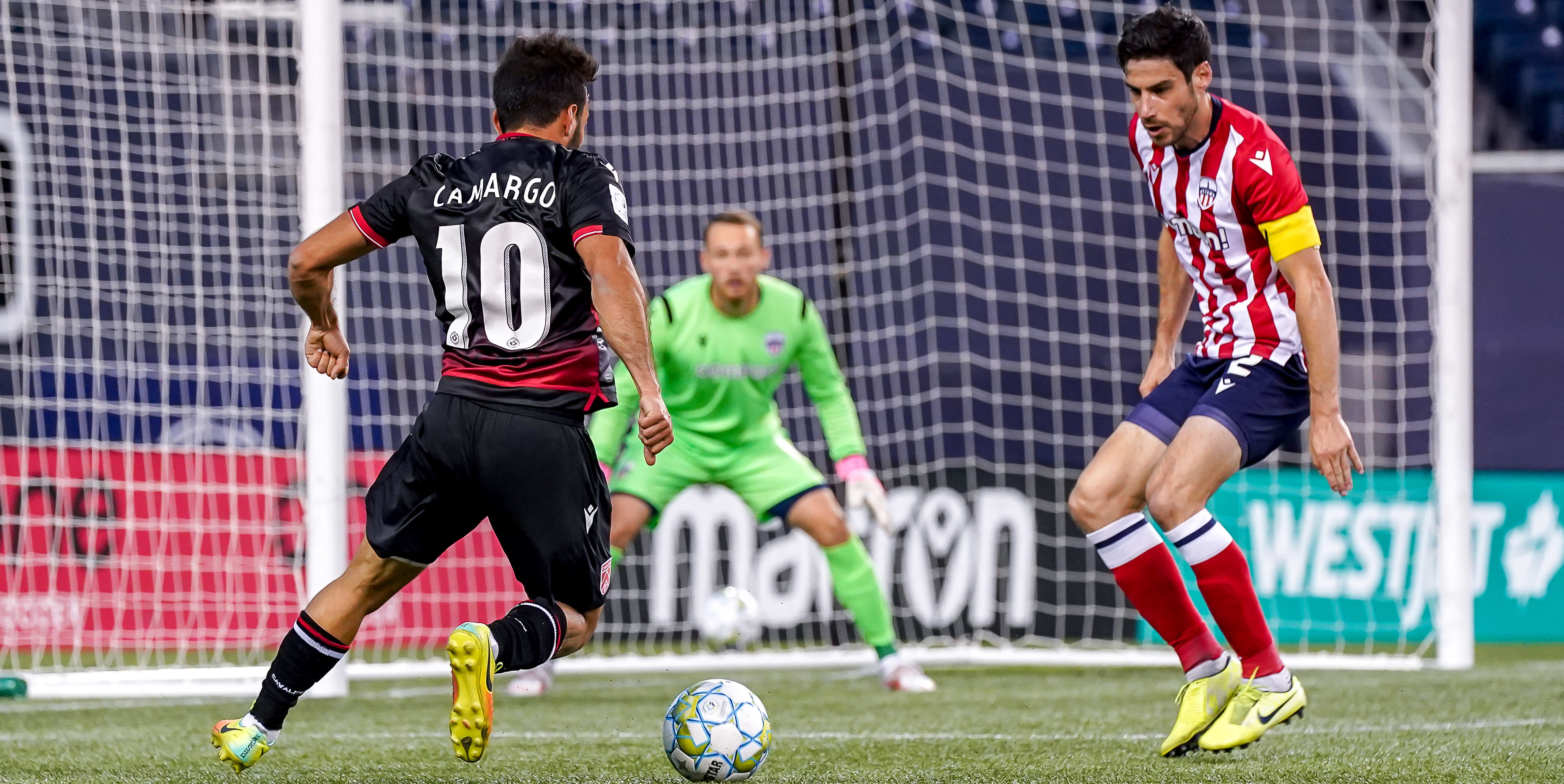 After a closely-contested hour, which saw both sides strike blows at the other, Cavalry FC ultimately ran away with their second contest of the 2021 season. Ahinga Selemani’s first-half brace gave his side the lead at the break, and Victor Loturi and Elliot Simmons went on to add the insurance markers late in the second half on a night where the Cavs were increasingly relentless as their confidence grew. Ottawa put pressure on their opponent with a beautifully-worked 24th-minute equalizer, but that would be the peak of their attacking exploits.

Tommy Wheeldon Jr.’s side had a well-earned reputation in 2019 for its high-pressing system, which was a major part of the reason they found themselves at the top of the table. That was back in full force on Wednesday; not only did their first goal come from Selemani pressuring the goalkeeper, but they were repeatedly able to force turnovers or rush Ottawa into playing the ball faster than they might’ve liked.

The Cavs’ fullbacks, Tom Field and Mo Farsi (numbers 3 and 21 in the graphic below), could be seen lining up extremely high and wide for much of the game, which had the effect of limiting Ottawa’s options for short passes to the wide areas and helped Cavalry push the opposing line backward when they had the ball. Cavalry continuously pushed forward and pinned Ottawa back as much as possible, and they transitioned smoothly between periods of energetic pressing and a more reserved strategy of waiting for moments to strike. Wheeldon explained that this is how he’s envisioned his club’s identity.

“In the hotel hallways, we’ll try and creep up on each other to surprise, so maybe it’s part of our DNA,” he joked postmatch. “We’re the Cavalry, we want to be on the front foot. We’ve said that from day one.”

He added that trying to stretch Ottawa out, both horizontally and vertically (partly with the help of those high fullbacks), was important as well, given how well-organized the Atlético side have been in the past. In fact, the press can be a double-edged sword: the Cavs’ biggest stumble in this game came as a result of Ottawa’s Miguel Acosta and Malcolm Shaw combining quickly after winning the ball in their own half and catching Cavalry too far upfield.

There’s no denying Atlético were missing a little of their previous bite in midfield here. Both Viti Martínez and Chris Mannella, two thirds of the ‘M&M&M’ trio that impressed so much last game against FC Edmonton, missed out on the starting XI, and although Mannella did enter at halftime, Ottawa’s ability to move the ball through the middle suffered greatly in their absence (in fact, Ottawa played up the centre a measly 18.8% of the time).

Ben McKendry and Tevin Shaw were deployed as a double-pivot together, and they both did well when they could get on the ball, but they weren’t able to spread the pitch as well as their teammates had in the previous match; certainly neither of them is the same kind of player as the injured Martínez.

Ottawa coach Mista conceded that the Spanish midfielder was sorely missed: “We missed Viti because he’s a very important player for us, we don’t have any other players who can play (his role) perfectly. Tevin did a great job, but we had some players a little bit tired, and small time for recovery. We tried to adapt, but it’s not enough.”

Certainly, this will be a side that prefers to command the ball. Ottawa like to assert themselves on a match with expansive possession, which Cavalry didn’t allow them to have on Wednesday, and as a result the Atleti side weren’t able to establish their game through the middle.

Cavalry comfortable playing out of the back

Cavalry came close to making some history on Wednesday night, with their 636 total passes the second-most ever made in a CPL match. They were extraordinarily comfortable in playing out of the back consistently, beginning with centre-backs Daan Klomp and Karifa Yao and extending to the dominant midfield trio of David Norman Jr., Victor Loturi, and Joe Di Chiara. In total, six of Cavalry’s 11 starters had a pass accuracy rating over 90%, and Norman was a hair under at 89.8.

The Cavs have been so comfortable with the ball at the back that their centre-backs have seen an extraordinary amount of the ball — Klomp, in particular, outstrips all other CPL players a staggering 200 touches through 180 minutes (courtesy of Centre Circle Data):

This structure, perhaps a little unlike some of the Cavalry setups we’ve seen in the past, has worked gloriously; Norman, often sitting just in front of the centre-backs but occasionally drifting to Yao’s left to form a back three (letting the left-back Field press even further up the touchline), was the main catalyst for Cavalry’s forward momentum, and both Loturi and Di Chiara dominated the half-channels on their respective sides.

“We’ve evolved a little bit,” Wheeldon said. “We still play with the same identity… We’re very technical this year, which allows us to manage the ball well, especially in a situation where we’re going to be dying around that 60 mark.

“Once you’ve got that, you’ve got a platform to start playing from spaces, and we found them well tonight.”

With players like Nik Ledgerwood and Elliot Simmons on the bench as well, the Cavs have a litany of options that can capably carry on this evolving aspect of their identity.

It’s strange not to hand out the laurels to the player who scored twice (and Selemani would be deserving too), but the 20-year-old Loturi’s performance in midfield was too good to overlook. He scored his first professional goal from a clever run, and prior to that he was a key cog in the Cavs’ midfield machine alongside Norman and Di Chiara. He won six of seven duels, led his team with five tackles, and finished with a sparkling 91.7% pass success rate. Overall, an excellent night for Loturi and his brother William Akio of Valour (who also bagged his first goal).