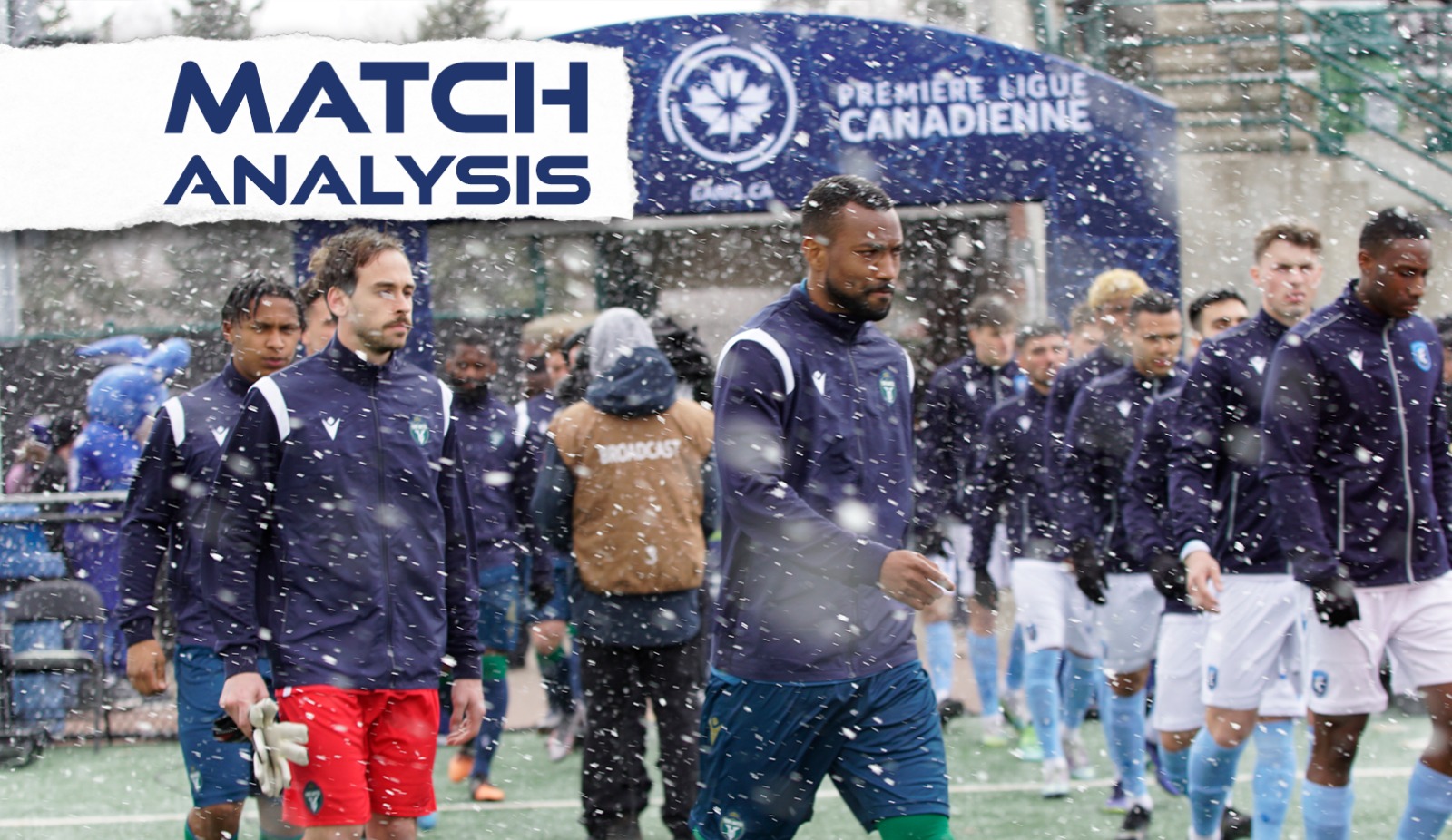 Match in a Minute or Less:

On a snowy Friday night in Edmonton, FC Edmonton and York United would make up for the cold temperatures that were in the air by providing a heated battle on the pitch, combining for a feisty 1-1 draw to kick off matchday 2 of Canadian Premier League action.

After a quiet first half, everything started happening in the second stanza, as York’s Osaze De Rosario scored a great goal in the 82nd minute, before Edmonton’s Masta Kacher replied with a tidy finish in the 84th minute.

But from there, a late red card from Edmonton’s Cj Smith would be all there’d be to write about at the end, leaving both teams to share the points on the night after a hard-fought contest.

Much as they did a week prior, FC Edmonton made sure to prioritize defensive stability in this game, and as a result, came out in a very stingy 5-3-2 formation. Not only that, but they sat deep in that formation as well, making it a priority to deny York space in their final third.

Having ridden that to a stingy 1-1 draw against Valour on opening day, they were hoping for a similarly strong defensive performance once again in this one, especially against a York team with all sorts of dangerous attacking options.

It wouldn’t be anything unexpected for York, who mentioned heading into this game that they were expecting something just like that, but despite that, they still struggled to break through it at times.

And thanks to Edmonton’s ability to close down space in the final third, as well as their desire to work hard off the ball, they sacrificed holding possession for some strong defensive stability, and that’d prove to be a very successful strategy for them, allowing them to grab another draw.

So don’t be fooled by the fact that York had 14 shots (7 on target) in this game, as many of them from distance or from non-dangerous positions, meaning that Edmonton were hardly threatened by their guests other than De Rosario’s wonder-strike, and as a result, that’d allow them to get something out of this game.

But that’s the sort of identity that Edmonton’s head coach, Alan Koch, wants his team to have.

Knowing that his roster might not be the deepest in the league, or filled with stars, having been thrown together last minute, they want to instead be known for their ability to show up on games and outwork opponents, and their efforts defensively in this game were a prime example of that.

“I’m a firm believer that when you come a little late into the process, the first thing that you have to focus on is your defensive shape,” Koch explained. “And I think people can see through our first two games that is something that we’ve focused on.”

Now, of course, the next step for them will have to be to try and strike a balance between that defensive solidity and the offensive side of their game, which won’t be easy, but it’s something that he’s certainly aware of.

So if they can find a way to find that extra offence, doing so without sacrificing that defensive side of their game, it’s not hard to imagine that these draws will turn into wins for them, allowing them to push up the table.

Having picked 2 points out of 2 games so far, when many weren’t expecting them to pick up any, they’re already further ahead than most might’ve thought they’d be, so now, all that’s left is for them to take that next step as they move along in their season.

“That’s our starting point,” Koch said of his team’s defence. “The other moments of the game, we’re going to work on them, and we’re going to build them, but we have to give ourselves a structure.”

After struggling to break open Edmonton’s low block in the first half, York decided to switch things up in the second half, bringing out something that they’d talked about in the preseason, but only used sparingly in their opening game – a 3 at the back formation.

It might’ve partly been out of necessity, to be fair, as Michael Petrasso was forced off at half time with what was described after the game as a knock, but by bringing in Max Ferrari to replace him, that would lead York to change their formation.

Having started out in a 4-2-3-1, with Petrasso on the left in the 3, Ferrari instead slotted in as the right wing back in a sort of 3-4-1-2, giving him full freedom to roam down the right-hand side.

And nearly immediately after that change, that allowed York to find some new life in the game.

In the first half, they did well to hold onto the ball, keeping by far the majority of the possession, but they added purpose to that in the second, allowing them to fashion together some better opportunities. As a result, they really started to push Edmonton further and further back defensively, giving them more room to operate in the final third, especially in wide areas (as you’ll see below).

So almost fittingly, it only feels right that their goal came as a result of that, because while De Rosario’s goal was certainly a moment of brilliance, he wouldn’t have had the space to unleash the shot that he did if Edmonton’s defensive line hadn’t been pushed back as it was on the play, partly thanks to that 3 at the back.

Because of that, you can only wonder if that might be something we see more of from York going forward now, as there is no doubt that the formation switch allowed them to change the complexion of this game in that second half.

Especially given the flexibility of some of their players that they have at their disposal, which means that they can handle the demands of such a formation, it’s certainly something worth pondering for Nash and his staff.

“Shifting to us building in a 3 (at the back) helped us get our wing backs involved in the game,” Nash noted. “It allowed them to get around the corners, and we got some good service into the box (as a result of that).”

Even if it’s a flexible 3 at the back formation that can turn into a 4, which is also something we saw in this game, the back 3 just seems to give York a bit more oomph in the attack, and given that they have just one goal through their first two games, that should only give them more incentive to want to keep running with the new formation.

Given that both teams lined up with duelling triangle midfields, with Edmonton going with their 5-3-2, while York elected to go with a 4-2-3-1 that’d sometimes morph into a 3-5-2, it was expected that the midfield would prove to be a key part of this game when the lineups were released.

And that quickly would prove to be the case.

But almost surprisingly, it wouldn’t be for the reasons expected, as while you’d look at both teams’ midfield set-ups and expect strong technical ability, a surprising feistiness would end up taking over that battle.

Yet, it was a battle befitting of the conditions in which the game was played.

With the Edmonton snow remaining persistent throughout the game, it left the field slick, meaning that passes on both sides had an extra zip on it. As a result, it made it hard to play through the middle, especially without taking a touch or two, so sensing that, both teams stepped it up physically in the middle of the park.

And when taking a look at the map of all of the duels and tackles contested by either midfield on the night, you can see what sort of game that led to. It was rough, it was physical, and it certainly wasn’t for the faint of heart.

Yet both teams relished that challenge.

Even though it might not have been the way that either side drew it up, both coaches would share immense pride in how their sides battled in the middle of the park in this game, just further demonstrating how big of a role it played in the eventual result.

“I think it was a great midfield battle,” Nash said. “Both teams played well, both teams fought, and you have to do that in conditions like today’s.”

CanPL.Ca Player of the Match:

In his first start with York United, De Rosario started slow, but woke up as the game went along, which paved the way for him to open his CPL account in style. Finishing with 4 shots, he could’ve easily had a goal or two more based on some of the positions that he found himself in, which is always encouraging to see from a young forward.