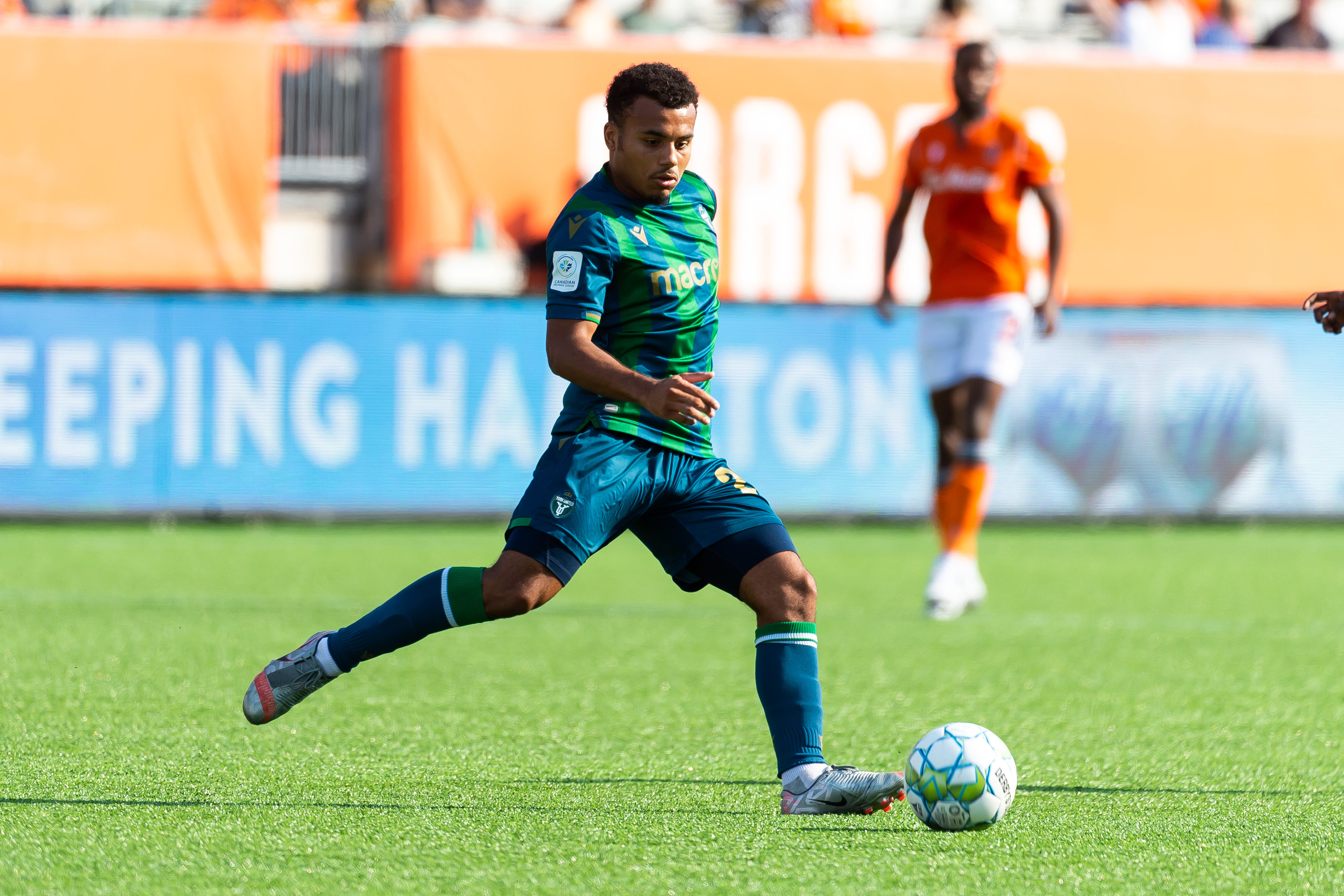 A pair of goals around the hour mark of Saturday’s 905 Derby saw York United beat Forge FC 2-0 in the latest battle between the two sides.

After being brought down in the penalty area, Diyaeddine Abzi won a penalty for York in the 17th minute, winning a penalty and setting up the best scoring chance of the match to that point. Alvaro Rivero’s shot was saved by Triston Henry, however, and the match remained scoreless.

Joshua Navarro hit the post at the other end of the pitch moments later, and Paolo Sabak struck the woodwork in the second half as well, but that’s as close as Forge would come to scoring in this match.

Max Ferrari gave York the lead with a mixture of a cross and a shot in the 60th minute — firing the ball across the box, hitting the inside of the far post and past Henry for the opening goal.

Rivero would get redemption for his earlier miss in the 62nd minute, tapping home a loose ball in front of the goal to double his team’s lead. Making an overlapping run down the right wing, Isaiah Johnston received a pass from Max Ferrari and played it across the penalty area. Henry got a touch, but the ball fell to Rivero, who made no mistake from a couple of yards out.

The result sees York climb back into fifth place, after HFX Wanderers had briefly jumped over them earlier in the day. They’re now even with fourth-placed Valour FC on 22 points, as the push for the playoffs begins to heat up. Forge remain in third, six points above York and Valour, and three back of second-placed Cavalry.

One of the standout players for York this season, Max Ferrari continued his strong campaign on Saturday night, scoring the winning goal, and orchestrating a second moments later. The 21-year-old has made huge strides this season, and it seems as though he’s one of the best players on the pitch every single week.

That was no different against Forge FC, as Ferrari was a key player for The Nine Stripes offensively, and also did his job defensively.

He scored the first goal of the match in the 60th minute, with a shot and cross hybrid effort, whipped across the box after beating a pair of defenders. The ball struck the inside of the post and came back over the line to make it 1-0 — a goal that Ferrari admitted he didn’t necessarily attempt, but was happy to take credit for.

“Noah just gave me the ball at the edge of the box, and I took a big touch and kind of just hit it,” he said after the match. “Luckily it went in off the post, and I’ll claim it as a shot.”

On the other side of the ball, he made two tackles and interception. He tied for the team lead in shots on target and key passes, helping York pick up a huge three points.

“Max was great, he was very dynamic,” said York head coach Jimmy Brennan after the match. “Every time he was on the ball he was making something happen. He was very creative today at times and it was good to see him rewarded with his goal today.”

Forge FC midfielder Elimane Cissé is absolutely vital to the way his team operates, even if it doesn’t always show on the scoresheet.

Cissé never stops running, which is incredibly useful to Forge’s ability to press the opposition when they’re looking to win the ball back. The Senegalese midfielder puts pressure on his opponents by running at them, forcing turnovers and mistakes, or allowing himself a chance to put in a tackle and win back the ball.

Alongside Kyle Bekker and Alexander Achinioti-Jönsson in midfield, Forge have arguably the best midfield trio in the CPL when they’re all healthy and firing on all cylinders. They have the ability to defend deep or press high on defence, and spark counter-attacks and attacking movements going forward. Cissé does all of the above, and is like an engine in The Hammers’ midfield.

“Cissé is a catalyst of a lot of things that happen on the field,” said Forge head coach Bobby Smyrniotis after the match. “He does a lot of the ‘silent work’, as we say in the midfield, and he’s an engine that keeps us moving.”

“Cissé is someone who runs a lot, he’s more of a box-to-box player,” said teammate Paolo Sabak after the match. “I think for the attacking players he’s an important player, if we try something in front we know we have someone in midfield who can take the ball if we lose it. Cissé is a very important player for us.”

York close out game well, move one step closer to a playoff spot

In recent weeks, York United have had leads going into the latter stages of their matches, but ended up dropping points with a late collapse, but on Saturday were able to hold on to preserve the win, and a clean sheet.

Against Atletico Ottawa on September 1, an 82nd Malcolm Shaw goal lost them two points, settling for a 2-2 draw instead of a win, and on September 6 they were a part of the most bizarre ending to a match in CPL history.

Up 2-0 going into the final few moments of a match against HFX Wanderers, York gave up two penalties. Joao Morelli scored both, and it looked as though the match would end 2-2. Alvaro Rivero gave The Nine Stripes the lead again in the 90th minute, but a 92nd minute own goal from Diyaeddine  Abzi saw the match end 3-3.

Great entertainment for a neutral viewer, but frustrating for a York side looking to hold off HFX Wanderers and move three points closer to a playoff spot.

It was a different story on Saturday, and York’s defence — especially goalkeeper Nathan Ingham — stepped up to turn away every chance that came Forge’s way in the final 30 minutes or so after their goals. Forge came close in the 90th minute, as Woobens Pacius and Mo Babouli fired shots at Ingham from the edge of the six-yard box, but Ingham made himself big to turn the chances away.

“I think the most important thing for us, where we struggled over the last couple of games, we had the lead but we conceded in the last ten or five minutes of the match,” said Brennan. “Today it was important to see this match out, and also have a clean sheet as well.”

“We battled for the full 90,” said Ferrari. “Especially after that result we had last week, as a group we were very disappointed and to come here on the road against a tough team and a good crowd, to get the three points is massive.”

With the win, York are now tied on 22 points with fourth-placed Valour FC. The playoff race is getting tight — HFX are also just one point behind — so every single point is crucial at the moment. Valour have slipped down the table a bit after starting the season so well in the season-opening bubble, allowing York and the Wanderers in particular an opportunity to catch up.

Valour have now been caught, so the next few matches will be critical to decide how the end-of-season table shapes up, with the top four teams making the playoffs.

“That’s what we’ve been chasing, we knew we needed three points,” added Ferrari. “We saw that we were on 19, and could get us level with Valour on 22 with a win today. We thought we were unlucky with our past couple of results, and to get a win after five games without one is huge for us.”

The Nine Stripes midfielder scored the winning goal and played a big part in York’s second, helping his side win the 905 Derby.

Forge FC turn their attention to the Canadian Championship, as they open their tournament with a quarterfinal match against Valour FC on Wednesday, September 15 (7:30 pm ET/ 6:30 pm CT) at Tim Hortons Field. York United head back home to York Lions Stadium for a league match against Atletico Ottawa on Tuesday, September 14 (7 pm ET). Watch all matches live on OneSoccer.