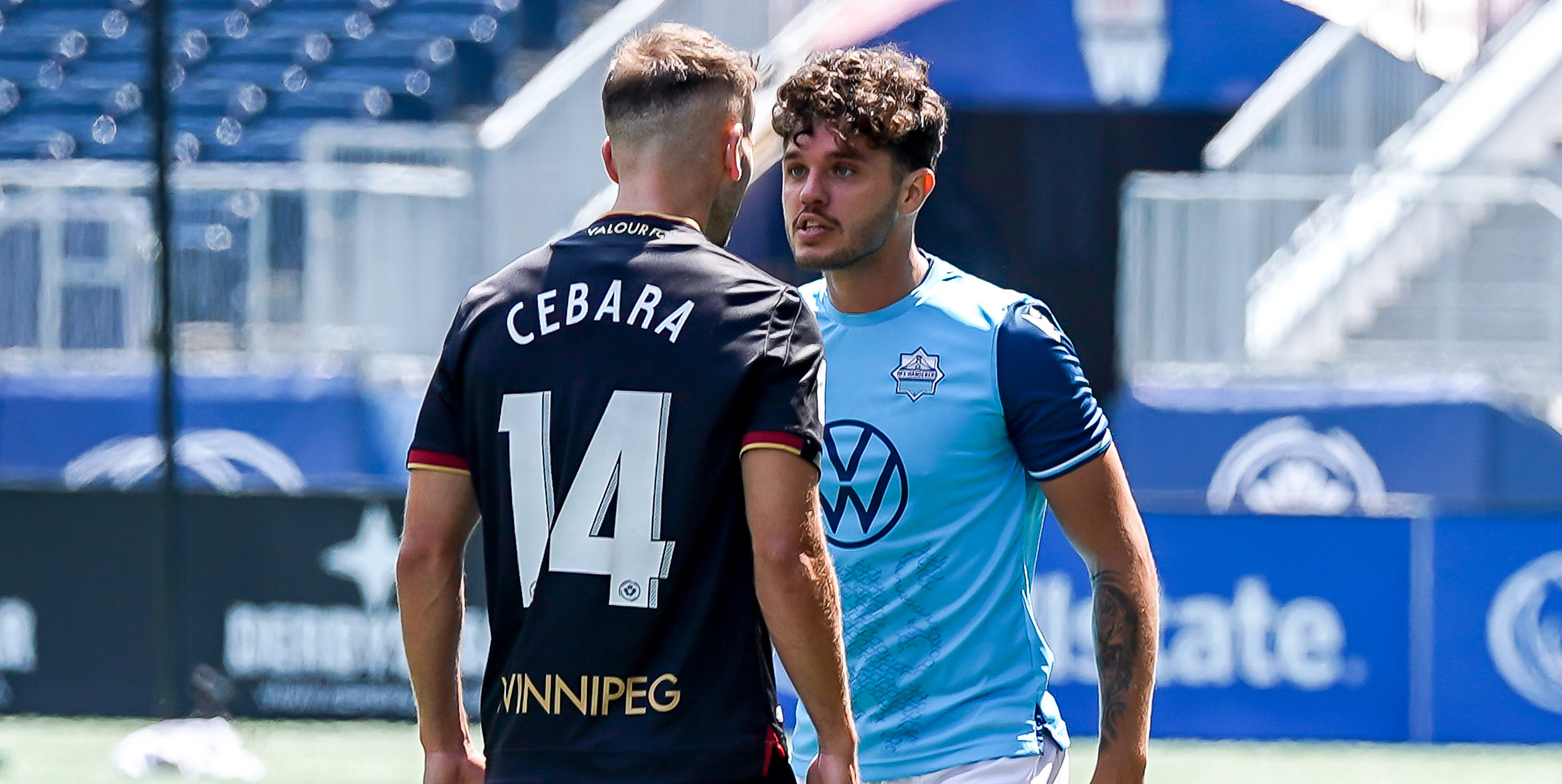 HFX Wanderers will leave the Winnipeg bubble with a smile on their faces, having topped league leaders Valour FC 1-0 in both sides’ final contest of The Kickoff. The Wanderers threw a stunning 20 shots at the Valour goal, 12 of them on target, and goalkeeper Jonathan Sirois did all he could to keep them out, but in the end HFX needed just one — an excellent volley from the top of the box by Pierre Lamothe — to get by Valour for their second win of the year.

Before this game, Wanderers assistant coach Mesut Mert mentioned that he’d like to see his team play a little more decisively going forward, particularly in the attacking third. They were certainly better in that department on Saturday, far less hesitant to shoot from decent positions. They ended up throwing 20 shots at the Valour goal, and although they weren’t necessarily all high-danger chances, the Wanderers benefited from a return to simplicity.

“We wanted to make sure that we pushed the ball forward,” Mert said postgame. “That was something that we really wanted to execute today, and we created a lot of chances.”

He added: “Given how we’ve played, how we’ve ended up and where we are now, this game is already a turning point for us. We can take back a lot of lessons from this game, things like pushing the ball forward, continuing to play aggressively on the offence. We did a little bit of a better job defensively as well, we were very professional in how we defended and chose our moments when to push forward.”

Alessandro Riggi was excellent for HFX in the attack, making his first start of the season after some struggles with injury, as was Omar Kreim on the opposite wing. The Wanderers played the vast majority of their attacking game down the flanks — Morey Doner at right-back was a huge part of the team’s success in the wide areas as well with his pace and knack for an overlapping run. That energy for HFX brought them far closer to looking like the side that made the CPL Final in 2020, and if they can play like that more consistently they should be able to climb up the league table.

Certainly, three points against the top side in the league so far is a huge result for HFX, and it could go a long way toward galvanizing the side as they head back home to Nova Scotia.

This game probably wouldn’t have been just 1-0 for HFX if it weren’t for the outstanding play of Valour’s goalkeeeper. Jonathan Sirois set a CPL record with his 11 saves on Saturday, several of them extremely impressive stops either diving to push a shot aside or reacting quickly to point-blank opportunities. Though he conceded a goal for the first time this year, this may have been Sirois’ best game yet in a Valour shirt.

His distribution was exceptional as well in this game, with 22 of Sirois’ 23 attempted passes finding their target as Valour played out of the back quite well. Asked what he liked about the effort from his goalkeeper on Saturday, Rob Gale replied: “Everything.”

Gale added: “He’s a top-class goalie. He’s been the best goalkeeper in the league. He had a lot of long-range sighters today, a few highlight reel ones… He’s been fantastic. A great kid, great character. Top man.”

After over 500 minutes of clean sheet football from the 20-year-old, Sirois himself was a little disappointed postgame, although he admitted he hadn’t really been able to see Pierre Lamothe’s shot for the goal he conceded. Nonetheless, quite a remarkable performance from the young shot-stopper.

Rob Gale wasn’t particularly displeased with what he saw from his side on Saturday, given that Valour managed to come out with 60% possession and a significant advantage in duels won. Still, they weren’t quite able to get in behind the Wanderers’ defence as much as they might’ve liked — or as much as they have in other recent games. With Raphael Ohin and Daryl Fordyce dropping quite deep into midfield, Valour were very good at establishing control of the ball and dictating tempo, but they perhaps didn’t move it forward quickly enough.

Valour did seem to improve as the game went on, particularly with a few tactical shifts that seemed to help them exert even more control on the ball; when Masta Kacher and Jared Ulloa entered the match at halftime they seemed to play forward a little more directly, which did cause problems for the Wanderers, but the Halifax side continued to defend in very well-organized and narrow banks of four that made it very difficult for Valour to play through balls between the lines.

By the end of the match, as Gale pointed out, Valour had a lot of firepower on the pitch — at least six or seven attacking players — but nonetheless, they weren’t exactly able to find their rhythm in the attacking third.

“We changed the shape three times in the second half to try and find different ways, different areas to exploit,” said Gale. “I thought the first half we were fully in control of the game to be honest, I don’t remember them getting in behind us at all in the first half an hour, but it just changed after the water break.

“We lacked a bit of the penetration that we needed, especially when we’re getting the ball from side to side and in wide areas into the fullback channels, but we changed shape, we changed personnel. We’ve thrown seven attackers at them and it just wasn’t to be our day. They’ll get some transitions and a few pot shots, but to be fair it’s difficult to break down a team when most of their players are 35 yards from goal if they get up in a game.”

The Montreal native was a force for HFX in his first start of the 2021 season, facilitating much of the side’s attacking play in the first half especially. He made two key passes and had three shots on target of his own, plus he set up Lamothe with a clever ball to the top of the box for the Wanderers’ only goal. The huge grin on Riggi’s face postmatch was certainly well-earned.

For the first time this season, Valour will now head out on the road. Their next match will be Saturday, July 31, when they’ll travel to Clarke Stadium to play FC Edmonton (9 pm ET/7 pm MT). The Wanderers will finally return home to Halifax, where they’ll take on Atlético Ottawa on Monday, August 2 (2 pm ET/3 pm AT). Watch all matches live on OneSoccer.