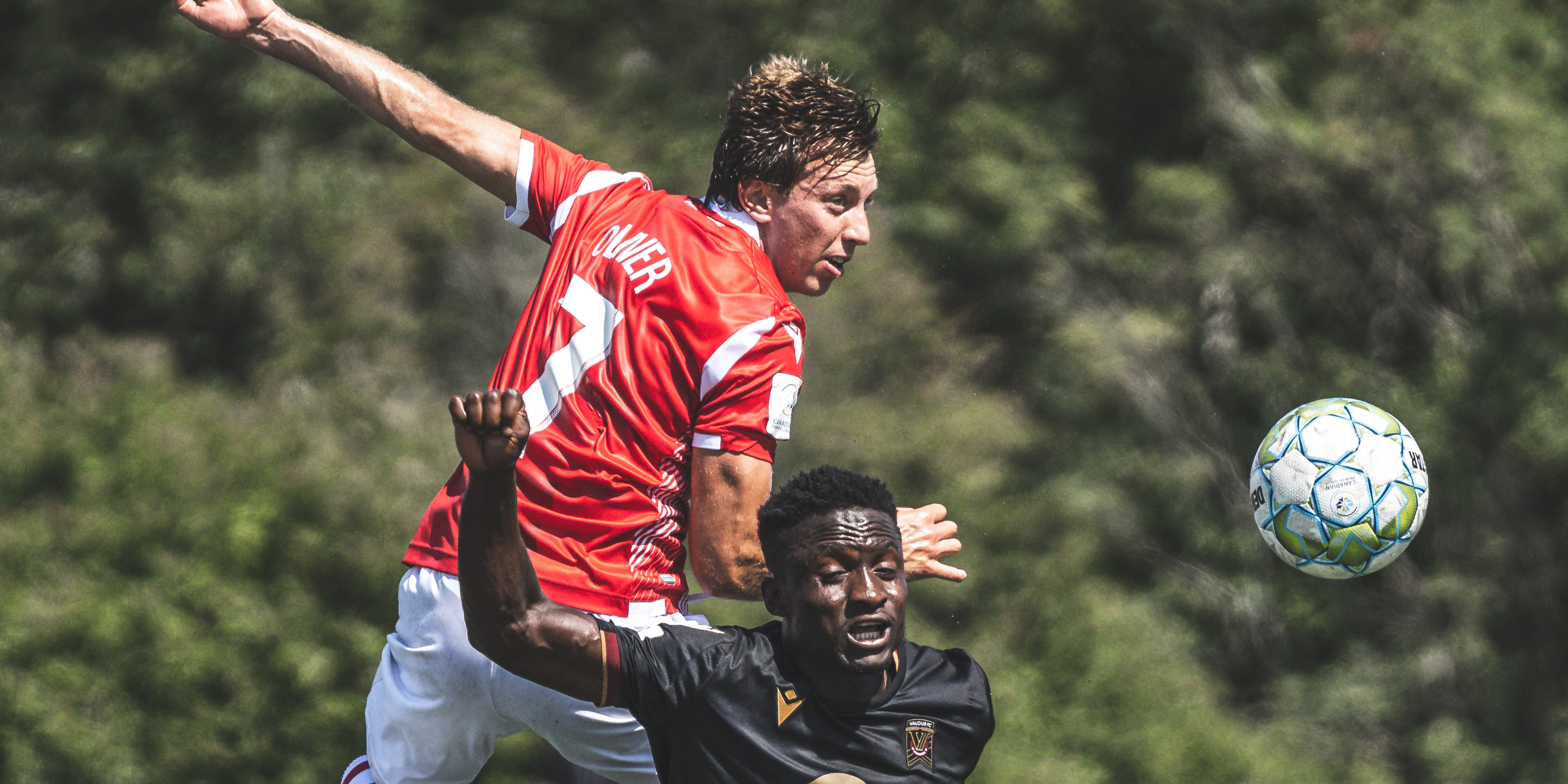 It was a moment that, briefly, made the whole CPL hold its breath.

In the 12th minute of Cavalry FC’s final first-round match at The Island Games, winger Oliver Minatel went down with an injury following a challenge for a 50/50 ball by York9 FC’s Roger Thompson, and pretty much everyone knew it was bad.

Minatel was carted straight to hospital in Charlottetown, where he underwent surgery almost immediately. The diagnosis? A fractured tibia and fibula in his right leg.

His Cavalry teammates, after standing breathlessly on the field for about 10 minutes before Minatel was finally stretchered away, immediately steeled their resolve after seeing a friend and fellow soldier go down in such heartbreaking fashion.

“Whenever anything happens like that it’s just natural to say we’re doing this for him,” captain Nik Ledgerwood said after the York9 game.

The match was one they couldn’t afford to lose, with massive top-four implications, and the Cavs stood tall. Marcus Haber, who entered as a substitute to replace Minatel, was the hero, scoring what would ultimately be the winner midway through the second half. After pouncing on a loose rebound to put Cavalry up 1-0, Haber made a beeline for the bench and kissed Minatel’s jersey, which the team had kept with them after the winger went to hospital.

Although he obviously didn’t see it happen live, Minatel was thrilled later that evening to see the highlights of the game, and to receive a deluge of supportive messages from teammates and fans.

“I was very humbled by everyone,” Minatel said. “Marcus, I saw the video of when he scored and he had my jersey, and then later on the picture that they took, it just helps me to keep going.”

He added: “Even later in the hotel, the guys were looking after me, because for the first month really I couldn’t do anything on my own. It feels good to see how our team is, the relationships that we have in those two years that we’ve been together … They were great with me since the first day, even in the hospital from the first day when Tommy (Wheeldon Jr.) spoke to me for the first time. (Club management) made it clear that the club, our ownership, they have a lot of pride and they wouldn’t leave a wounded soldier behind.”

The Brazilian winger also gave credit to the medical professionals in Charlottetown who looked after him, praising the care he received at a very stressful time.

“The surgery was great, I’m very thankful for Dr. Scott Wotherspoon and all of his team,” Minatel said. “Once I got to the hospital everything was really good, really quick. I got surgery right away, and after surgery the first couple of days I was able to start already some mobility, to help once I was able to do more.”

From there, the true recovery process began for Minatel. For a serious injury like his, the healing and rehabilitation takes a long time — certainly several months. After Cavalry’s campaign at The Island Games concluded, Minatel returned to his native Brazil to begin his fully program of physiotherapy and recovery.

Minatel revealed to CanPL.ca that he’s been working six to seven hours a day, six days a week, at a local facility. The program involves morning pool sessions, mobility work, and cardio training, as well as proper regeneration exercises and nutrition. According to him, it’s going as well as he could’ve possibly hoped.

“I’ve been improving really well, it’s been great,” he said. “I’m ahead of the schedule of what we thought.”

We are pleased to let everyone know that Oliver is now on the road to recovery following an injury sustained yesterday.

With plenty of work to do in the coming months before the 2021 CPL season kicks off, Minatel is glad to have a return to the pitch as his light at the end of the tunnel. From conversations with Cavalry management, he feels good about his future with the club and his eventual return to Calgary.

Until then, though, he wants fans to know he’s on the right track. And he’s grateful for the outpouring of support he’s received.

“I never imagined I would’ve received so many comforting messages, and even from fans from other clubs,” Minatel said. “I think that just shows how the league itself is a big community and a great environment to be involved in. I’d like to thank everyone once again.”