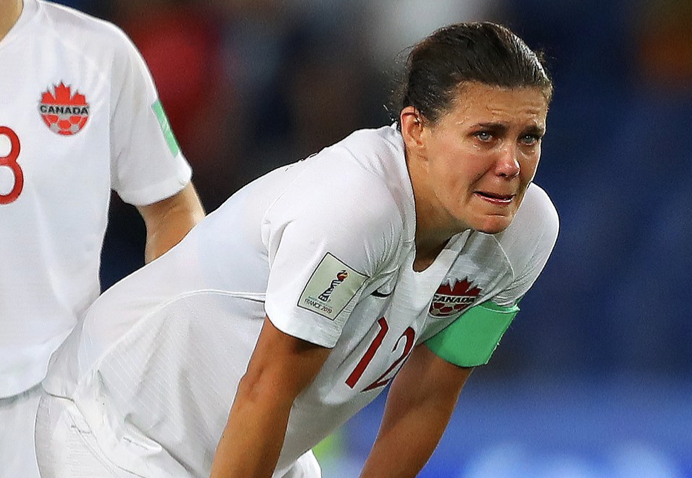 If you followed the Canadian women’s team closely this past year, you would have felt a spectrum of emotions, anticipation and possibly skepticism about the future of the group heading into 2020.

Indeed, 2019 was a year of highs, lows and learnings for the women’s side and their fans.

The Canadian team went from experiencing an early exit at the FIFA Women’s World Cup in France, to seeing Christine Sinclair come just two goals shy of becoming the all-time goal scorer in international soccer, for men or women.

The Canadian program also made history by capping Olivia Smith, a 15-year-old from North York, Ont., making her the youngest player to wear the badge at the senior level.

2019 also saw the women’s side play in six different countries and accumulate a record of 8-4-3. They were undefeated heading into the World Cup, with five wins in eight games, with only one goal against, and scoring eight. Sinclair bagged four of those goals and entered the World Cup with high hopes of breaking the all-time scoring record. We didn’t get to see that on the world stage, but will be on the edge of our seats while observing her 2020 international campaign. The year ended with the team scoring 15 goals from seven different goal scorers, conceding 12 from 13 different opponents.

Looking at the results and performances, the year can be broken down into three distinct periods. The first period, the first five months of the year, had the sole purpose of the team getting ready for the vigorous demands of the World Cup. Canada was preparing to face Cameroon, New Zealand and the Netherlands, who all have different playing styles, and key differences in player profiles and abilities. In this first period, Canada only conceded one goal and was undefeated.

The second period was at the World Cup in France. We witnessed Canada’s performances and were able to see that only marginal differences divided them from the rest. The reality is, one goal separated Canada from the World Cup’s eventual second- and third-placed teams, Netherlands and Sweden. They were statistically dominant in a number of categories including team passing accuracy, penalty area-entries and even physical metres covered. However, tournament statistics also showed that Canada converted only 21 per cent of their final third entries into shots, which is the major area of improvement needed for this team. The team scored four goals and conceded three by the knockout stage in which they eventually exited the tournament.

The third period of the year, from October to November, took a turn for the worse when they conceded eight goals over two games against Japan and Brazil. From an outside perspective, it looked as if the team had lost its on-field chemistry and perhaps were feeling the weight of its early World Cup exit. Regardless of why this happened, there were some backwards steps, salvaged by their final game of the year, a 3-0 win over New Zealand.

This raises the question: Is this by design or chance? If we considered the back-to-back bronze medal performances in 2012 and 2016 as an indication, it would be by design. In 2015, after a World Cup exit in the quarter-finals home soil, John Herdman said that Canada was always meant to peak in Rio, not necessarily at the World Cup. The learnings and deep analysis from the 2015 World Cup provided vital information that eventually saw them reach another podium in Rio in 2016. If we use history as a guide, Canada will be expected to podium in Tokyo next summer.

On an individual level, Canada’s top talent have continued to impress at the professional and collegiate ranks. Jordyn Huitema, for example, scored her first professional goal with PSG at 18 years of age back in August. She also scored in her debut for the club in the UEFA Women’s Champion’s League. She is still only one of three North American female national team athletes to play professionally after forgoing her academic path. The other two were Lindsay Horan and Mal Pugh from the U.S. team’s 2019 World Cup Champion roster.

Ashley Lawrence, who plays for PSG, also had a notable year appearing on the FIFA’s Five Young Stars to watch list for the World Cup, and was voted Canadian Women’s Player of the Year. Stephanie Labbé won the NWSL regular season and Championship with the dominant North Carolina Courage, putting in key performances and playing an important leadership role. Jessie Fleming has been shortlisted for the Hermann Trophy, the most coveted individual honour in NCAA Division I soccer, while Kadeisha Buchanan won another UEFA Women’s Champions League Trophy with French club Lyon.

Other notable news from the year included the induction of Canada’s 2012 bronze medal winning team into the Canadian Olympic Committee’s Hall of Fame. They joined an accomplished roster of exceptionally talented recipients including the 2010 gold medal winning women’s hockey team, Simon Whitfield, and Alexandre Despatie and many more legends.

Looking ahead to 2020, Canada will be working to put everything into booking their spot at the Tokyo Olympics. The Concacaf qualifying tournament will take place in the U.S. from Jan. 22 to Feb. 9, and will send the region’s top two countries to Japan.

Canada’s group, which consists of Mexico, Jamaica and St. Kitts & Nevis, will be highly competitive, seeing as women’s soccer in our region is on the rise. Jamaica, for example, is coming off of its first ever World Cup appearance. They will be a team fighting for pride, and for the opportunity to repeat history and qualify for another major tournament. Mexico, a young side, has been rebuilding its programs from the youth levels up and will be primed to qualify for their second ever Olympic Games.

At the Olympic qualifiers, Canada’s 18-player roster will look to solidify their spot to Tokyo, with five less roster spots than the World Cup allowed. There will surely be many familiar faces who make the final squad such as Desiree Scott, Jessie Fleming and Kadeisha Buchanan, but there could be some new faces as well, like Olivia Smith, who earned her first cap in November.

Coach, Kenneth Heiner-Møller, will have some tough decisions in making his final Olympic roster decisions. The goal will be to find the right mix of players with experience and youth, but also readiness to perform. Looking back at his World Cup roster, seven players did not see the pitch, and he utilized only 16 players over the course of the team’s four appearances. No matter who Heiner-Møller choses, he will be looking to pick the players who will give Canada a much-needed edge in their pursuit for podium again.

In March, Canada will be participating the Tournoi de France. Canada will face France, the Netherlands and Brazil at the friendly tournament, which will take place during the FIFA international window. These three Tier-1 opponents will give Canada a much-needed game experience that will provide critical information in their preparations for the Olympics, should they qualify.