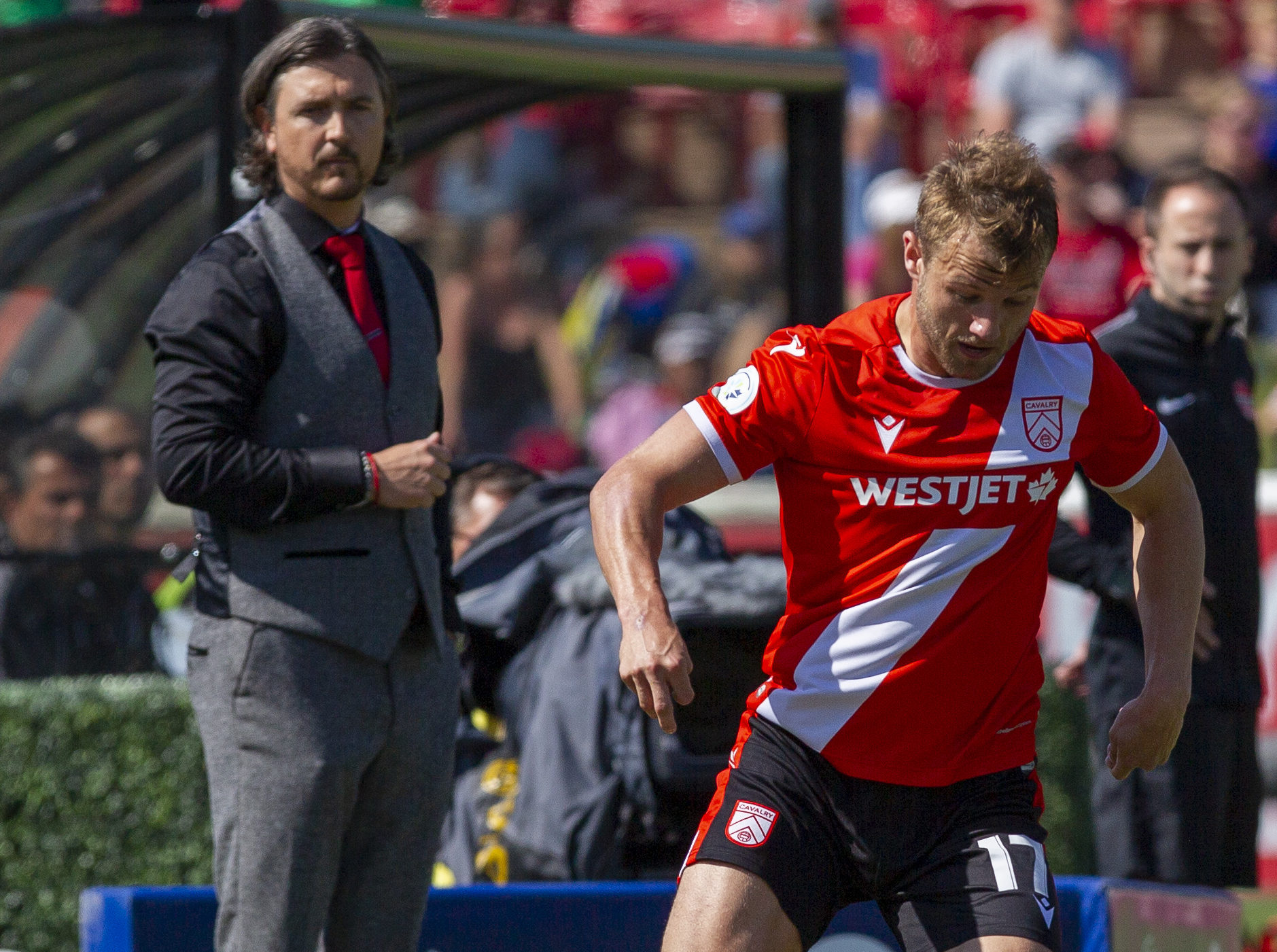 It’s not over yet for Cavalry FC, is it?

Sure, the Calgary-based outfit’s perfect 7-0-0 record now features a blemish in the “Losses” column.

And, yes, the Cavs must now wait until at least Wednesday night against York9 FC to wrap up their Spring title charge, booking a spot in the 2019 CPL Championship.

But, for Cavalry head coach Tommy Wheeldon Jr., a 1-0 loss to Forge FC is no cause for any qualms of concerns.

“One game doesn’t define us,” Wheeldon Jr. said after the match. “But … about 10 starts to see who you are.”

“We’ve seen that we’ve come in close, and I actually thought our performance was good,” he continued. “I’m awful proud of these lads. They’re a resilient group, and they’ve shown that over the course of the season so far. They’ve got great bounce-back-ability.”

Cavalry captain Mason Trafford offered a similar sentiment:  ”We’re all feeling confident that we’ll bounce back with a couple wins in the next two games.”

Alright then. Back to the drawing board here for supporters and onlookers alike, who can look to the Spring table, sort through the many permutations, and generally come back to the same conclusion – the opening stanza is still very much Cavalry’s for the taking.

It’ll take more than the single point the Cavs needed before kick-off on Saturday, sure, but the odds still remain in their favour.

What this first Cavalry loss did reveal, however, is that no team in this league is infallible, nor invincible.

“We’re in this league because we want to play against the best,” Wheeldon Jr. offered. “The salary cap dictates that everyone’s on par, and we’ve just gotten off the traps a lot better than others, but Forge were right there with us. We’ve had four very good games against them – and we’re probably sick and tired of each other by now – but that’s just the nature of it. I’m sure, near the end, we’ll be there, scrapping away and taking points off of each other again.”

“That’s what this league is made for,” he continued. “There’s a lot of good Canadian players out there – now we can play in meaningful games. That’s the purpose of this league, so the closer we are, the better we are.”

Cavalry now switches focus to a pair of away games against York9 and Pacific FC, the last of which lands on Canada Day, July 1, a date that could wrap up the entire Spring season in one final celebratory fashion.

But the party won’t be at home. Saturday’s tilt against Forge represented the final chance for Cavalry to wrap up the Spring title at Spruce Meadows, after all.

No bother for Wheeldon Jr.’s side, though – all part of the job.

“Of course, I mean, you want to do it in front of your fans, but we’ve said it time and time again, we don’t feel like this is the end of anything; it’s the start of something special,” Wheeldon Jr. said, when asked if he regretted the missed chance to celebrate a major milestone in front of their fans.

“We’re in here for the long haul. We want to be the club that’s there or thereabouts, that everybody’s talking about, because we’re competing for Championships. I’m sure we’ll do that again.”