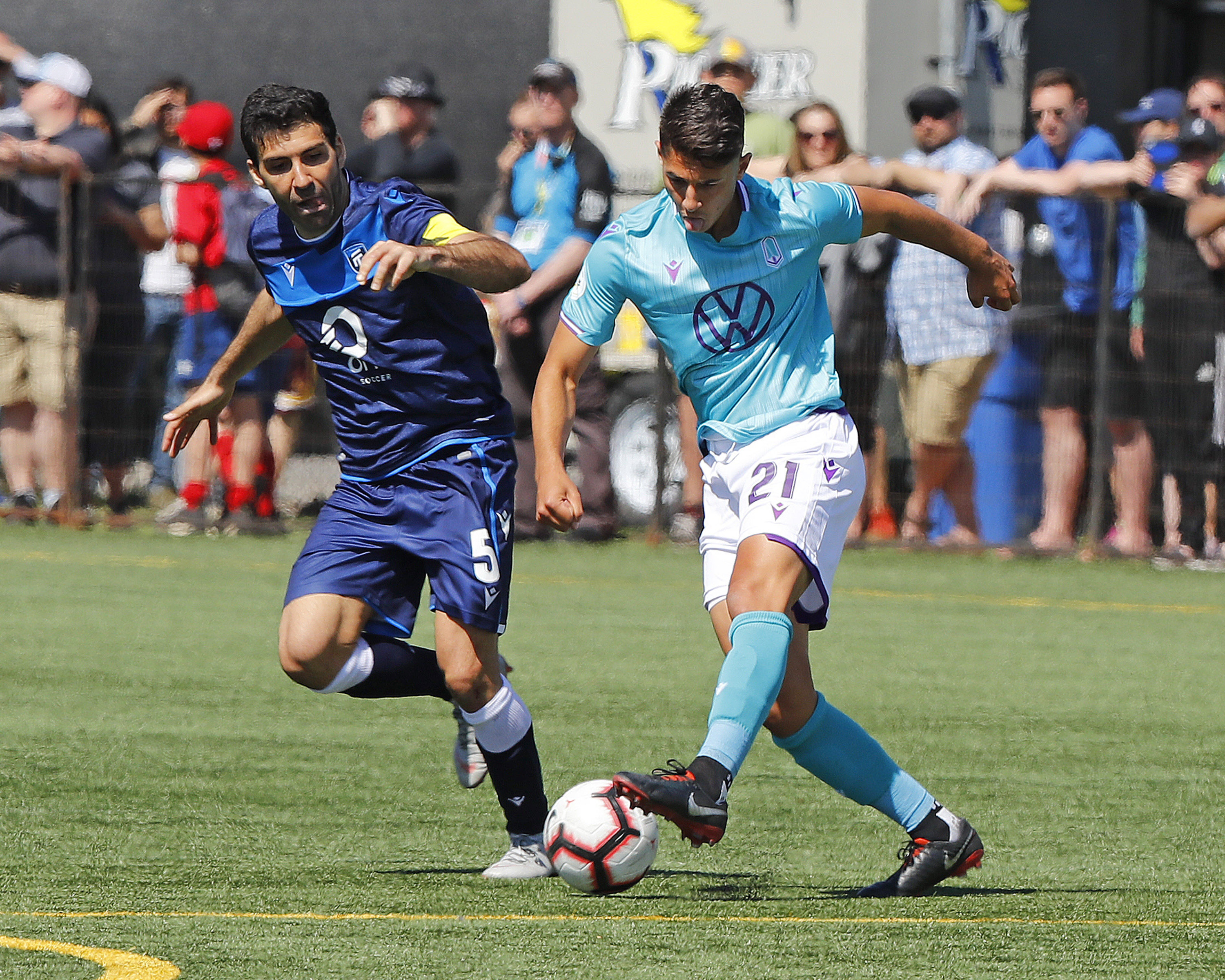 There are parallels between the ancient Bulgarian city and Victoria, B.C, if one wishes to look for them. Like Victoria, Plovdiv is used to being overshadowed by its larger, more cosmopolitan neighbour, Sofia. Both cities are surrounded by hills – Plovdiv, by the Hill of the Youth, the Hill of the Liberators, and the Hill of Danov; Victoria, by PKOLS (Mount Douglas), Mount Tolmie, and Mount Finlayson.

But the time zones are the main thing to consider here. Especially when recruiting players across continents.

James Merriman was a newly-minted assistant coach with Pacific FC when Alessandro Hojabrpour’s name crossed his mind. It was Merriman’s job to build a database of British Columbia-bred talent. He knew most of them from his time as a residency coach with the Vancouver Whitecaps – it was in no small part why Pacific co-owners Josh Simpson and Rob Friend hired him in the first place.

“(Alessandro) was one of the first names I said to Rob that we should have a conversation with and see what his plans are, because he’s perfect for what we’re trying to build,” Merriman told CanPL.ca.

Simpson and Friend created a vision of Pacific FC filled with young, local players with Canadian national team experience. The Nanaimo-born Merriman coached a 14-year-old Hojabrpour during his first year with the Whitecaps’ Residency program. Hojabrpour, Merriman thought, was the prototype that Pacific was after: born in Burnaby, he had played for Canada at the U-15 and U-17 levels. In late September, early October of 2018, Merriman reached out to his former player.

“For the first couple texts back and forth, I was still in Bulgaria,” Hojabrpour recalled.

“It was just premature talks at that point. And then as December rolled around, talks got serious. I got a couple texts from him, saying, ‘What do you think? Are you on board?’”

“When I knew he’d been in Bulgaria, I wasn’t exactly sure what was going on, if he was staying there (or) coming back,” Merriman added.

In the fall of 2018, the Canadian Premier League was still a mystery to many players. Rosters had yet to be filled. Pacific FC was barely months old as a franchise. But to Hojabrpour, who had spent the past year-and-a-half with Lokomotiv Plovdiv’s U-19 side, Merriman’s offer represented the chance to return home.

“Looking at the league, I don’t think anyone expected it to be what it is today. I think it’s leaps and bounds ahead of where it might have been,” Hojabrpour offered.

The opportunity to reunite with Merriman proved enticing, too.

“He’s always been great with me,” Hojabrpour said. “He always has the belief in every single one of us that we can take our games to the next level.”

But this season? Few could have predicted just how far the 19-year-old’s game would progress.

‘I’m going to fight for you to start’

Hojabrpour’s game is a different type to appreciate. It is not flashy in the way of, say, Forge FC’s Tristan Borges, or quick-footed PFC teammate Zach Verhoven. There are no highlight reel goals, nor end-to-end runs. It is measured. Reliable. Think Toronto FC’s Michael Bradley.

“He can be a box-to-box central midfielder or a No. 6 (holding midfielder), but he belongs in the middle of the field, because he has good spatial awareness,” Merriman stated. “He’s a thinker.”

“I rely a lot on my brain now to play the game,” Hojabrpour added. “I’m not the slowest person on the field, but my brain helps me to think quicker than most players, and that’s really useful in midfield.”

Oft-used is the “soccer as chess” analogy, but in Hojabrpour’s case, it rings true. His pass completion rate is consistently among Pacific’s best. All the more remarkable when considering the defensive midfielder is still just 19 years old.

But for all the progress he has since made, the Burnaby product’s season did not always look this way. His first action was not until Pacific’s fourth game, May 12 against FC Edmonton. His true breakout came later still, on the road at Valour FC’s IG Field.

It was June 20. Until then, Hojabrpour started just three of nine matches (two of those in the Canadian Championship). With Matthew Baldisimo a fixture in Pacific’s defensive midfield, and the recent arrival of Panama’s Alexander Gonzalez, minutes were few and far between.

Merriman found Hojabrpour in the lead-up to the match against Valour.

“He sat me down and said, ‘Are you ready? Because I’m going to fight for you to start this game,’” Hojabrpour recalled. “And I said, ‘If you give me the chance, I’ll take it.’”

Against Winnipeg, he completed 90 per cent of his 50 passes. Two matches later, against Cavalry FC, he bested that with a 91.7 per cent completion rate in the final match of the Spring season. Then he did it again, completing 96.8 per cent of his 63 passes in the Fall opener against the Cavs.

Since that June 20 trip to Valour’s IG Field, only two Pacific players – striker Terran Campbell and fullback Blake Smith – have played more minutes than Hojabrpour. With Pacific currently in third place in the CPL’s Fall standings, Hojabrpour has emerged as a key reason why coach Michael Silberbauer’s team has found its form.

“Michael and James have shown more belief than I could ever imagine in myself. They keep saying, ‘We know what type of player you are. As long as you’re healthy, you’ll be on the field,’” Hojabrpour said.

Merriman added: “He wants to get on the ball and dictate the rhythm and tempo of the game, and he enjoys it in the middle of the pitch. He’s always had that. He’s always had other things as well that we’re still trying to improve and develop that he’s aware of, but he’s got a great approach, and he always wants to learn and improve.”

That is the other side of Hojabrpour’s development. At 19, there is still plenty of room to grow. For the defensive midfielder’s part, he is taking the adjustments in stride.

“(Silberbauer) puts a big onus on me to do a lot of work, maybe off-the-ball, that I wasn’t used to before. We’re starting to defend very well in the last string of games, and it goes to show that if you do your work defensively, you will get chances,” Hojabrpour said.

If all goes well for the teenager, those chances will keep coming.

“He’s got everything that he needs to have a good future in the game,” Merriman said.