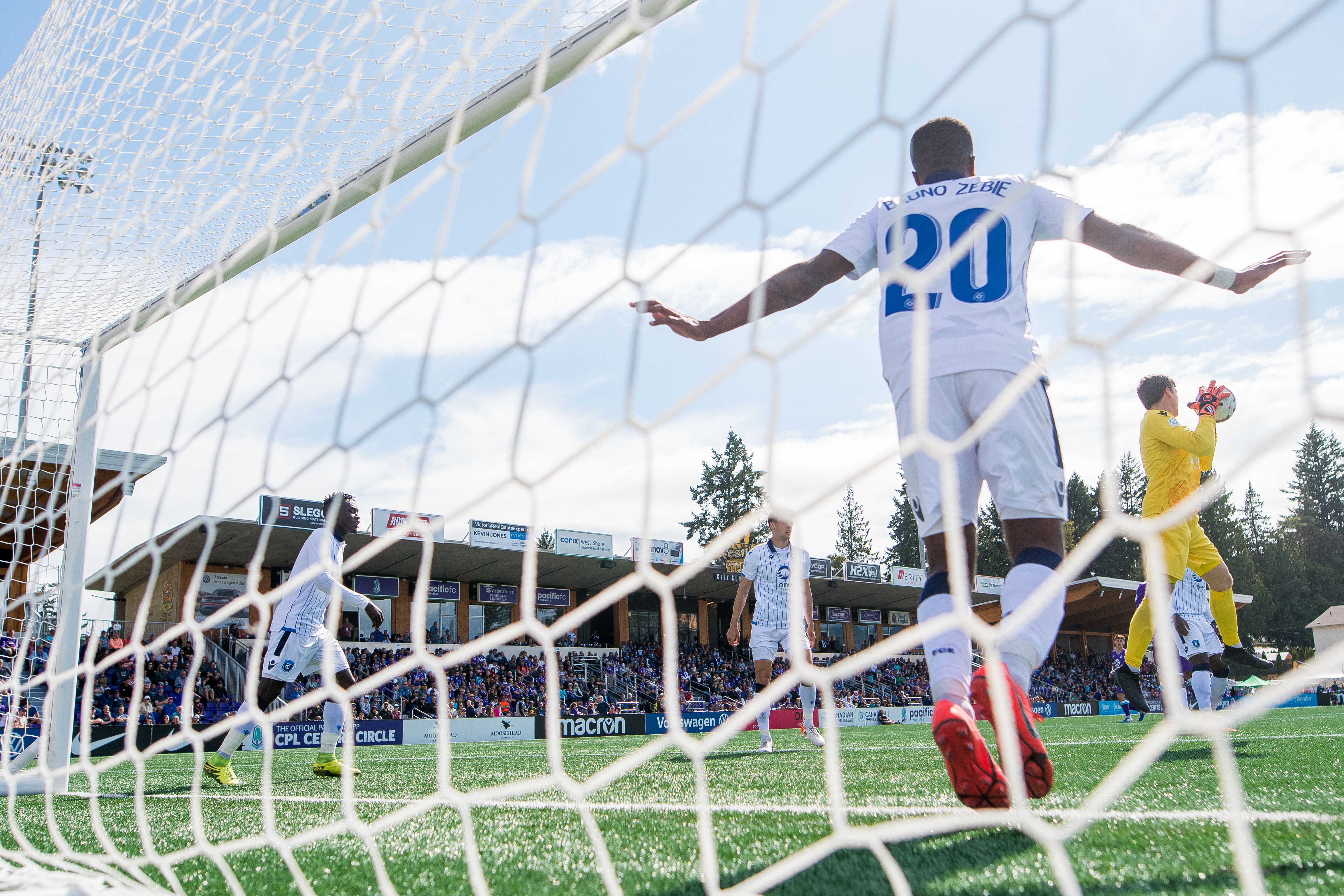 Through six winless Canadian Premier League games, it would be easy to lose count of the fruitless shots taken by FC Edmonton’s players. Open headers that missed the target. Shots put right into the keeper’s midsection when there was a whole net in front of the attacker. Shots screwed wide. Volleys blasted high.

FCE spent six games looking for the goal that didn’t come. That’s 555 minutes with nothing to show for it. So, Sunday’s 3-1 win at Pacific FC felt like an absolute avalanche.

Three weeks ago, FCE coach Jeff Paulus brought in an analyst to look at the team’s attacks. Paulus didn’t want to name the new helper, but the verdict was that, while the Eddies were creating chances, they were taking too many low-percentage shots and making crosses that had little chances of success. So, the team’s coaching staff set “four goals” for the players — four points of play that would encourage better shots from better situations.

“We wanted to change the way we play, change our shot selection,” Paulus said after the win. “The four goals helped guide us to where we should be shooting from … we looked at world football, where goals are scored from, and we saw that we weren’t making good shot selections.”

Paulus said that he didn’t want to specifically outline what the four goals are, as he didn’t want to give up too much of the tactical changes being made to the team. But we’ve seen FCE move to a more direct 4-4-2 style. Paulus said he noted that the changes were already taking effect in Wednesday’s 0-0 draw at York9, but that the Eddies missed the target or fired at the keeper when they got into those very good scoring areas. Three A-plus chances were created by the Eddies in that game — and you could argue that, for sure, at least one, and possibly more, of them should have been buried.

Back to Sunday’s game. The opening goal that broke the drought was a prime example of what the Eddies must do if they are to turn their fortunes around as we head towards the fall season. And what’s that? To use the team’s distinct advantage in size and strength over their opponents to their advantage. Pacific FC offers up not only a very youthful lineup, but one that doesn’t have the size and muscle of FCE.

A ball was played into the box to six-foot-plus striker Tomi Ameobi. And even though Pacific FC defender Emile Legault tried to bodycheck the forward, the bigger forward was able to turn and fire the ball into the goal. Legault simply didn’t have the mass to deal with the size disadvantage.

“I think you saw hunger today, in the guys,” Ameobi told OneSoccer after the game.

Ramon Soria provided the ball to Ameobi, and he also sent a clever ball forward for Oumar Diouck to one-touch into the net for goal No. 2. And, all of a sudden, a team that looked like it couldn’t hit the net was finishing with aplomb.

Bruno Zebie added a third in the second half, his first goal for FC Edmonton.

“Today, the difference was that we found the target from good areas,” said Paulus.

Now, the next step — scoring at home. FC Edmonton has scored all five of its CPL goals on the road. The only home goal was a late consolation in the Canadian Championship loss to York9.

But Paulus was the first to point out that Sunday’s game was far from perfect. He wasn’t pleased that Victor Blasco was allowed to time and space to unleash a wonder strike for Pacific’s lone goal. And he’s well aware that Blasco had two other attempts hit the woodwork.

“I’m very pleased about the result but I am very realistic. We gave up some chances that we shouldn’t be giving up. The goal was preventable.”