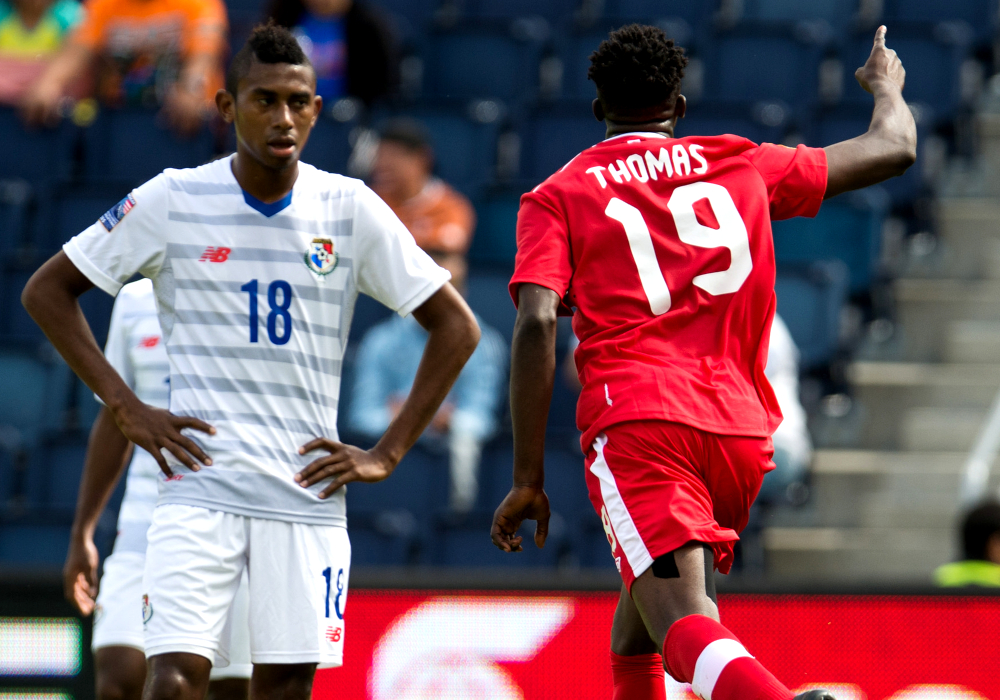 Canada’s under-23 men’s national team was trying to qualify for the Olympic soccer tournament.

In a game against Panama, defender Skylar Thomas rose to meet a cross, re-directing the ball off the post and, with a little loving backspin, into the goal.

The goal is as fresh in Thomas’s mind as if it happened yesterday.

Thomas hopes to wear the Canadian shirt again — and that was one of the 6-foot-5 defender’s motivations to join Valour FC ahead of the CPL’s inaugural 2019 season.

“That is the goal. I’ve been in the youth (national team) program, and I think I’ve done well with them,” Thomas added. “I’ve wanted to play for the national team since I was in my first youth team.”

Thomas spent the previous two seasons with the Charleston Battery of the USL. He appeared  in 47 games over those years. But, while he was getting regular playing time, he felt that he’d become a bit lost when it came to national team selection.

“There are just so many teams in USL,” he explained. “Half the teams we don’t even play. And there are so many players — so, yes, you can get lost.

“But that only played a part in my decision (to come to Valour FC). I definitely wanted to be part of building this league. I wanted the opportunity to come back to my home country and build the soccer culture in Canada.”

Valour FC coach Rob Gale first set his eyes on Thomas when the player was a freshly drafted prospect, playing for TFC II. Gale recalls a game at the Ontario Soccer Centre.

“And I thought to myself, ‘Wow, this is a player  with a lot of raw potential,’” Gale recalled.

Thomas, who was with Syracuse University before being drafted in first round of the 2015 MLS Superdraft by Toronto FC, was known for being aggressive and good in the air.

Gale and Thomas would later work together with the under-23 Canadian program.

“When I worked with him, I liked everything about him,” Gale said.

But things didn’t work out in Toronto — and, after two years, Thomas moved on.

“In reality, I was putting pressure on myself,” Thomas said. “I had come out of college (Syracuse) and was in a new environment, in my hometown. I am not so sure that I handled it as well as I could have, but I look at it that I am a better player today because I had that experience.”

In 2016, Gale was shocked to learn that Thomas was leaving Toronto FC. But he continued to follow the big Canadian defender as he moved to Charleston. And Gale said he continued to bring up Thomas’s name to a string of recent Canadian national team managers.

“He has the potential to step up and be part of the national team program,” said Gale.

Gale kept in touch with Thomas; that wasn’t unusual, as he is the kind of coach who likes to keep in touch with players, to make a congratulatory call if a player he used to mentor scores a goal or makes his club debut. He doesn’t forget birthdays, either.

Halfway through 2018, once Gale had been named the coach of Valour FC, he inquired what the centre back’s plans were for 2019. Eventually, that inquiry blossomed into contract discussions after the USL season.

Gale believes Thomas has a lot more to offer Valour FC than defensive steel. The Valour FC coach wants Thomas to get forward and be a threat in the opposition penalty area, just as he was on that day when he scored for Canada against Panama.  And Gale loves the fact that Thomas has a heck of a long throw.

Meanwhile, Thomas is looking forward to playing in a league where all the teams will get to know each other pretty well, unlike USL.

He’s already working out with some long-time friends in the Toronto area, and some have signed to other CPL teams. He says the verbal jousting has already begun.

“I’m already beginning to hate the other teams,” Thomas laughed.