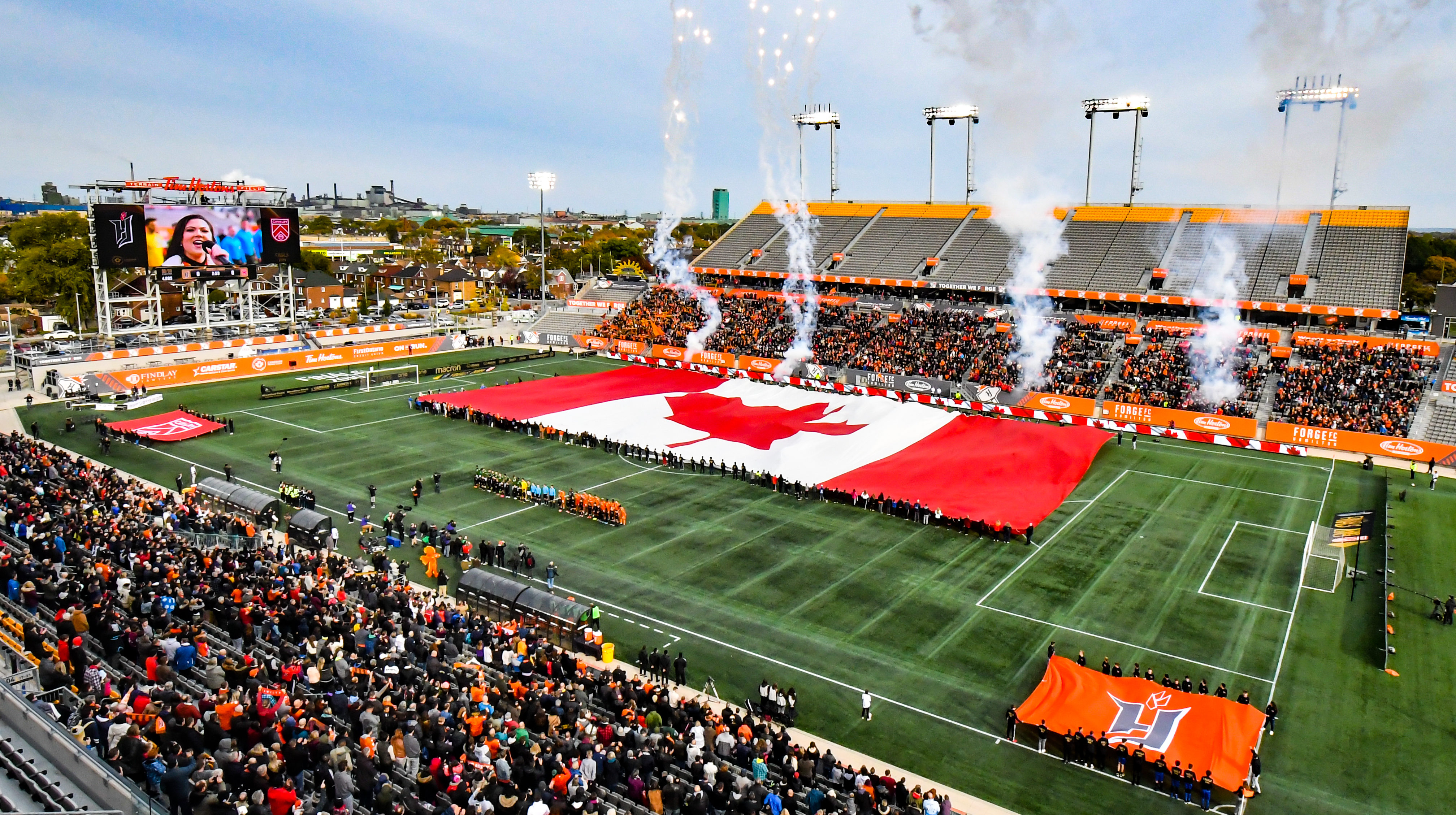 You know the cliché about the guy who’s the first one in the office and the last one to leave? That’s Clanachan. He’s routinely the first person in the CPL head offices every morning, and he’s usually the guy turning out the office lights at night as he heads home for the day.

Even though the Canadian Premier League campaign ended on Nov. 2 when Forge FC lifted the North Star Shield, Clanachan has kept a torrid pace this off-season, and has already been working on things for the 2020 CPL season.

Looking back at the 2019, there were a number of success stories for the CPL, but also room for improvement.

With that in mind, CanPL.ca sat down for a lengthy chat with the Clanachan to get his thoughts on the CPL’s inaugural season, and what changes might be coming down the line.

RELATED READING: A message to all CPL Fans: An open letter from the Commissioner

(This interview has been edited and condensed).

If you were to give a “state of union” address as it pertains to the CPL, what would it be?

I think we had a very good year; I’d say a great start in 2019. It was a season of many great firsts, and the list goes on and on and on. It goes from our first pre-season training camp where we did something unique in bringing all the clubs together in one place, to our inaugural match in Hamilton which was an amazing event, to Forge FC progressing to the Round of 16 in the Concacaf League, to the Canadian Championship where our teams did very well.

Honestly, I thought we were unlucky not to have put three teams through (in theCanadian Championship). I can remember at one point celebrating, maybe too early, in Montreal where York9 was playing extremely well against the Montreal Impact and should be up 2-0 but it was nil-nil. They should have won the game in York, so they nearly pulled that off. At the same time, Cavalry did well (in the second round) and were through to play Vancouver, and at the same time Halifax was up 2-0 late in the first half in Ottawa. I was thinking potentially we could have three teams go through (to the quarter-finals), which would have been unbelievable. But still, Cavalry advanced and made it to the semifinals, which was fantastic.

Then we had players who were called up to Canada Soccer’s Men’s National Team, something that people didn’t think could be done in our first season. Or the sponsors we brought on board, or that we partnered with a media company (Mediapro) that could get OneSoccer, a multi-platform channel up and running, with all our games distributed either on linear (CBC) or on its own OTT platform. There were a lot of successes.

It doesn’t mean we can’t be better. We can be better. There were moments where we knew we were just inches away from a really good showing. We built ourselves a good springboard, so we should be able to vault into 2020 and hit the ground running. We know that our sophomore year is the important year in sports. Anyone can have a phenomenal freshman year, but the sophomore year shows people that you’re professional and here for good. We started working on our sophomore year the day after the final in Calgary. It’s important that we impress and recognize that even our greatest fans and supporters have earned the right to be critical of us and they should be, because you only get better by pushing yourself to the next level.

What do you see as the two biggest priorities for the CPL ahead of the 2020 season?

We need to make sure that we put together a better schedule than we did in 2019. This past year was our first time, and we did a pretty good job with the schedule considering everything that was coming at us, from the expansion of the Canadian Championship and Forge’s run in the Concacaf League, which made the fixture list even more congested.

A second priority is the one question that hasn’t been answered for Canadian fans yet is where is the expansion coming from? Expansion is a big deal, it’s a priority. We have a ton of confidence in the league getting the schedule right, and we have a ton of confidence, knowing the quality of potential owners who are coming at us and where they’re coming from, I’m very confident. The problem we always have is where do we play. That’s proving to be a harder (obstacle) than anything. It’s not insurmountable, but it elongates the timeframe. For somebody like myself and our team, we have to show a level of patience and constraint. We should be careful how we go into it, so we do it right. We don’t want to fall into the trap of rushing things to the point where we blow it.

How important is it for potential owners to have a stadium plan in place before they are granted an expansion franchise?

When we’re talking about stadiums, we cannot play a professional game on a field with football lines. We have to have a facility that’s available, and it has to be expandable and adaptable. We’ve shown that we can do a great job with those types of stadiums. Not everything is going to be a Tim Hortons Field or an Investors Field. We can do a good job by taking the stadium and creating a great atmosphere that engages the fans. The issue is where is it and how do we get to that level. You need a little bit of lead-in time to pull it off.

One of the things we did last year was we did a good job of getting clubs going and then we adapted as we went along. We don’t want to do too much of that. First year, you get a little forgiveness for that. We just have to make sure we’re in a good spot (going forward).

You mentioned expansion, so where do we stand with new teams coming into the league?

We have over 20 different regions, cities, potential owner groups that are talking to us. Over time some fall off and time will distill those that are really serious. (But) there are four groups right now that we are really excited about; I’ll say the West Coast, the middle of the Prairies, in (Quebec) and Ontario-based. There are some very interesting plays at large there.

That’s one of those things where the sun, moon and the stars all have to align and then it can happen. That’s the optimist in me, and the glass is always half full in my world – it’s never half empty. I think we’ve got a nice run up to 2026 where we’ve always said if we can be between 14 and 16 teams … that’s very doable by 2026.

Have you set a timeline for making an announcement regarding expansion teams? Or it is just fluctuating at the moment, and when it happens it happens?

2026 should be the ultimate moment of men’s soccer in this country. We should embrace that with everything we can, and then we should use that as a launch pad for taking the sport in Canada to a whole new level. We should be working as hard as we can to have 14 to 16 teams in the CPL (by 2026)… and we should hope that a number of players for Canada at that World Cup spent time in the CPL at one time or another. With a 16-team league, you’d be expecting it to be doing quite well and turning out players for the national team. That would be the expectation.

It’s been less than a year since CPL signed its broadcast deal with Mediapro. How would you characterize the relationship?

I don’t think we could have found a better broadcast partner. They are truly stewards of the game, they’re creative and know their craft, and they elevate the game from the way they cover it. To some degree we were extremely fortunate to find them, but I think you make your own luck.

What are your thoughts on the CPL adding an All-Star game?

I’d love to hear what the fans and supporters have to say about that, because all-star games are very difficult to do, and I think leagues have always struggled on how to do them. It’s gone from being a real reward for the players in any sport to being more of an event.

If we were to do one, it would have to be something that was very entertaining that supporters would want to see happen. It’s very difficult to do (an all-star game) in the season we play in, because of things like our schedule, the Canadian Championship, Concacaf League, the FIFA breaks. We also have to be wary of not running our teams into the ground, so you have to balance the two.

We’re not against the idea of an all-star game, but we’d want to see the proper case for it. We shouldn’t do it just for the sake of doing it. It should have a purpose

Are you happy with the current playoff format? Would you consider tinkering with it?

It’s interesting you ask that. We are getting a lot of feedback from across the country, especially from supporters, and we’ve heard everything from we should do playoffs to don’t get rid of the two-legged final. We are listening to what people are saying, but we have to be careful with it. Any changes we make would have to be done for a reason.

It’s been suggested to me that the top three teams should go into the playoffs. Do we really need a spring and fall table, or are we better off going to a single table? There’s an argument to made that a three-team playoff system means there’s more teams fighting it out right until the end of the regular season.

How happy are you with where the CPL is after Year 1? Is there anything that keeps you up at night?

As good as we’ve been, we can always be better. So, what keeps me awake at night is that there is so many things that we have yet to accomplish. What keeps me awake is we have this massive white board. We can make it up, we’re allowed to. We’re not limited by the trappings of a league that has been around for a hundred years. That’s all great, but it means we’re constantly thinking about how great we can be. We’re not close to be where we want to be, but if you allow yourself to dream a little bit, you can see there is a tremendous amount of blue sky above us. That’s exciting.