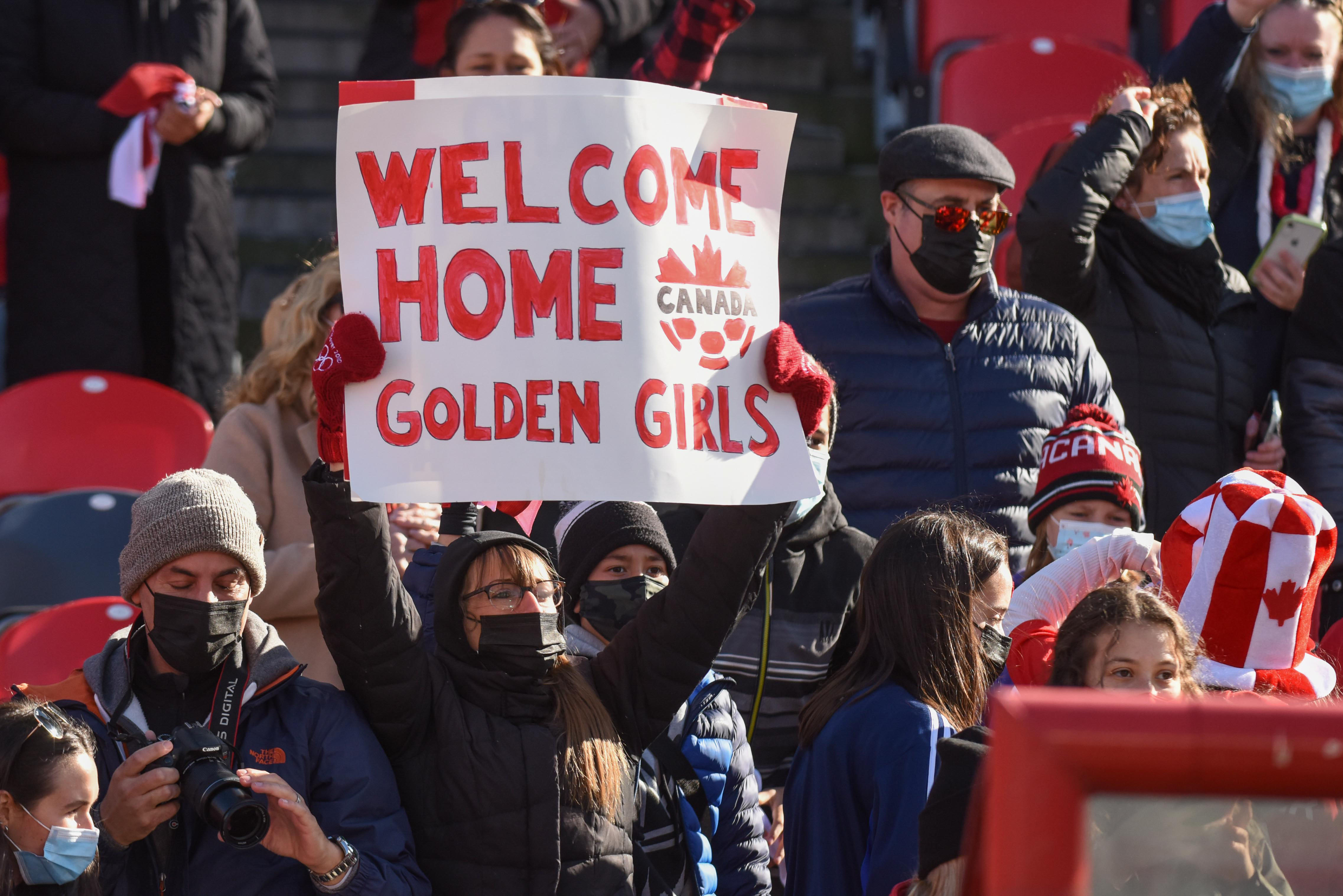 Those famous words from CBC commentator Nigel Reed have been played over and over again by Canadian women’s national team fans since August 6.

They were heard several times again by more than 16,000 fans in Ottawa on Saturday, as Canada played the first match in their long-awaited Olympic gold medal celebration tour at TD Place.

Whether it was that video playing on repeat, or the frigid air in the nation’s capital, it was difficult not to feel chills on Saturday afternoon.

CANADA YOU ARE FINALLY GOLDEN 🇨🇦🥇

Two hours before the match had even kicked off, a sea of red outside the stadium was forming. Flags, face paint, the lot. No matter where you were along Bank Street, there was an eager anticipation that was hard to escape — not that anyone wanted to.

Those who weren’t wearing red were dressed in the club kits of their heroes. Sky blue, claret and black shirts among them, with names like Beckie, Leon and Sinclair on the back.

Packs of young soccer players, perhaps the national team stars of tomorrow, turned up in their own kits as well, many in awe of those on the pitch in front of them.

Saturday was the women’s national team’s homecoming in more ways than one — it was their first match on home soil in just under 900 days — and the fans showed up.

When the pregame waiting was over and fans  had made their way into the stands, players exited the tunnel for warmups to loud cheers — beginning with Canada’s goalkeepers, and led by the newest “National Minister of Defence”, Stephanie Labbé. Her iconic pink headband visible from anywhere in the stadium, the focal point would soon be replaced by gleaming gold.

Just ahead of kickoff there were more standing ovations as the players and staff from the Olympic roster were introduced one-by-one, each with a medal around their neck.

There were cheers for each person who emerged from the tunnel, but none louder than the deafening roar for Christine Sinclair.

The extended salute to Sinclair, the greatest footballer this country has ever seen, felt 20-plus years in the making. “Captain Fantastic”, as Reed often calls her, finally won her major international honour at Tokyo 2020, and was being recognized for years upon years of greatness.

When the ceremonies were complete, ending with fireworks and emotional national anthems echoing around the stadium, there was also plenty to celebrate on the pitch.

Jessie Fleming opened the scoring from the penalty spot, fitting as it was three of her penalties in Japan that helped Canada reach the top of the podium. Christine Sinclair reignited the crowd with a lobbed shot to double the lead before halftime, sending Canada into the break up 2-0.

Throughout the match, there was a buzz in the stadium, the occasion not lost on anyone in attendance. Conversations about the “dominant” Kadeisha Buchanan, “electric” Janine Beckie, or the “f***ing cool” Quinn were overheard. Everyone had a story about the household names on the field in front of them, or their memories of watching the team over the past months and years.

After the break, Nichelle Prince and Adriana Leon (twice) scored en route to a 5-1 victory — a dominant display against a formidable opponent, and extending the celebrations long after the final whistle.

The final score didn’t really matter — it never would have — but judging from the smiles on the faces of people spilling back onto the streets of Ottawa after the match, 5-1 will do just fine.

After the game, the team did a victory lap around the pitch, saluting the fans in attendance, and being showered with praise themselves. As both sets of unused substitutes did sprints up and down the pitch, or played 5-a-side games to begin preparations for Tuesday’s rematch in Montreal, the Canadian players stuck around — taking photos and signing autographs as the sun began to set in the background.

The two teams head to Montreal next, to play each other again at Stade Saputo in the second stop of the gold medal celebration tour.

Fans will celebrate the historic victory in Tokyo for a very long time, and rightly so. Saturday’s game in Ottawa was just the start of something very special, for a very special group of players. In the future it will be looked back on as a series of “where were you when” moments from coast to coast.