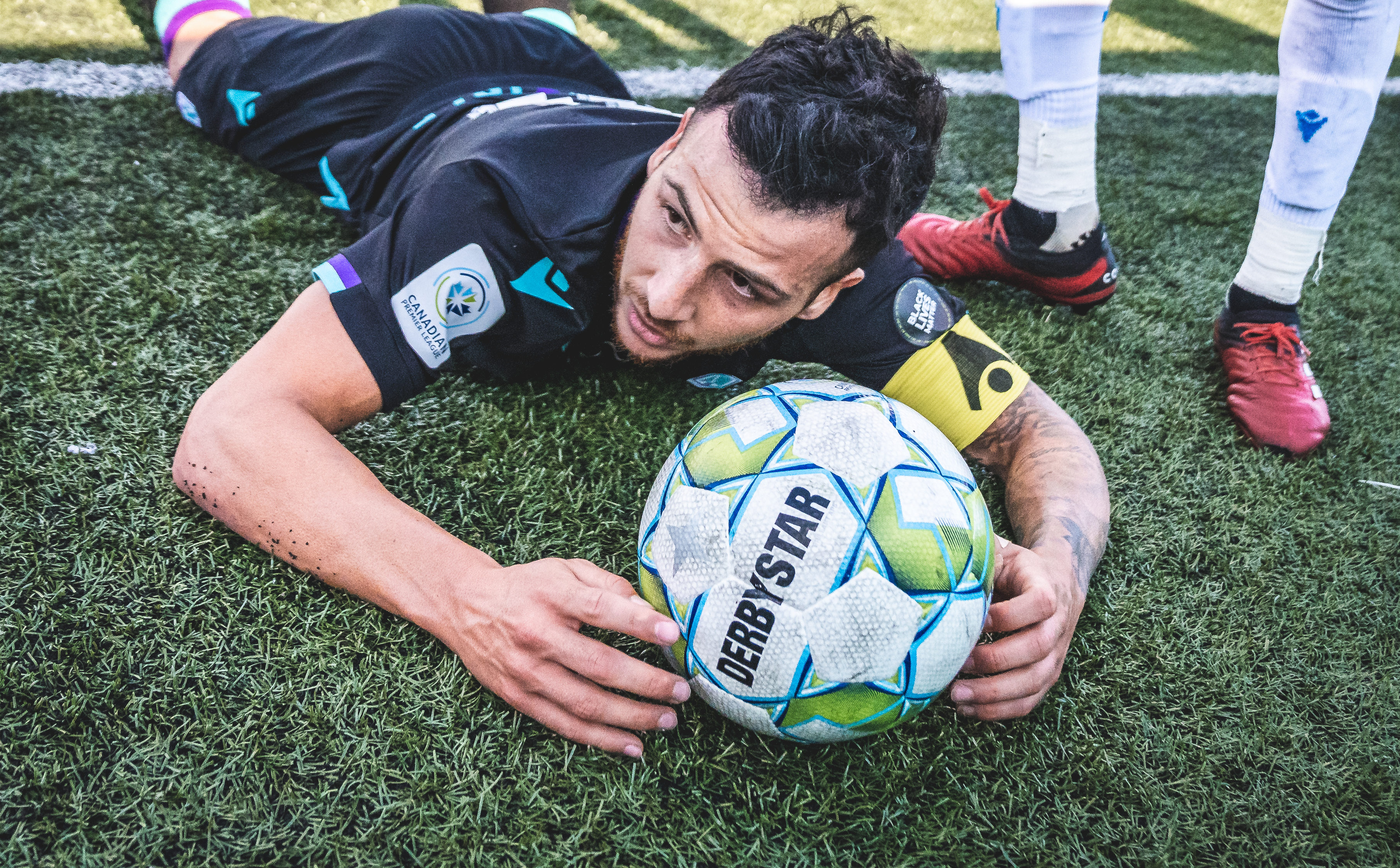 Seventeen. That’s the number of returnees Pacific FC have on their roster from a season ago.

After a fourth-placed finish at the Island Games, and a season from Marco Bustos worthy of a Player of the Year nomination, the Tridents are looking to improve again in 2021.

Led by head coach Pa-Modou Kah, the club have brought back Bustos, and other stars including Kadin Chung and Terran Campbell, as they go for a North Star Shield. They have 23 players signed already, but with Emil Gazdov out on loan in Germany, and Duran Lee out for the season with an Achilles injury, there’s still some room to add.

Here’s how the roster is coming along on the Island:

Pacific have two goalkeepers who could be regular starters in this league, Callum Irving and Nolan Wirth.

In 2020, Irving took the starting job from Wirth during the Island Games, playing six of the club’s 10 games after Wirth started the season as the number one. It proved to be a good decision, as Irving was nominated for Goalkeeper of the Year award, ultimately losing to Forge’s Triston Henry. He picked up one clean sheet in that span, a 2-0 win over Valour in his debut.

Wirth was a regular in goal for the club in 2019, sharing starts with Mark Village. In 2019, Wirth made 13 appearances, with one clean sheet, before making four appearances in PEI. He also had a clean sheet in 2020, in Pacific’s 5-0 mauling over HFX Wanderers.

Whoever Kah starts in goal, Pacific should be solid at the back, and giving both regular minutes and a chance to compete for starts would only be a good thing.

With the exception of Kunle Dada-Luke (and Duran Lee, but he won’t play in 2021 after suffering a ruptured Achilles tendon), Pacific’s group of defenders is entirely made up of players re-signed from the 2020 season.

They’ve lost Canadian international left-back Marcel de Jong, who retired in the offseason, but for the most part this group remains intact. That familiarity will be very useful for Pacific, as most of the players have a season together under their belt, or in some cases two.

Last year, the primary centre-back pairing was Thomas Meilleur-Giguère and Lukas MacNaughton, a duo which will likely be the same entering this season.

Meilleur-Giguère, 23, played every minute of last season, establishing himself as one of the league’s best defenders, and earning himself a call-up to the Canada U-23 squad for the Concacaf Men’s Olympic Qualifying Championship in March. He unfortunately didn’t end up taking part in the tournament, as he had to pull out for medical reasons. In 10 appearances in 2020, he led the club to two clean sheets and a fourth-placed finish at the Island Games.

McNaughton, 26, has been with Pacific since the inaugural 2019 season, and and played eight of those ten games alongside Meilleur-Giguère. He has played 30 times in all competitions for Pacific, most of them starts, scoring three goals. That TMG-McNaughton duo could be one of the best in the league over a full campaign.

At right-back will be the club’s first-ever signing Kadin Chung. He formed a lethal partnership in 2020 with Marco Bustos down the right flank that was dangerous offensively, and solid defensively. Chung is one of the league’s best full-backs, and with Bustos returning for another year, that duo could be in for another big season. In 34 games with Pacific over the past two seasons, Chung has scored once and assisted three goals while racking up a lot of minutes. He played 2,032 minutes in 2019 alone, to go along with 766 in 2020, and should be a regular again in 2021.

With de Jong’s retirement, the spot at left-back is up for grabs.

25-year-old Jordan Haynes is likely the frontrunner to be the starter after performing well in PEI. Haynes played eight times, making that spot his own. A former Canadian youth international, Haynes is highly rated by Pacific, with Pacific FC CEO Rob Friend calling him one of several “important pillars of the club” in a press release announcing his re-signing.

Also in contention for minutes in the backline are Kunle Dada-Luke and Abdou Samake.

Dada-Luke joins the club from Atlético Ottawa, where he didn’t make an appearance in 2020. He’d previously played in the Toronto FC Academy and for Toronto FC II, as well as a spell overseas at Danish club FC Helsingør, where he also didn’t make an appearance. Able to play as a winger or fullback, his versatility could prove to be very useful for Kah. Having played so few games, he’s something of an unknown commodity, but as one of the club’s under-21 players, expect him to be given some minutes in 2021.

Samake was with the club last year, making three appearances, after a successful university career at the University of Michigan. He only played 88 total minutes in 2020, but the 24-year-old will be an important backup to McNaughton and Meilleur-Giguère in 2021.

Like everywhere else on the pitch, there is a lot of familiarity in Pacific’s midfield.

The big splash in midfield is bringing in Manny Aparicio on a multi-year contract from York United (formerly York9). Aparicio, 25, spent the past two seasons with The Nine Stripes, serving as their captain, while quarterbacking their attack. His leadership, as well as his offensive abilities, meant he was sought-after with his contract at York expiring, and the Canadian chose to go to Pacific. The Tridents were in need of a central attacking midfielder, to increase their goalscoring chances even more, and there aren’t many better in the league than Aparicio, who scored four goals and assisted a pair in 37 appearances with York. He has scored some memorable goals during his time in the CPL, including this one against his new club:

#2 in the CPL Top 10 Goals of the season countdown goes to Manny Aparicio with the goal that made the ESPN Top 10#CanPL pic.twitter.com/fAvhw2kcEN

The other newcomer to the midfield is former Simon Fraser University attacking midfielder Matteo Polisi. The 22-year-old BC native scored 36 goals and added 18 assists in 52 games with the NCAA Division II school, and he was described by head coach Pa-Modou Kah as “technically good and has a nose for the goal” in a press release.

Dixon will be a leader in the middle of the park, and to go along with that expectation was recently named club captain. He played nine times in 2020, his first season in the CPL, and captained the side on three occasions.

Few have made more appearances for the club than Baldisimo. The 23-year-old was recently called up to the Philippines national team, and will have that extra bit of motivation to play well, and build on his past two seasons in the CPL. He’s made 34 appearances for the club in all competitions, including all ten at the Island Games, picking up a single assist in that span. He is strong defensively, and will be an important figure in central midfield.

Dixon, Aparicio, and Baldisimo are expected to be the three starters in the middle of the park.

Blasco has been a standout for Pacific over the past two season, scoring seven goals and five assists in 35 league matches. The Spaniard scored two and assisted two in 2020, playing all ten matches.

Heard, 25, joined the club ahead of the 2020 season from Real Monarchs in the USL Championship. In five matches in PEI, the Welsh-born player scored once.

Young, a 20-year-old Victoria native, had a breakout tournament in 2020, establishing himself as someone in contention to start matches on a regular basis. He played nine times, scoring once, and liking up well with Chung/Bustos on the right side. He also impressed CanPL.ca’s Charlie O’Connor-Clarke enough to make him his pick for U21 Canadian Player of the Year in CanPL.ca’s way-too-early award predictions.

Hojabrpour is another player who has been with the club since 2019. Still just 21, he already has 34 appearances under his belt, including ten in PEI, two of which were starts. Pa-Modou Kah has spoken very highly of the young midfielder: “Ale is a young player who is taking all steps into the right direction and he is poised to take on an even bigger role with the team in the coming season,” he said in a media release. “He is an example of a young Canadian player who is able to now play at home and develop in our environment.”

Pacific have a lot of very good options in midfield. This group can cause a lot of damage going forward, and is solid defensively as well.

In attack, Pacific have brought back three of their stars, while also adding a pair of international standouts.

Two of their new signings ahead of last season, Marco Bustos and Alejandro Díaz, will be back on the island after successful 2020 seasons.

Pacific’s only international player a year ago, Díaz had a promising first season in the CPL. Playing in all 10 matches, he scored three goals and set up two others, likely winning himself the starting job at striker to begin this coming season.

On the right flank, Bustos’ strong play earned himself a nomination for CPL Player of the Year in 2020, thanks to his five goals and three assists. The biggest free agent name after the 2019 season, leaving Valour for Pacific, the 25-year-old wants to play at a higher level than the CPL, and will be motivated to keep up his good form in 2021.

The third returnee up top is Terran Campbell. Pacific’s all-time leader in appearances (39) and goals (12) in all competitions, Campbell has been one of the league’s best strikers over the first two seasons. His eleven goals in 2019, two back of Golden Boot-winning Tristan Borges are proof of that. The 22-year-old is physical and gets into good spaces, and when he gets a chance, he often buries it.

Bassett moves to Canada from Nuneaton Borough, in the seventh-tier of England. He also played for a few years in New Zealand and Australia, and was once in the academies of Premier League clubs Aston Villa and Southampton. Expectations are high for the English-born Northern Ireland youth international, who had quite the journey to get to Canada…

RELATED READING: Bassett eager to land at Pacific FC after ‘journey’ in England and New Zealand

Dos Santos, meanwhile, joins The Tridents from FC Dordrecht in the Dutch second tier. Between them and Sparta Rotterdam, dos Santos made 23 appearances in the Dutch second flight, scoring four goals and adding two assists, to go along with 11 goals in 43 matches for Rotterdam’s u21 team. A dual citizen in both the Netherlands and Cape Verde, dos Santos is “a young player with good technical ability and potential,” according to Kah.

This attack is deep, with a mixture of physicality and skill. It has the potential to be the league’s best in 2021 if everyone is firing on all cylinders.

Pacific now have 23 players under contract for the 2021 season. With goalkeeper Emil Gazdov out on loan at FC Nürnberg until 2022, and Duran Lee out for the season, they still have two roster spots available to them.

There aren’t any glaring holes — they have recruited in the positions they were weakest in, and have solid depth options all around the park, so this final signing will likely just be the best player available. They have four international spots still, should they wish to take advantage of those.

Whatever they decide to do with the final slots, the Tridents looks very strong ahead of the new campaign.