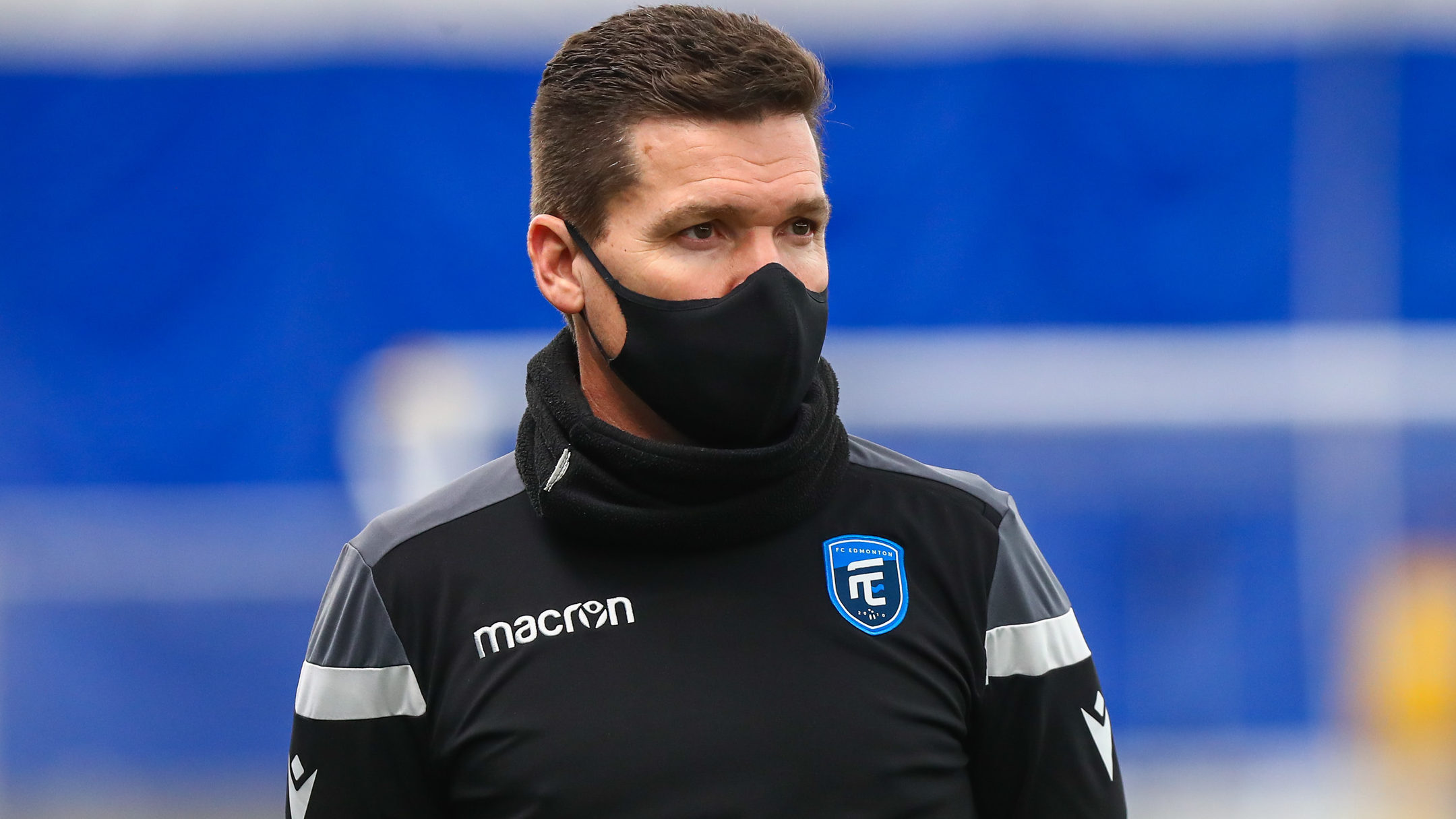 Bringing back eleven players from a year ago, FC Edmonton will be looking to build on a disappointing 2020 season, where they struggled on both ends of the pitch, and picked up just one point in seven matches.

The Eddies still have three roster spots open, including two international spots, to work with, they still have the potential to add more gamechangers to their squad, alongside the likes of Easton Ongaro and Jeannot Esua, or fill out their squad with depth.

For the third season in a row, Connor James will be the starter in goal for The Eddies. James, who was nominated for the 2019 Golden Glove award, has made 28 CPL appearances over the past two seasons, including six of Edmonton’s seven matches at the Island Games. In his 22 starts in 2019, he came away with seven clean sheets after being drafted out of the University of Alberta. The starting spot will be his to lose.

Backing him up will be Darlington Murasiranwa, a graduate of the FC Edmonton academy system. The 19-year-old was most recently with the University of Guelph Gryphons in U SPORTS, and has also played for the Vancouver Whitecaps academy. This will be the first venture into professional soccer for the Zimbabwe-born ‘keeper.

FC Edmonton managed to bring back one of the CPL’s best defenders ahead of the 2021 season in Amer Didic. The 26-year-old centre-back is returning for a third year with the club after establishing himself as one of the league’s, and country’s, best. Good on the ball, and in the air, his impressive play has caught John Herdman’s eye — since joining the club, he’s been called up to the Canadian national team on multiple occasions, and was the first CPL player to score for the national team, scoring on his debut against Barbados in January 2020. He only played three times during the 2020 season after an ankle injury sidelined him in the club’s first game, but he recovered to play the last two before they were eliminated. He’ll be a major piece for his hometown club again in 2021.

Mélé Temguia is also back for a third season in Alberta. The 25-year-old centre-back has been one of the club’s most consistent players over the past two seasons, making 34 appearances across two years. He played all but one of the team’s games in 2019, as well as five of seven in PEI last year, and should be a regular fixture beside Didic again in 2021.

Apart from a stint at the Northern Alberta Institute of Technology, Allan Zebie has been with FC Edmonton since 2012, and will be back for another season in 2021. The 28-year-old was in the club’s academy from 2012-2013 before going to NAIT, and has been involved with the first team since 2015. Including their time in the NASL days, Zebie is in the top five all-time in FC Edmonton appearances, including 28 games in the CPL since becoming one of the club’s first signings ahead of the 2019 season.

After playing all 630 minutes for FC Edmonton in PEI, Spanish defender/midfielder Ramon Soria is also back for another year. Soria joined the club for the 2019 season, making 25 appearances between the backline and the base of midfield. The 32-year-old will be an important piece of The Eddies’ defense once again.

One of the better fullbacks in the league thus far, Jeannot Esua is also returning in 2021. The Cameroonian right back has been a standout for the club thus far, making 21 appearances in 2019 and being named the club’s Player of the Season. He also played in all seven matches in 2020, missing just 13 minutes all season.

Available out wide is Congolese fullback Sharly Mabussi. The 23-year-old most recently played in the fourth tier in France, with Bergerac Périgord FC, and has played as high as the second-tier Ligue 2. Head coach Alan Koch says that Mabussi is “an exciting and athletic fullback,” who likes to attack on the left side of the backline.

As we’ve seen with other teams around the league, having familiarity among your team can only be a positive, and FC Edmonton’s backline have played a large number of games together.

One of the league’s biggest signings this offseason saw FC Edmonton pick up former CF Montreal midfielder Shamit Shome. Shome, an Edmonton native, played for The Eddies in 2016 before being drafted by CF Montreal (then the Montreal Impact) in the 2017 MLS SuperDraft. He’d play 52 times for the club before being released at the end of the 2020 season. He’s also a Canadian international, having made two appearances for the senior side since his debut in early 2020. He has the potential to be one of the best players in the league and will be a driving force in whatever success the club has in 2021.

Also coming from CF Montreal, although on loan, is 18-year-old Tomas Giraldo. A product of the Montreal academy, Giraldo is yet to make a first-team appearance for the club and is moving to FC Edmonton to get his first professional matches under his belt. Giraldo, who was born in Colombia but grew up in Canada, is also eligible for the league’s u21 minutes quota, and should help out FCE in that sense as well.

Another player eligible for those minutes is speedy midfielder 21-year-old Antony Caceres. The Alberta native made his professional debut for Edmonton at the Island Games and impressed enough to have an option on his contract picked up for the 2021 season. He played for the club’s academy, as well as the Vancouver Whitecaps Residency program, and made an appearance in all seven of the Eddies’ matches a season ago.

Chance Carter is the third young, local midfielder at the club, and was the first player brought back ahead of the 2021 season. The 19-year-old from Edmonton took a similar path to Caceres’ — he played for the FC Edmonton academy before moving to the Whitecaps youth system, before returning to his former club. Like Caceres, he also made his debut in 2020 and made six appearances in PEI.

Moving west after two seasons with York9 (now York United) is CPL veteran Kyle Porter. After making 37 appearances for The Nine Stripes across several positions, Porter returns to the club where he spent a couple of seasons a decade ago. Before moving to MLS with D.C. United, Porter played 53 times for FCE in all competitions, scoring 12 goals between the 2011 and 2012 seasons. With a combination of skill, versatility, and CPL experience, expect Porter to play a big role in 2021.

The first player signed under new head coach Alan Koch, USL Championship veteran Paris Gee is also expected to play a big role in 2021. After a stint with Rudeš in Croatia, as well as nearly one hundred appearances in the USL between Tulsa Roughnecks and Saint Louis FC, Gee returns to his home country. The B.C. native spent some time in the Whitecaps academy, as well as a year at Simon Fraser University (where he was coached by Koch) prior to turning pro.

Rounding out the midfield is 2021 CPL-U SPORTS Draft first overall pick Thomas Gardner. The UBC student has signed a U SPORTS Development Contract, meaning he can remain eligible to play university soccer and return to school in the fall semester. This was the third time Gardner was drafted into the CPL, drafted twice previously by Pacific FC, but he is yet to play a game in the league.

Edmonton’s midfield is very young, but a year together to grow could lead to very big things in 2022 and beyond. They’ll obviously be hoping to be competitive this year, but if that doesn’t pan out, they still have a lot to be excited about going forward.

The cornerstone of this FC Edmonton attack will again be Easton Ongaro. The 22-year-old has been very impressive through his first two CPL seasons, scoring 13 goals in 29 matches in all competitions. All of those goals have come in the CPL, where he is tied atop the league’s all-time scoring list, alongside Tristan Borges and Akeem Garcia. One of the league’s brightest talents, Ongaro can score with either foot but is most dangerous in the air — as his six-foot-six frame gives him a height advantage over most of his opponents. After a brief loan spell with Danish side Vendsyssel FF this offseason, where he scored twice in eight matches, Ongaro will be hoping to continue the strong start to his professional career in 2021.

Also returning for a third CPL season is Marcus Velado-Tsegaye. Still just 19, Velado-Tsegaye made 16 appearances for the club back in 2019 after being promoted from the club’s academy, and took the pitch another four times in 2020. He scored one goal in each season, and the attacker will look to build on the past two seasons and try to earn himself a spot in the starting lineup.

Someone more than capable of playing crosses onto Ongaro’s head is winger Fraser Aird. Aird, 26, spent the Island Games with Valour FC, scoring once in six appearances. The former Rangers attacker has made eight appearances for the Canadian national team, and has played most of his professional career in Scotland. He spent the 2016 Major League Soccer season on loan at the Vancouver Whitecaps, where he made 18 appearances.

The other newcomer to the attack is former German youth international Tobias Warschewski. Now 23, he joins The Eddies from FC Phönix Lübeck in the German fourth tier, where he played with new York United recruit Julian Ulbricht. Warschewski has played most of his career thus far in the 3. Liga with Preußen Münster, where he scored five times in 46 appearances across three seasons. He is mainly a striker, who head coach Alan Koch has described as “a versatile forward who is incredibly motivated”

Also signed ahead of the 2021 season is Peruvian winger Raúl Tito. Capable of playing on either wing, Tito signed with the club ahead of the 2020 season, but was unable to join the club due to COVID-19 travel restrictions in the country. He spent 2020 on loan at Peruvian side Santos Nasca, scoring once in eight appearances.

FC Edmonton still has three roster spots open. Another fullback should be among the positions they should look to fill, as cover in case of injury, but the priority for them — as with many clubs — should be adding depth all over the pitch.

They still have two international spots open, as well as the option to sign Jackson Farmer, the defender they drafted out of UBC.