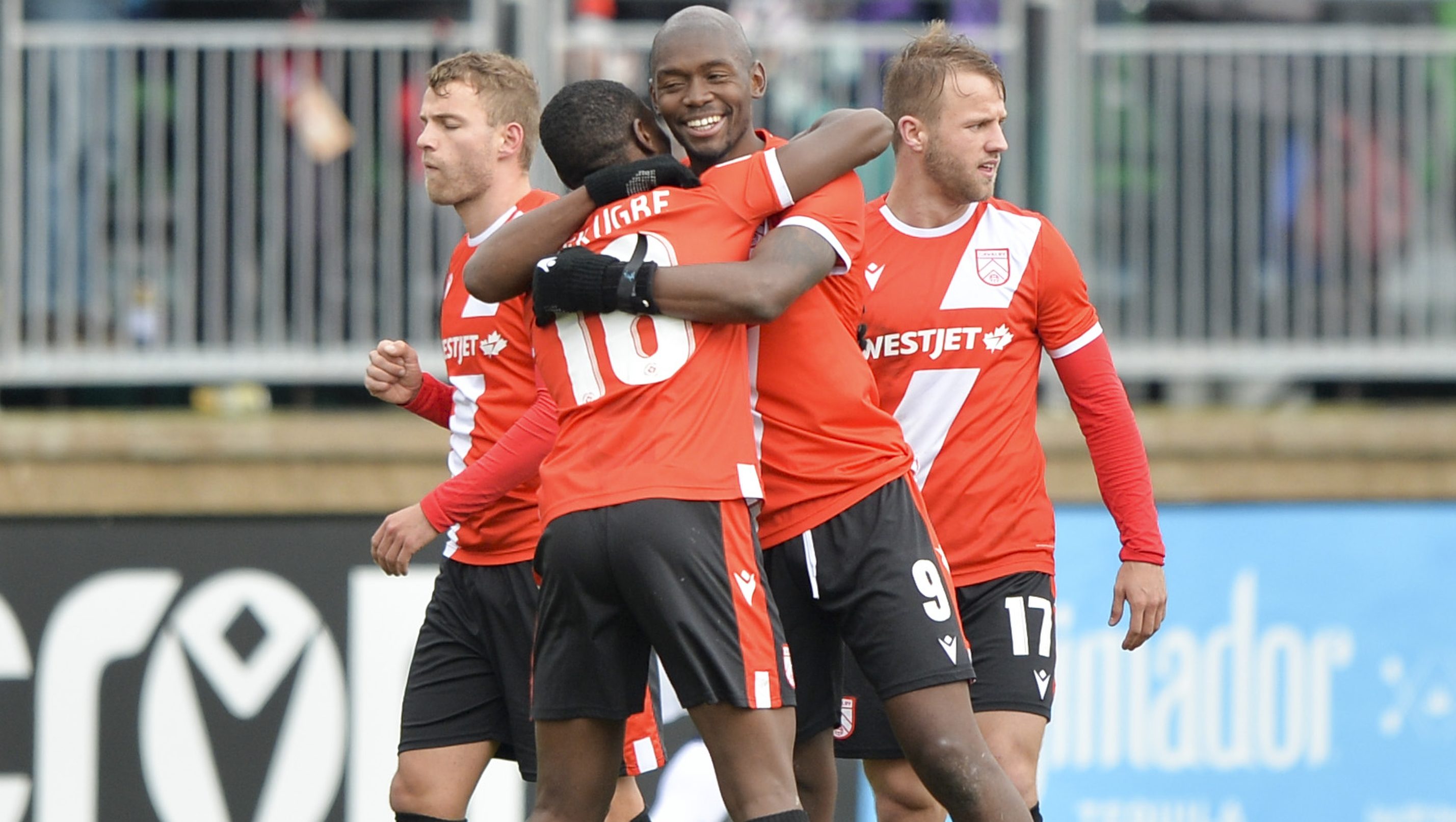 Thirty points. That’s what you get if you go through the Canadian Premier League spring sprint without a loss or draw. Ten games. Ten wins. Cavalry FC is halfway there. On Saturday, I asked coach Tommy Wheeldon Jr. if his team could indeed run the table. His answer?

Why not indeed. Is too early ask… can they possibly do it? No. Not at all.

Can the Cavs do it?

With the exception of York9, the Cavs have already played all of the teams left on the remaining schedule — and won. The toughest one looks to be the next one, at FC Edmonton. The first instalment of Al Classico was a tough-fought one-goal game at Spruce Meadows, and FCE’s size and ability to bully opponents — and willingness to change its playing style — makes the Eddies, at least on paper, the most likely to give Cavalry a run for the money. Of course, the provincial rivalry adds fuel to the fire.

You can argue that Cavalry have to finish with four wins from five on the road. But, Wheeldon’s system — the 90 Minutes of Hell — is portable. No one, absolutely no one, the Cavalry has played so far has been able to comfortably deal with the constant pressure on the ball. Cavalry will often overload on the opposing player who has the ball — he rides one challenge, then turns only to lose the ball to defending player no. 2 on the scene. The high-pace, high-pressure style has confounded many coaches. It should work well away from home, and might even be more effective on the small-as-FIFA-allows York9 pitch on June 26. There is nowhere on that pitch to hide, nowhere to find any breathing room.

What has played into Cavalry’s hands is the stubbornness of opposing coaches to insist their teams still try and play the ball through the press.

If I had a dollar for every time a coach has told me: “We can’t worry about how the opposition play, we have to look after how we play” or some variation on it, I’d own a CPL team, rather than report on the league. But, eventually, if the opposition continues to force turnover after turnover, you do have to change things up based on how the game is going. So far, only FCE’s Jeff Paulus, in the second half of his team’s loss to the Cavalry, showed a willingness to change his tactics, by going direct to try and avoid the turnovers in the midfield.

If the other CPL coaches aren’t willing to change their tactics or game plans especially to deal with the Cavalry press, the wins will continue to pile up for Wheeldon’s men.
Watch Cavalry play, and you know they love to overload the right wing, not only with overlaps but by bringing another player out from the middle to support that side. They want to spring an attacker — Nico Pasquotti, as of late, to get behind the fullback. Cavalry dare the opposition to bring help to their fullbacks, knowing that it will open up gaps in the defensive line. It often feels like the Cavalry have more than 11 men on the field, with all of the overloads in all sorts of unorthodox places. As an opposition coach, you know it’s coming, but you’re helpless to do anything about it.

They have the depth

They lost midfielder Jose Escalante to injury. Didn’t miss a beat. With Nik Ledgerwood is currently out with a knee issue, and striker Jordan Brown starting the game on the bench, Cavalry still beat HFX on the weekend.

And what’s scary is that Wheeldon’s most-heralded defensive signing, Mason Trafford, has yet to play a meaningful minute due to injury. He was on the subs’ bench this past weekend, and to think how much better the Cavalry will be when the former Ottawa Fury and Miami FC man gets into the back four.

We saw in the Canadian Championship, with the Cavalry beating Pacific FC in each leg, that Wheeldon was able to rotate his squad and beat a CPL side that was using a large portion of its “A” lineup.

“We don’t go to say ‘we’re just gonna sneak a point here,” Wheeldon said after the win over HFX on Saturday. “We see ways we can get wins.” Attitude is a big part of a team’s success. After all, earlier this season, the Cavs went into Hamilton, had Forge FC at 1-1 late, and went for it in the final minutes rather than settle for a respectable road draw. It paid off.