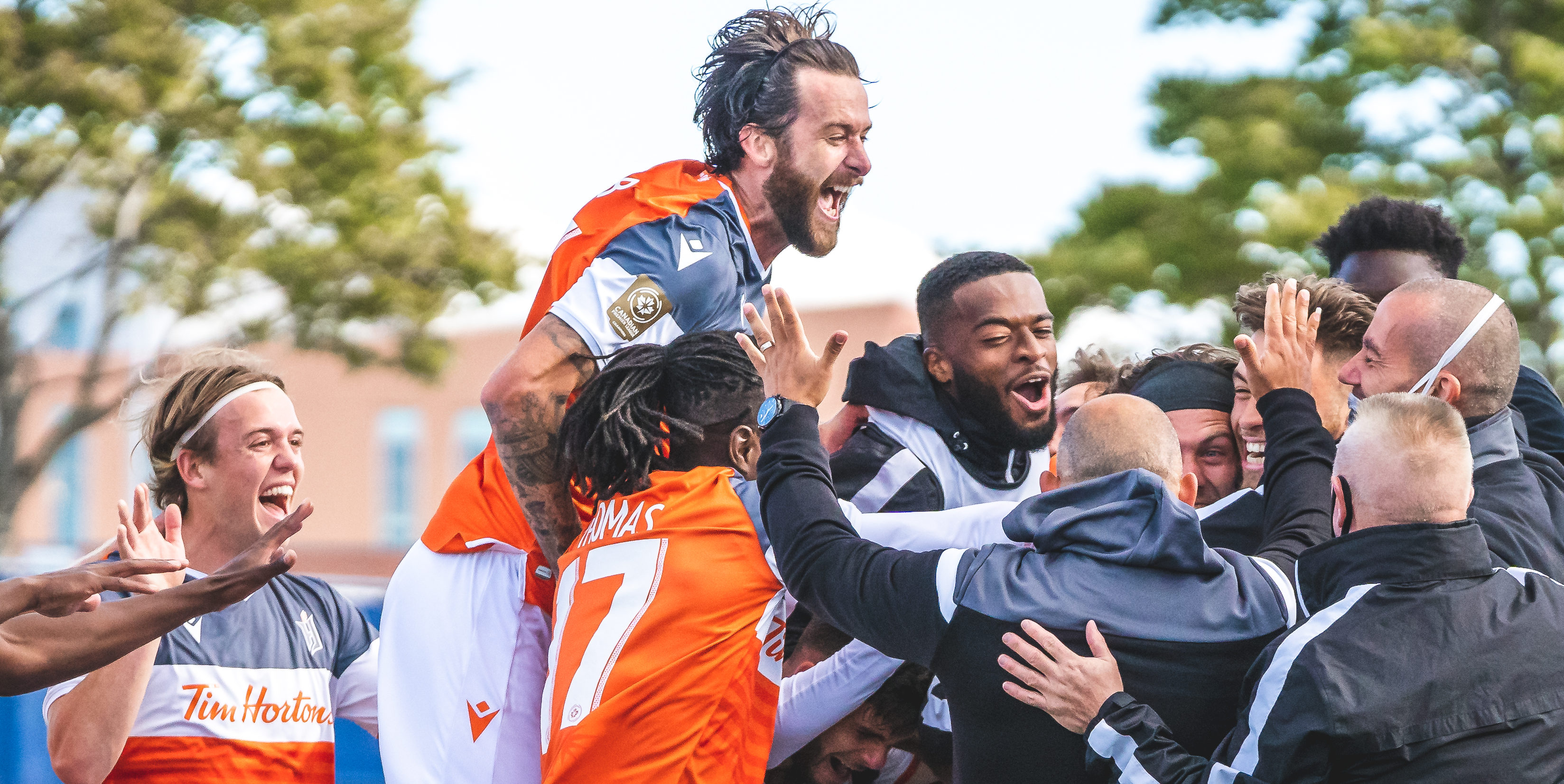 David Edgar and Forge FC celebrate a goal in the 2020 CPL Final. (Photo: CPL/Chant Photography)
Smyrniotis reflects on Edgar’s impact at Forge: ‘He was spot-on from the beginning’
2020-12-07
by
Charlie O’Connor-Clarke, Digital Content Editor (@charliejclarke)

This time, without a doubt, Tuesday night will be David Edgar’s final match as a professional footballer.

The well-travelled central defender will close the book on an illustrious career for club and country after Forge FC’s Concacaf League play-in match against CD Marathón, hoping to finish 2020 with one more accomplishment. There’s a strange irony to the fact that Edgar’s last game will come in Honduras, a place where the longtime Canadian national team veteran has some unfinished business and some demons to exorcise before his retirement.

That’s unlikely to be front of mind, though. The priority, for both Edgar and his Forge teammates, will be securing a Concacaf Champions League spot with a win over a strong Marathón side. Even so, it’s important we don’t allow the occasion to slip by without reflecting a little on Edgar’s career, and perhaps more specifically, the impact he’s had on the two-time CPL champions in his two seasons in Hamilton.

Forge coach Bobby Smyrniotis thought back to the summer of 2019, when the club first brought Edgar aboard. The defender was newly out of contract, having completed his season with Hartlepool United in England.

He signed with Forge on August 2, filling a roster spot left vacant by the simultaneous departure of Emery Welshman. Forge went undefeated in their next 10 league matches after Edgar’s arrival, conceding just seven goals in that stretch.

“We had some early discussions with Eddie, he’s somebody I didn’t really know from before,” Smyrniotis recalled. “I sat down with him in my office, had a good long conversation about what we’re looking to do here, what his role needs to be on the team in coming back to play here. And also understanding the importance of what we’re building. He was spot-on right from the beginning. He absolutely loved it, relished it.”

Smyrniotis added: “I remember his first start was the 1-0 win against CD Olimpia, the second game was a 1-0 win against Cavalry, and then we’re off to Honduras to play in his third start. He got into it quick, and I think the biggest thing is he enjoyed the football.”

From that point, Edgar became an immovable piece of the Forge FC defence, missing just one game in 2020 and four in 2019 (despite the lingering injuries that have now factored into his decision to retire). The club was already rolling by the time he arrived, but his injection into the squad felt like the final jigsaw piece that turned them into the dominant force in the CPL they’d become.

Adding a national team legend who’s played at the highest level in England to an already stacked roster seems, in hindsight, to have been a good clue for what was to come for Forge.

“He’s had a very good career as a Canadian who left this country years ago to try and ply his trade overseas. He’s done an excellent job at that and representing our national team and being an ambassador for what’s going on,” Smyrniotis said.

“With the struggles he had with injuries in the last few years, I think what he’s been able to do here with Forge has been fantastic for him and us at the same time. He’s a player that came in here with a great mentality and a great attitude to buy into the culture that we’re trying to build here, and he’s been instrumental in doing it.”

Smyrniotis suggests that there’s a nice circularity to the fact that Edgar will finish his career playing for Forge FC, representing a city not far from his native Kitchener. As a proud Canadian international who played on the grandest of stages, the final chapter will have been written back at home (although the last few sentences, perhaps, in Prince Edward Island and Central America).

“As a player, if you think about when and how you finish your career I think you’d like to do it by winning two championships in a row, something that he hadn’t done before as a player, and doing it back on home soil in a brand new league,” Smyrniotis said.

As for what’s next? Edgar himself hasn’t given anything away about immediate future plans, although the logical next step would be a move into coaching — which he’s hinted at.

His Forge coach can see Edgar having success in that field, too; apparently, the 33-year-old defender has shown a keen eye and an eagerness to learn in his time at the club.

“He’s obviously got a passion for continuing in the game, in the coaching ranks,” Smyrniotis offered. “He’s always been a guy that’s asked a lot of questions on how we’re doing things in a positive way, and I think that’s been important about what he’s been doing here for the last two years.”

Before Edgar can turn his focus to the long-term future, though, there’s one last challenge remaining on the football pitch — and perhaps one of the toughest.

If he and Forge can win in Honduras, Edgar can add one more line to his list of accolades.