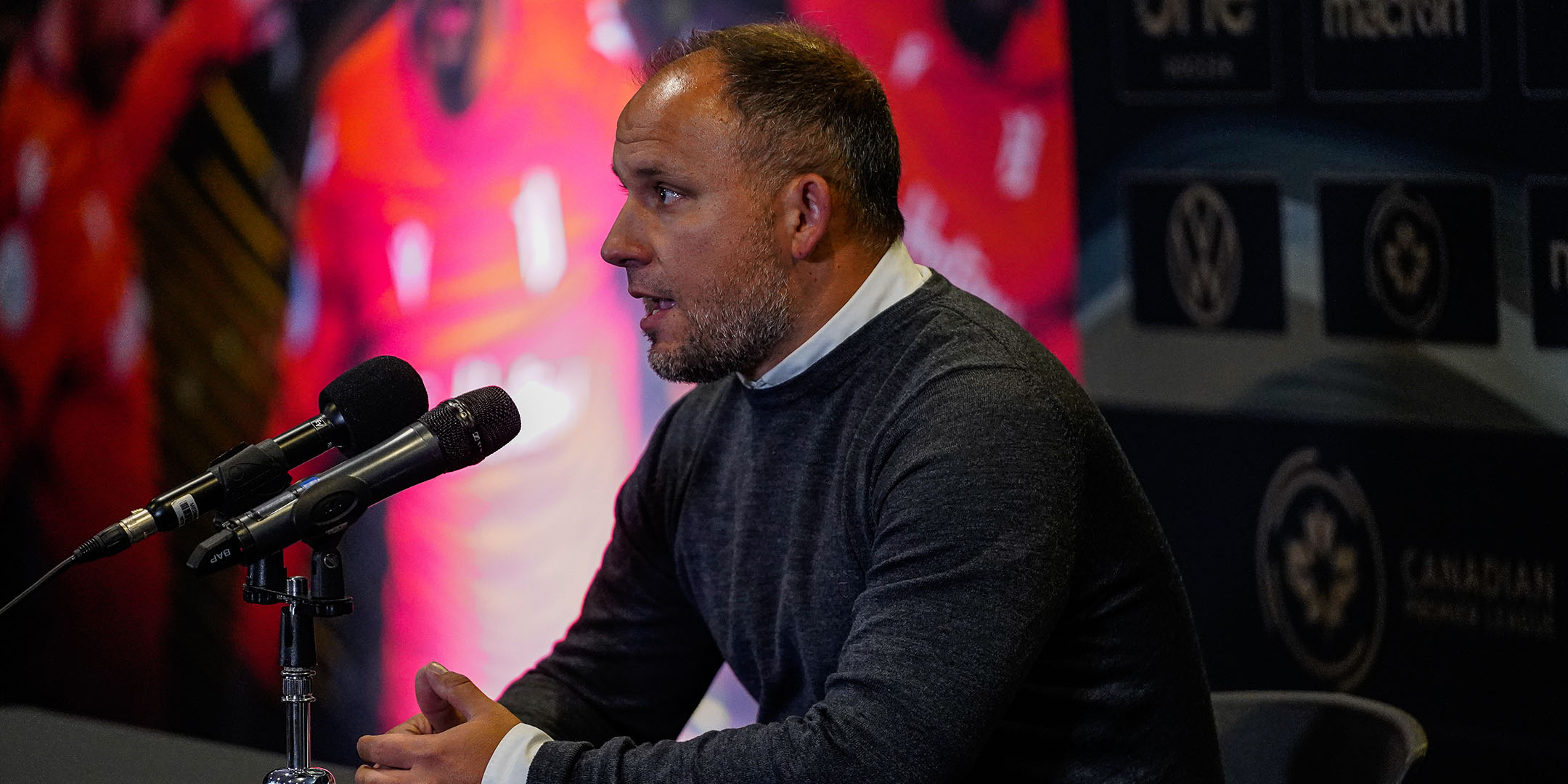 CALGARY – In contrast to the smiles and relaxed atmosphere permeating throughout the Cavalry camp, Forge remain hyper-focused on the task at hand heading into Leg 2 of Finals 2019.

Perhaps it’s a healthy reflection of two contrasting styles of coaching from Tommy Wheeldon Jr. of Cavalry, and Bobby Smyrniotis of Forge; the former, a jovial character, ever laughing at this or that; the latter, all-business, with an emphasis on results, process, and sheer force of will.

As such, Forge enters Leg 2 with a 1-0 lead garnered from Leg 1 … but without the sort of happy-go-lucky approach their opponents carry, whether for better or for worse, right?

“The confidence and mood has been great in camp the past two weeks,” Smyrniotis assured reporters during media day, one day before the match. “They’ve been light about how they’re doing things; they’re focused and know everything they need to do. I think we’ve seen that over the last couple of weeks. We’ve played Cavalry three times in a row to close out the season so we know who the opponent is, we know everything about them. I know they’ll say the same thing on the other end.”

Added Forge midfielder Giuliano Frano: “It’s been very relaxed, actually. We go into practice in the last two weeks, guys are having fun and bugging each other, and in the locker room, it’s the exact same thing. We’re putting the work into practice and being relaxed while we do it. Everyone will have those nerves, but we have faith in each other that we can get the job done.

The variables between the two teams remain a constant; the changes, if any, are in atmosphere and conditions. Smyrniotis knows his Forge team won’t be surrounded by adoring fans at ATCO Field; the shodden, smaller field will change their tactical approach slightly – inevitably – too.

But, everyone is healthy. Bertrand Owundi and Dominic Samuel return from suspension. Tristan Borges’ red card has been waived off by Canada Soccer. Forge FC is as ready as they’ll ever be for a match that Cavalry defender Dominick Zator called the “fight of our lives.”

Ever undeterred, Smyrniotis tempered those emotions, all the same.

“One thing we said was there would be more cameras, more interviews, and more things on social media, but in the end of the day, we’re going to play a game, and that’s what we do best,” he told CanPL.ca. “We get on the field, the guys are relaxed, and when they are relaxed and play their game, they’re fantastic.

Smyrniotis added: “The key priority is to win the game and, to win the game, you have to score a goal,” he continued, referring to the away goal advantage his team can garner, having kept a clean sheet at home. “It’s not so much what a goal means or what an away goal means and all this other stuff you can get caught up in. What we want to do is get the ball together and play some football. That goes a long way, making it a bit more difficult for Calgary.

Would Forge be okay with a 0-0 draw? It would still do the trick, after all …

“We know it’s not in our nature to sit back and absorb pressure, so we have no intention of coming here and trying to hold a 1-0 lead,” captain Kyle Bekker affirmed. “We know if we win this game, we see it out, so we see this as a one-game final.”

Smyrniotis countered: “Two weeks after this, everyone will remember who lifted the trophy and not what happened in the game. The most important thing is we come out of the match tomorrow with a result to become champions.”

In order to do that – becomes champions – Smyrniotis will need to oversee another 90 minutes of football, and do so against a super-confident Cavalry team hoping their home leg brings with it all the magic you’d need to overcome a 1-0 result.

Bekker figures that the confidence his opponents feel won’t matter, in the end.

“We know it’s going to be a good atmosphere,” he offered. “We know they have great support. No question, it’ll be nice and loud tomorrow, but those are the games you want to play in, right? These are the games we dream about when we’re kids growing up – you want the chance to play in a final.

“Sometimes, it’s nice to come in and spoil the party, so that’s our goal.”