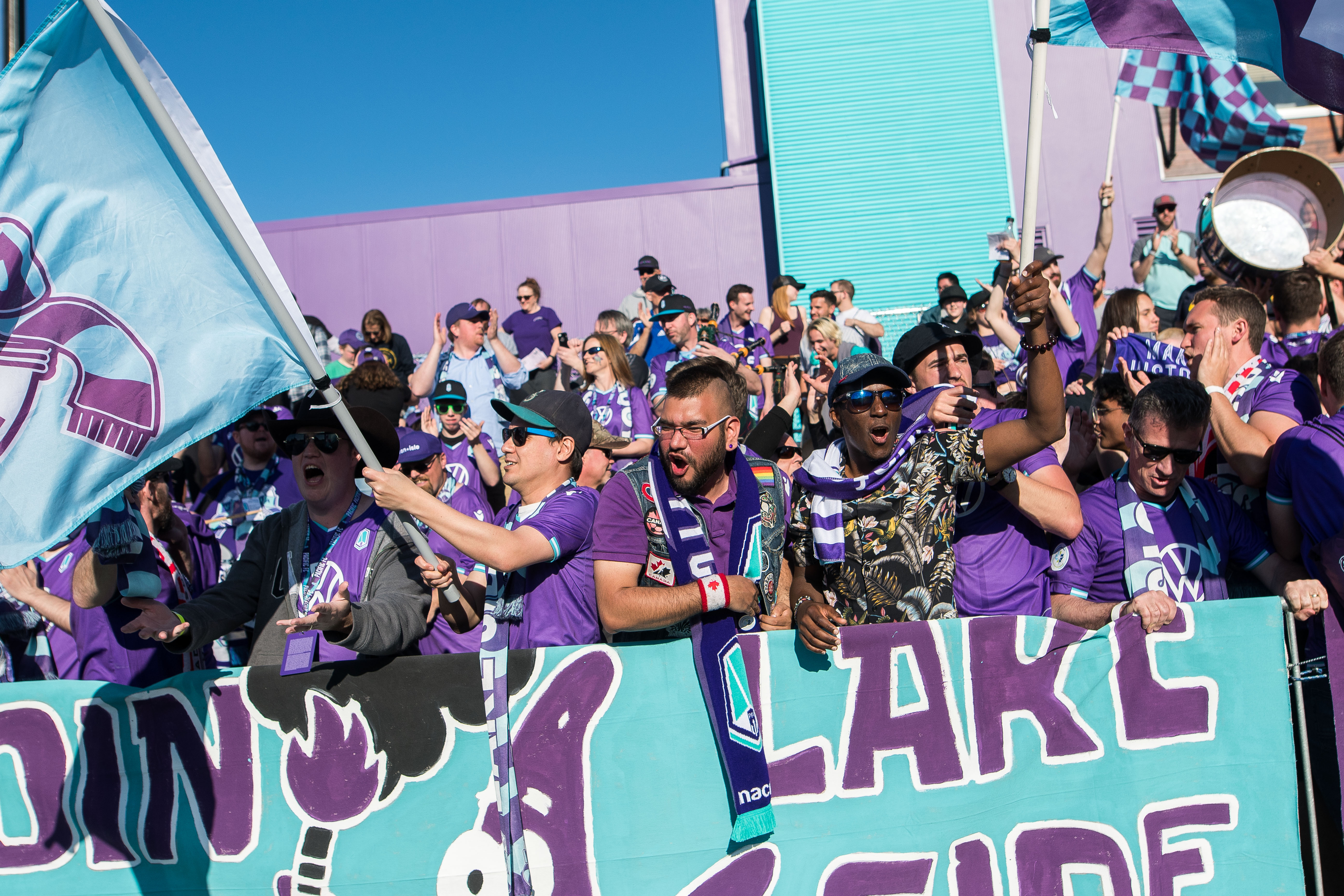 “In 2009, a bunch of people got together at a Highlanders game right here and started a supporters group called the Lake Side Buoys, with the dream of a professional soccer team. Ten years later, we’re here!”

That was the pre-game rallying cry provided by Drew Shaw — brandishing bagpipes while kitted out in a kilt, sporran and Pacific FC jersey — before he led about 100 loud and proud supporters from their pre-game tailgate party into Westhills Stadium for PFC’s inaugural match on Sunday.

With flags, drums, smoke, streamers, banners, and the club’s trademark purple incorporated into everything from hairstyles to twinkly tutus, the pre-game festivities had everything one would expect from such a momentous occasion, including a nearly palpable pulse of anticipatory energy.

Much of that energy was raucously released in the 23rd minute when Hendrik Starostzik scored the club’s first goal, only a few metres in front of the Lake Side Buoys’ home in the east-end stands at Westhills. The momentous goal gave the home side its first win, too, a 1-0 result over HFX Wanderers.

Had the group been in its traditional spot in the west end (behind which sits the “lake” — actually a small pond —they’re named after), they’d have had a much blurrier view of the historic tally. On this day, fate was on their side; not only did they see the goal up close, but it was enough to give their side the first win in Canadian Premier League history.

The Lake Side Buoys’ spot in the stadium isn’t the only thing that’s changed in the decade since the group’s formation. The stadium has grown, the support has grown, and the sport has grown here in a way few have imagined possible.

But Shaw, for his part, is seemingly among those few.

“It’s exactly what I thought it was going to be,” he said after the match, his voice a bit hoarse but his grin extending from ear to ear. “I’m relieved in one sense because I’ve been talking up how it’s going to be so great—but I’m not surprised.”

Unlike many in the stadium, who were likely witnessing a pro game being played on Vancouver Island for the first time, Shaw has been on the scene long enough to remember the Victoria Vistas, the last professional side to make a name on VanIsle’s shores. His in-stadium support for local soccer has carried through various amateur and semi-pro teams over the past two decades, including the Highlanders.

But with a supporters group that once boasted half a dozen members now finding itself a loud and rowdy presence at a pro game being broadcast around the world, Shaw can feel that things are different—and it’s a good thing.

“The end goal (as supporters) is to be replaced by someone else,” he says.

As to who those replacements will one day be, the answers were all around at Westhills — the little boy in Spider-Man face paint beaming as he looked around the sun-dappled field; the little girl in a Canada jersey happily strolling through the stands; the kids clamouring to high-five island boy Nolan Wirth as he made his way up the tunnel at game’s end.

And yes, of course, the purple-clad folks of all ages trying to get selfies with Stewie the Starfish.

The occasion and the atmosphere weren’t lost on Pacific FC manager Michael Silberbauer, a relatively recent transplant to Canada’s west coast after a life and career spent in Europe.

“I’m so happy that all these people came out,” he told reporters after the game. “The whole island has gotten behind us; we’re an island team and we play for the island.”

That’s music to the ears of fans like Shaw, who’ve waited so long to see this team, and this league, come to fruition.

“As long as there’s a team that works hard, plays clean, gives their all and adopts the island lifestyle and lets fans know that they are adopted islanders, this team is going to get all the love from fans from Victoria to Sidney to Sooke to Nanaimo and everywhere in between.”

If Sunday’s showdown was any indication, the “island lifestyle” is going to suit professional soccer very, very well.