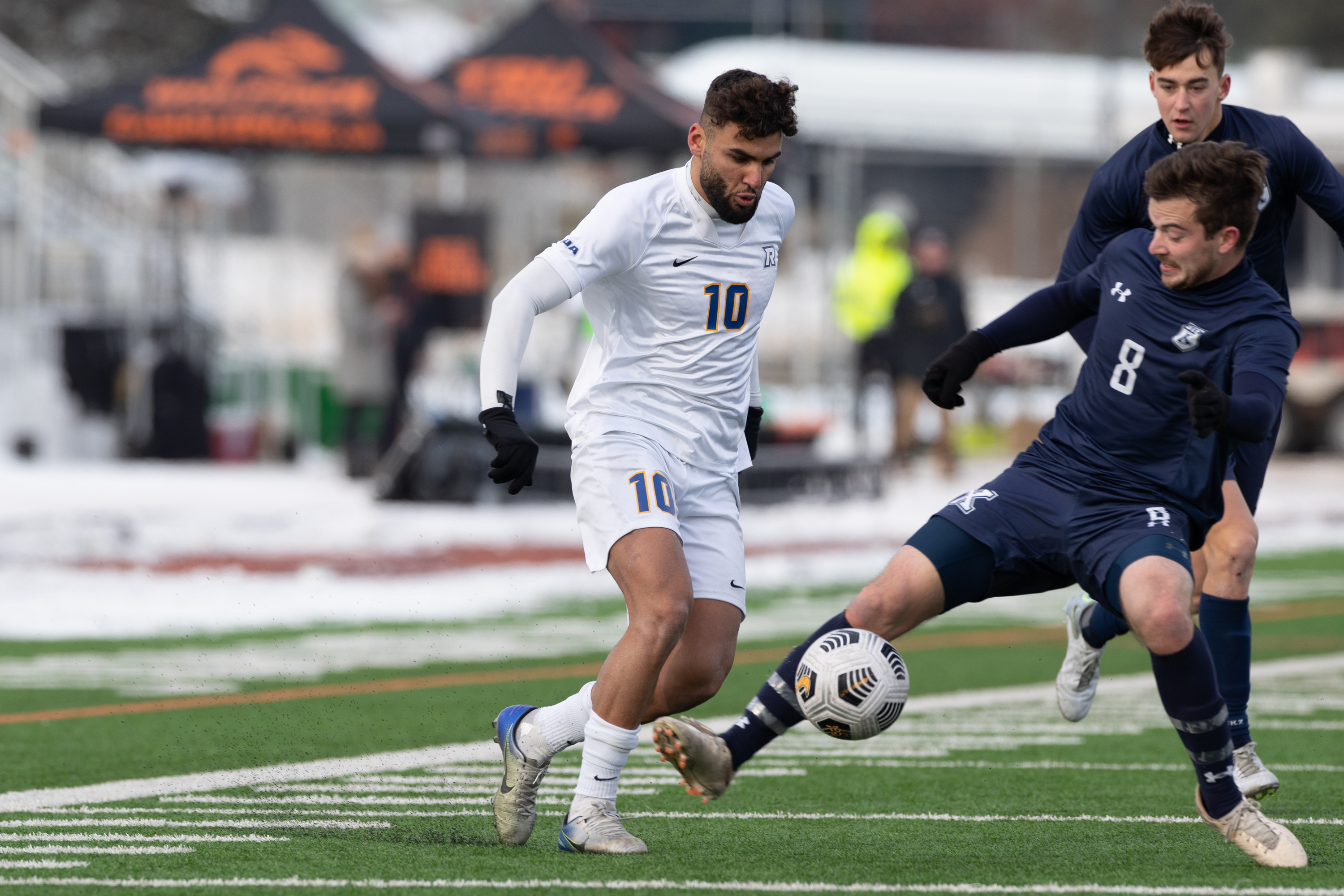 When Ameer Kinani heard his name called as the second overall pick in the 2023 CPL-U SPORTS draft, it began what he hopes will be the latest chapter in an already pretty incredible footballing journey.

The 21-year-old striker was selected by expansion side Vancouver FC out of Toronto Metropolitan University, a special moment, he says, for him and his family.

Kinani comes from a footballing family, as his father played for the Iraq men’s national team from 1990 until 2000, including during 1994 World Cup qualifying.

But when he moved to Canada from Iraq at the age of seven with his mom and his siblings, his dad could not join them for another ten years.

“It was a difficult time, but I stayed focused, to help my family and to continue my dream,” said Kinani.

Growing up in Toronto, Kinani played for local youth clubs like F.C. Emery and Vaughan S.C. Then, in 2008, a video of his highlights he posted on social media caught the attention of the Iraqi Football Association.

Kinani would go on to represent his country of birth at the 2019 U19 Asian Cup. That exposure lead to an opportunity to join Cartagena FC in Spain, where he played for a year and a half.

Unfortunately, as is often a difficulty for Canadian players who want to play abroad, Kinani’s Spanish VISA expired and he returned to Canada.

He played a year for George Brown College, then joined ProStars FC of League1 Ontario. With ProStars, he scored 17 goals during a fantastic 2022 campaign that drew interest and ultimately a move to TMU.

In his first season with the Bold, he helped the team to the OUA final, scoring a match-winning penalty kick against Carleton in the quarterfinals. For Vancouver FC, it was both that onfield success, coupled with the character he has shown off the field, that drew them to pick him in this year’s draft.

“The fact that he’s living his father’s dream; he had to live with his family for 10 years without his dad in Canada, he had to kind of man up and be the father figure in his family in Canada, I was really touched by his story,” said Vancouver FC head coach Afshin Ghotbi. “I’m really hoping that he will succeed, and from seeing him on video, and by talking to him, my gut says that there’s someone very special in Ameer.”

For his part, Kinani is incredibly excited to get to work with a coach like Ghotbi, whose resumé includes time spent coaching the Iranian national team, in the Chinese Super League as well as an assistant with the LA Galaxy, United States and South Korean national teams.

“It is an honour that I get to play and get coached by Afshin,” said Kinani. “Coach Afshin, his CV speaks for itself. He has been all over the world, he has a lot of experience everywhere in Asia, everywhere. He is also an amazing guy, aside from soccer, I spoke to him and he is an amazing guy. He gave me a lot of confidence and I want to thank him for the opportunity and it is an honour and a pleasure for me to be coached by him.”

Spend long enough talking with Kinani, and he comes across as incredibly grateful for all the help and guidance that he has received to get to this point. He ended his interview with CanPL.ca by making sure to thank all of his teammates, friends, family and coaches for their help along the way, in particular, naming head coach Filip Prostran at TMU and John Yacou of ProStars FC. He was also sure to congratulate the first overall pick, and potentially his new teammate, Anthony White.

“I’m very thankful and grateful for this opportunity and I want to thank the people behind the scenes who are working in OUA, League1, U SPORTS and the CPL and all the hard work that they are doing to give a chance to players like me. Even the younger generation and it is amazing. They gave us hope and they gave us everything to continue in this sport and reach our goals, and reach our dreams.”

This thankfulness comes coupled with a team-first mentality, that Kinani’s TMU coach, Prostran, was quick to point out when asked about his game. The goals are what will always catch the eye in Kinani’s game, but it is his ability bring others into the play that makes him such a well-rounded striker.

“My first thing when I’m playing is helping the team, that’s number one,” said Kinani. “Every striker likes to score. But my first goal always is to help the team and get the three points. If I score it is a bonus. If I assist, it is also a bonus. But I always look to help my teammates.”

He is looking forward to arriving in Langley and showing all of these qualities to the Vancouver FC staff. Kinani knows that despite going second overall, nothing is guaranteed but is ready to put in the work necessary to make a strong case for himself.

“The first goal is to make the team. That is my goal right now. That is what I am focused on right now. I take everything step by step, and I try to focus on one thing at a time.”

Should he make that team, however, he believes that the ambitious approach taken by ownership as well as the coaching staff, wanting to be competitive from year one, suits him perfectly.

“Nothing is impossible in soccer,” says Kinani, “I think hard work, staying focus, being committed and disciplined, we can do real damage in the CPL and we can show that we are a team that deserves to win the league and to go far.”