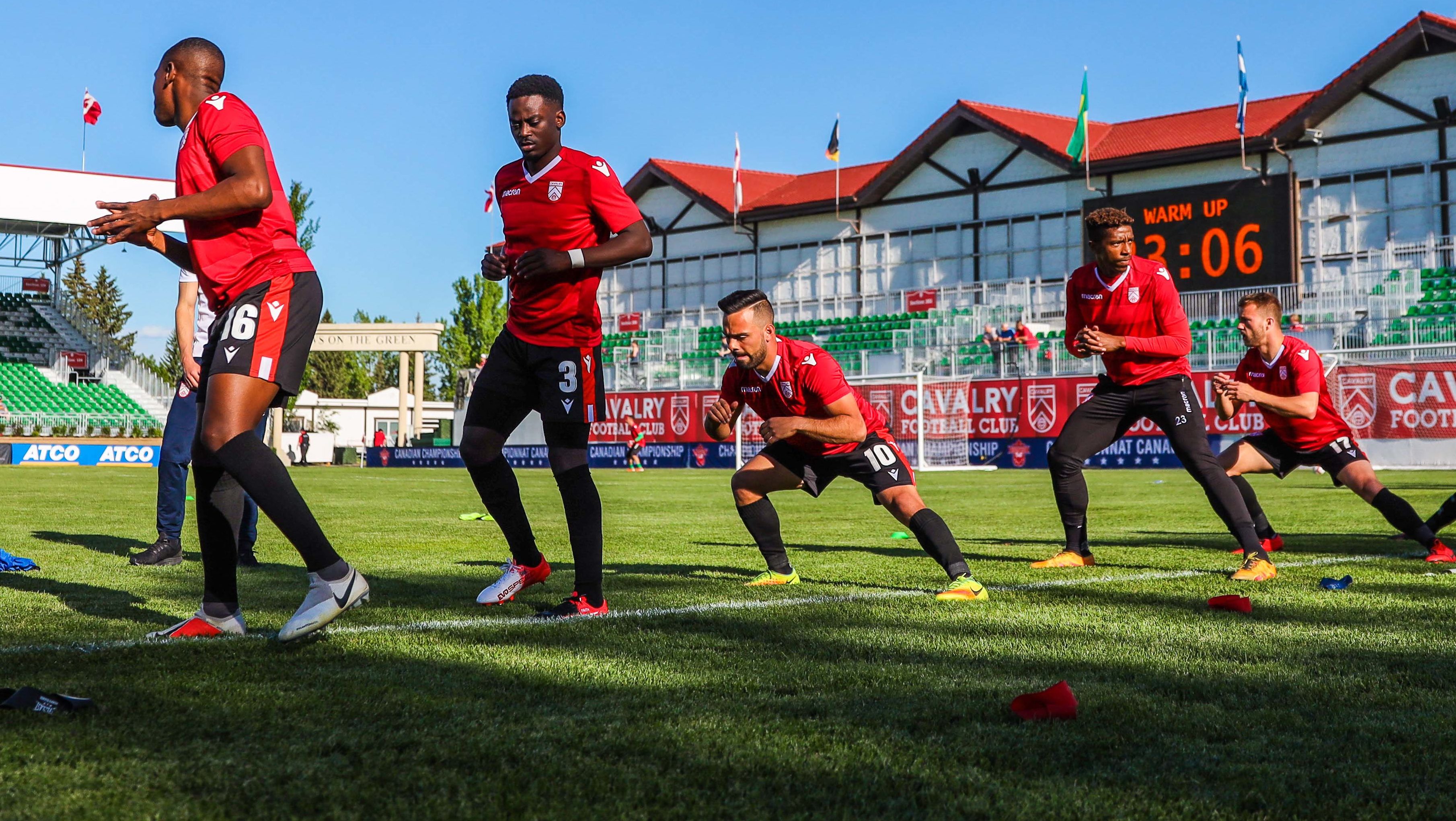 Jun 11, 2019; Calgary, Alberta, CAN; Cavalry FC players warmup prior to a match against the Forge FC during a Canadian Championship soccer match at Spruce Meadows. Mandatory Credit: Sergei Belski-USA TODAY Sports for CPL
To tweet or not to tweet?: Paulus advises players to stay offline ahead of Finals 2019
2019-10-24
by
Steven Sandor, CanPL.ca contributor
Finals 2019 News

That’s the message FC Edmonton coach Jeff Paulus, maybe the most media-savvy of the coaches in the Canadian Premier League, has for Cavalry FC and Forge FC players as they prepare to face each other in Finals 2019.

Paulus’s candor with local media and broadcasters has made his post-game pressers some of the most illuminating in Canadian soccer. And, as a long-time assistant coach with FC Edmonton in its NASL days before moving to the CPL, he’s seen a lot of young players not only develop on the pitch, but have to adapt to the demands of doing media interviews and dealing with becoming public figures.

“The first thing I’d have players do this week is stay off social media,” Paulus advised. “They can hear things that they don’t want to hear.”

Not only is it a distraction, but fans with anonymous Twitter or Instagram handles have no issue becoming keyboard warriors. When a player sees a post or a comment that suggest he might be his team’s weakest link, it hurts. It doesn’t go right by. So, when prepping for a big game, Paulus’s advice is simple — the best way to stay away from the negativity we see on social media is to stay off social media.

But, when it comes to the legitimate obligations, such as media days before the two legs of Finals 2019, Paulus said it offers a time for players to bask in the spotlight.

“I’d tell them to enjoy the experience. Have fun with it. There are so many players who don’t get an opportunity to play in a final like this throughout their entire careers,” Paulus said.

At the same time, while players should have fun, he warns that they should know what not to say. Developing as a footballer isn’t just about passing and shooting and dribbling. It’s about how you deal with the media. And players need to learn from day one how to best conduct themselves.

As a media member, I can say we love it when a player tells us something juicy or explosive. But, some of the best things a player can tell us is the kind of stuff that might spur his coach to arrange for a one-on-one meeting afterwards.

“Players need to be aware that every time they speak to the media, every time the players are stepping in front of the camera, they are selling themselves,” Paulus stated.

And, if a CPL player hopes to attract the attention of a larger club, he has to prove he can deal with media pressure. That he can be classy in front of the lens. He doesn’t have to be the world’s best quote, but he does need to portray that he’s ready and willing to meet the press.

But don’t get carried away.

“If you say something daft, is it something that will be put up in the other team’s locker room?” Paulus asked. “Is what you said going to be just the thing that brings that little something extra, that extra edge, out of your opponent?”

So, not a good week for Cavalry players to be calling out Forge opponents and vice versa.

Paulus said that many young players may have played in big U Sports games or PDL finals or League1 Ontario matches, but the pressure doesn’t match the first CPL final. And they need to understand the fickle nature of the media, as well. You might score in one game and you get questions in the post-match presser. The next game, no one in the media wants to speak to you afterwards. It’s a roller coaster.

And the media is into a lot of instant gratification. That is, we’ll seek out the goal scorer for the big post-game quote, or the goalkeeper who saved a penalty, rather than the holding midfielder who absolutely blew it out of the water when it came to Opta stats.

The media is a fickle animal. And, as CPL moves into its final two weeks, a major test for so many young players is underway. It’s not just about how they do on the field, but in the public eye.