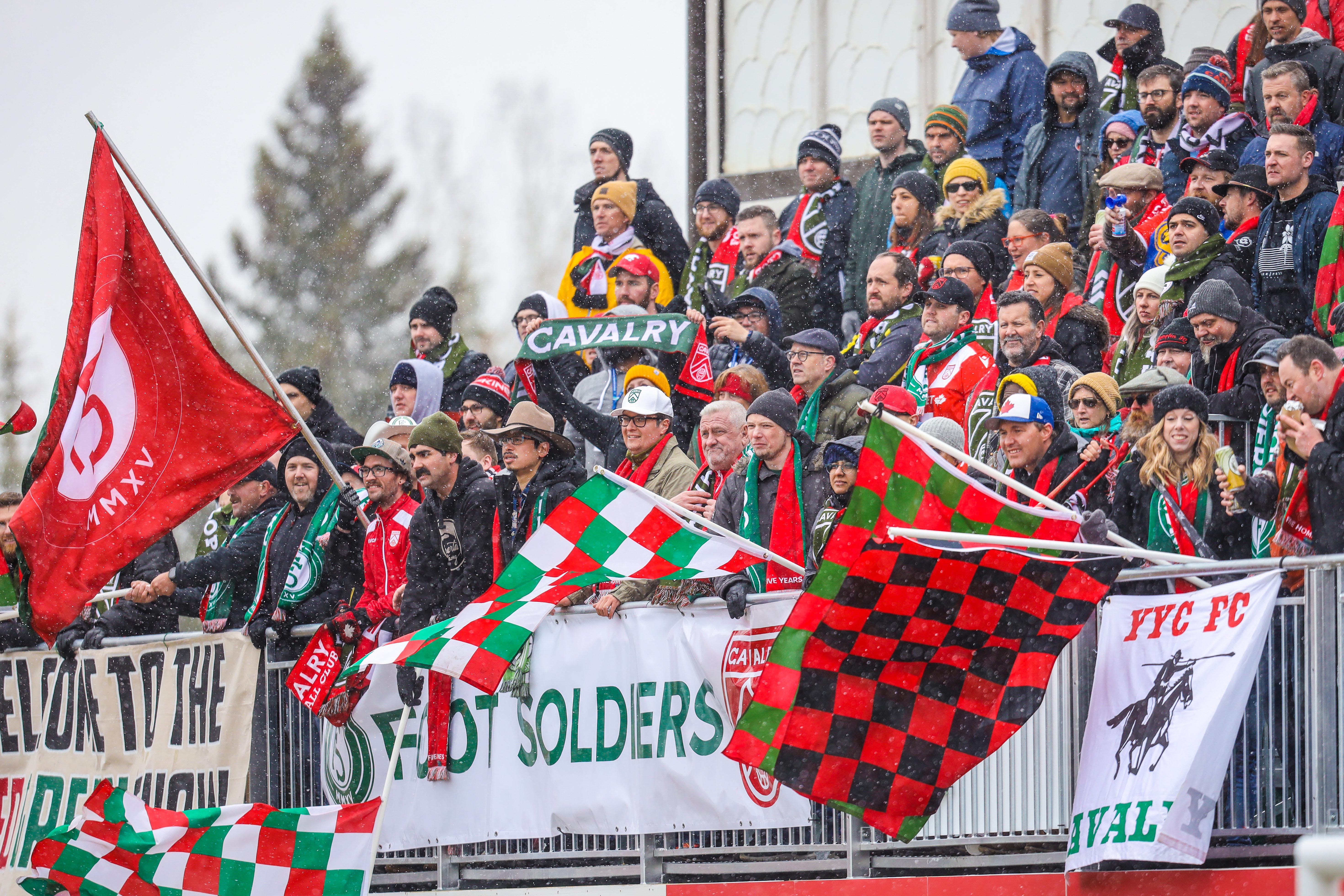 Piotr Stepien grew up in Toronto, but he’s a diehard Cavalry FC fan.

He previously worked as an usher at BMO Field and was a Toronto FC season ticket holder. However, when he moved to Calgary and the Canadian Premier League was announced, it was an easy transition for him to become a Cavs supporter.

For Nicole Grenon, becoming a Cavalry fan was more personal.

“I watched the University of Calgary men’s soccer team and Calgary Foothills FC, as my sister’s boyfriend, Dominick Zator, played on both,” she explained.

When Zator signed with Cavalry, she naturally started to support them: “After going to the first game and seeing the atmosphere of the stadium and the energy of the fans, it was very easy to keep cheering for the Cavs.”

Adam Zimmer, who became a Cavs season ticket holder as a fun activity to do with a group of friends, echoes Grenon’s sentiments.

“Anyone who attends a match at Spruce Meadows can expect a fun atmosphere,” Zimmer stated. “(It’s) a unique venue to watch a soccer match, as the stadium is small and provides a ton of noise.”

All three came to support Calvary FC in different ways, for different reasons, but one thing links them together: the love for their team.

And that love expands beyond the boundaries of ATCO Field at Spruce Meadows, and beyond the borders of Calgary. All three are travelling alongside their team to watch the first leg of the Canadian Premier League Finals in Hamilton, where Calvary FC faces off against Forge FC on Saturday at Tim Hortons Field

“I haven’t missed a home match and I’ve been at the Rose and Crown (a Calgary pub) for pretty much most of the away games,” Stepien boasted.

So, when it came to travelling for Leg1 of Finals 2019, the decision was a “no-brainer.”

“I grew up in Hamilton and my parents are there, so it gives me a chance to see them. Also, a good friend of mine is getting married the same day as the final,” Stepien said.

Not wanting to miss either special occasion, Stepien plans to attend the wedding ceremony at noon, be at Tim Hortons Field for kickoff, and the head back for the reception after the game is over.

“I think I might have to wear my suit to the game with my cowboy hat,” he joked.

For Grenon, while she’s excited to represent in the away section, she is not expecting a warm reception when she arrives in Hamilton.

“I am an obnoxious Cavalry fan who will be decked out in red Cavalry gear and cheering as loud as I can,” she stated proudly.

Zimmer is also looking forward to the atmosphere, but more so, sharing the experience with his friends, Dustin Pivarnyik, Mitch Grorake, and Jerrod Pivarnyik.

“There may be some chirping at us as we will be outnumbered, but it will all be good-natured.” Zimmer acknowledged, before adding, “We have some friends in Hamilton who have become Forge fans, so going to the match with them will be sensational.”

And while all three – Stepien, Grenon, and Zimmer – are pumped for the atmosphere in the upcoming match, they also excited to share their predictions on the outcomes.

However, Grenon anticipates a different score line: “Cavalry will win the first leg 2-1 and the second leg 2-0. In reality, I hope that they win both games 8-0. However, I think they will be two tight games with Cavalry ending up on top.”

Despite the different predictions, these Calvary fans all agree on one thing: travelling Hamilton supporters should prepare themselves for the second leg in Calgary.

“The environment at Spruce Meadows is incredible!” Grenon boasted. “The fans are so loud and supportive of the team. I think Hamiltonians will be very surprised by how loud the stadium gets. They should expect a packed stadium with a lot of very excited fans.”

“What should away fans expect? A party,” Stepien affirmed.

However, Zimmer also offers some practical advice for any travelling Hamiltonians: “I’d also suggest that anyone making the trip bring layers and bundle up. It won’t be nearly as warm in Calgary on November 2.”