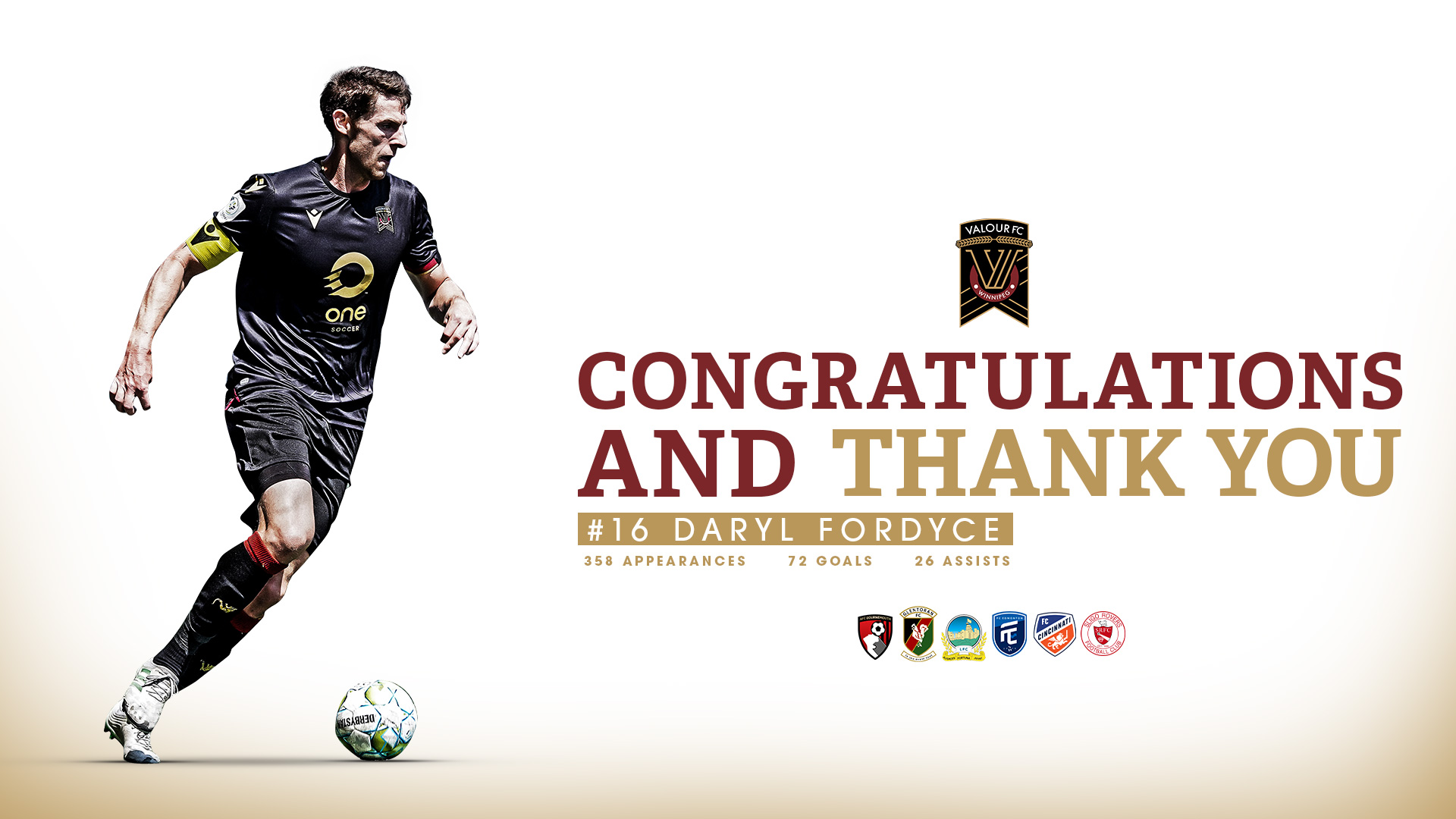 Daryl Fordyce, just like any athlete, knew the day would come. He was ready for it, fully prepared for it and had planned his future around its’ inevitability.

And yet, when the day came for the veteran Valour FC midfielder and co-captain to officially decide to retire from the game, well…

“I was crying my eyes out,” he explained in a chat with valourfootball.club after his retirement became official. “I’ve been a pro for 20 years and so this obviously not an easy thing to do. It was 20 years of emotions from all the mental and physical work I’ve put in and realizing, ‘That’s it.’”

Fordyce, who turned 36 earlier this month, won’t stray too far from Winnipeg and Valour, as he’s been added to the club’s staff in a player development role. That’s a transition he’s been preparing for over the few years as he began earning his UEFA (Union of European Football Association) licences as far back as age 18 while he was with Portsmouth FC. He now has his UEFA ‘A’ licence and will put that knowledge — plus that gained over two decades as a pro — to good use with Valour working with GM and head coach Phillip Dos Santos and his staff.

“In making the (retirement) decision, I had to determine what’s best for me and the team going forward,” said Fordyce. “If Phil wanted to keep me around, I could have been a bit-part player, but that’s not my character – anything I do, I have to be full-in on it. And it’s not the best option for the club if they can bring in a younger, better version of me to make the team go further and I think they can do that. So… that’s how it is.

“Over the last year or two I was always looking at where I was in that moment. I’ve always wanted to stay in the game, for sure, and knew the day was going to come where I would have to retire. Then I was looking at some our results and for me, personally, and I feel it’s best to step away for new guys to come in and bring extra energy and also for me to start a new chapter in my career.”

Fordyce is fortunate in this regard: he wasn’t released or injured and got to call his shot in terms of his retirement. And, again, this wasn’t a decision that came without hours upon hours of deep thought on the subject.

Two tipping points for the likable product of Belfast, Northern Ireland. First, there was the match last summer when Valour was short-staffed at forward and Fordyce suggested to Dos Santos that rookie Matteo de Brienne should start, a decision that effectively put him on the bench.

The other revolves around the old notion that ‘Father Time is undefeated.’

“After playing 90 minutes, for two days afterward I was struggling to get going again,” he said. “If we were regularly on grass, no problem. But the turf pitches make a difference as you get older. I have a kid now and I’d have a day off after a match and I want to take him to the park, to the beach, to his own soccer practice and I was struggling to do that with really sore and tired legs.”

Fordyce’s family is massively important to him. He’s known his wife Christina for years and she’s been alongside him from his stops in England, in Northern Ireland as well as in North America with FC Edmonton, FC Cincinnati and, finally, with Valour. They have found a home in Winnipeg and their son Luka, who turns five in August, will be starting Kindergarten in the fall.

“I’ve been here for three years and I have a love for Valour, there’s no doubt about that,” he said. “I see the progression each year I’ve been here and how close we are to make the playoffs. I’ve seen the fans grow, especially in our last game where it was up to the 5-6,000 mark. I see the high-performance program that has been set up and can grow throughout the city.

“The other thing is my family is happy here. My wife is settled into a job and my son will start school in September. We had moved around a lot before that – in America, Canada, Ireland – over a number of years and it’s not easy packing up and moving around, especially when a kid comes along. This is a perfect scenario and that makes the decision to retire a lot easier.”

Fordyce played in 56 matches during his Valour days, and his importance to the franchise as a player went well beyond the four goals he scored over that span and the leadership he provided. He played an important role in helping build Valour’s locker-room into more of a family environment.

“I’m going to miss being in the locker room and taking some crap from some of the boys as we joke around, but also giving advice to some of the younger guys who might seek it out. I’ll miss that banter. But life goes on and 20 years… wow, it’s gone just like that.

“Now, someone is going to ask me after the first game if I’m going to miss being out there,” he added with a grin. “The answer will be, ‘of course’ but am I ready to move onto something new? Yes, 100 percent. I’m a realist. I know I can give a certain amount on the pitch, but it’s not enough for what the team needs going forward.”