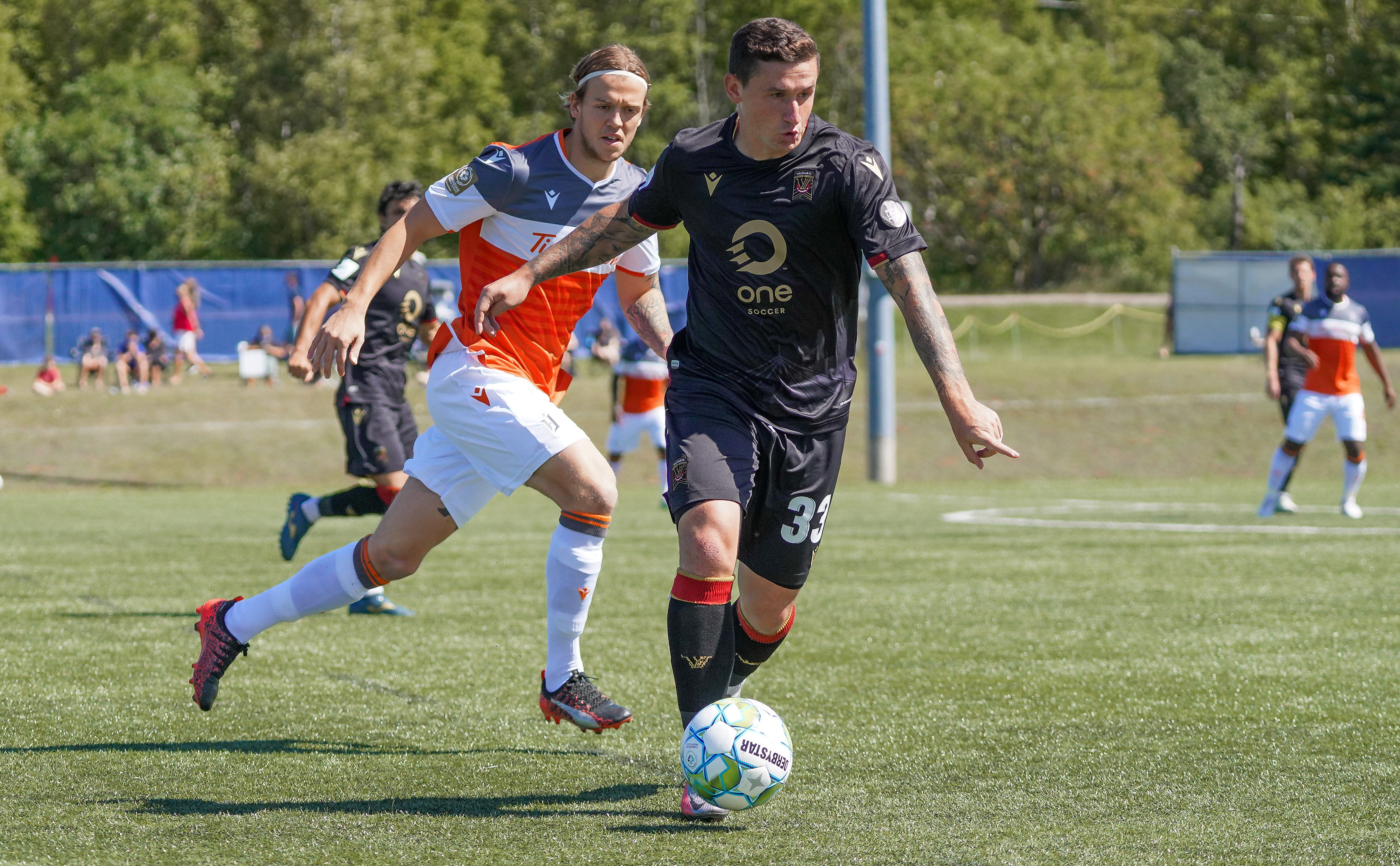 Long before the Canadian Premier League’s Island Games came to a close last weekend, the post-mortem on Valour FC’s second season was being conducted in full.

Hamilton’s Forge FC captured its second straight North Shield with a 2-0 win over HFX Wanderers FC in Charlottetown on Saturday, capping an event that served as the CPL’s second campaign.

Valour FC GM and coach Rob Gale took some small consolation in the fact his club tied Forge 2-2 in its final match of The Island Games before exiting, while arguably its’ most-dominant performance came in a 2-0 loss to the Wanderers in which they thoroughly dominated but couldn’t finish.

And that – Valour’s goal-scoring difficulties were in direct contrast to its vastly-improved defence – was one of many topics broached during a long conversation CanPL.ca had with Gale about the team’s second season and what might be ahead.

Here are the highlights…

KEEPING THE GANG TOGETHER

Still, there was also a sense that the squad was just beginning to play its best football when the first stage ended – a by-product of having just seven returning players from 2019 and no pre-season matches.

Now the issue for Valour management is how to keep as much of this squad together in such a transient profession.

“One season ends and your attention goes to the next one. It’s contract negotiations, renewing options, looking at the areas we need to improve and who we might need to move on from,” Gale stated. “You just get right back on the horse.

“Keeping the core together is a battle for a couple of reasons. But No. 1 is no player wants to stay on the same salary and it’s a salary-cap league.

“I’ve talked to coaches in the USL and other leagues and the danger becomes you’re going to continue to pay more money for the same level of player and when you are a salary-cap league you have to be careful not to overpay the market rate without improving. That’s always the challenge.”

Valour has had its ‘exit meetings’ with players following the season and is now determining who they would like to have back, who might move on and who is drawing interest from other clubs. To that end, Gale said he has received inquiries from other teams about centre back Andrew Jean-Baptiste, defender/midfielder Stefan Cebara and attacker Masta Kacher.

“You talk to those players and say, ‘Do you want to come back?’ We had those chats even during the tournament and the overwhelming feeling from most of the guys is they want to come back and have a full season together,” Gale said.

“Obviously not all of them will come back, but it’s our intention in Andrew’s case that unless a higher league comes with an offer that we would have him back. He enjoyed the staff, our style of play and everything about the club. We’re hopeful that at least two-thirds of this current group will be back next year.”

Goal scoring was seen as a potential issue heading to Charlottetown following the departures of Marco Bustos (Pacific FC), Michael Petrasso (York9 FC) and Tyler Attardo (since signed in Cyprus).

“It’s the old saying that defending is more of a science and attacking is more the artistic part of the game,” Gale said. “A good example, though, is look at how (Akeem) Garcia developed for Halifax from Year 1 to Year 2 (eight goals in 28 matches last year; six in 10 this season).

“Maybe we can get the same results from Austin (Ricci) because he’s pacey, he’s strong, he doesn’t give the opposition a rest. The only thing that was missing was the finish and, really, he simply got robbed a few times by good goalkeeping. We hope to continue to work with him and then find that other one who can provide a different skillset and unlock defences.”

Gale hinted on a couple of occasions during the tournament about having a line on a proven goal scorer from Europe. But, alas…

“We think we’ve lost the opportunity with that fellow, unfortunately,” he said. “He signed back in Europe, where he was. He would have been a big, big piece for us for sure with how the tournament unfolded because he’s a big, strong, pacey, physically intimidating at (six-feet-four) who scored regularly.

“That was a disappointment this year in that there were a couple of players we couldn’t bring in because of COVID. But we’re doing our due diligence and working very, very hard right now to try and find a similar piece and a complimentary piece that could score goals as well.

“We know we can move the ball, work the ball and work our opposition well, now we need a bit more killer instinct and luck in front of the goal. Then we feel we’ll be right on the cusp of where we need to be.”

Pantemis will likely be Canada’s ‘keeper in the qualifying for the Tokyo Olympics, Dunn is one of three finalists for the CPL’s U21 Player of the Year, and Campbell gave Valour some decent minutes in PEI.

Whether any of them return for 2021 is one matter, but clearly loan agreements are something the club should continue to explore.

“It’s something the league and all the clubs can utilize for the right reasons – the development of young Canadian players,” Gale said. “For us it’s a way to help develop the Canadian game and young players like Julian, James and Dante. We’ve had discussions with those players about doing it again if possible through discussions with their clubs. They were happy with the results… the feedback from the players and the parent clubs was overwhelmingly positive about our group.

“There’s a desire there from both parties, the players and the parent clubs. Now we’ll just have to wait until the new (MLS) season begins and see how those players stand in the depth chart of their parent clubs.

“You’re only allowed a couple from one parent club and if we could get three or four next year, especially young under-21 Canadians like Julian, it benefits everybody.”

The big ‘keeper started all seven matches in PEI, and finished with two clean sheets and 19 saves – both totals among the CPL leaders.

His potential return to Winnipeg will clearly hinge on the Impact’s goalkeeping plans for 2021 and/or what potential interest there might be for the 23-year-old from other leagues.

Ditto for Dunn, who played every minute for Valour FC.

“Montreal had goalkeepers ahead of him this year under contract,” Gale said. “We’ll see once MLS is in their season where things stand. (Impact coach) Thierry Henry’s first season in the MLS with Montreal was a bit up and down, like everyone, with COVID. He’s got to assess his talent pool and where James sits in that.

“It will be the same with Julian and his status with Greg Vanney (TFC coach) in Toronto. The good thing now is they know the level of our league, of our club. It worked out well this season and there’s no reason to suggest it couldn’t happen again in the future, but it will depend on a lot of offseason business. If Montreal has another big-name goalie come in then will James be in the same situation where he’s needing games and needing minutes.

“Julian could be in the same position with TFC if there are four or five centre backs ahead of him, then we’ll probably be in the market to bring him back in into the Canadian Premier League.”

ANOTHER LOOK AT ARNOLD?

One of the biggest disappointments for Valour FC in PEI was the injury – injuries, actually – to defender Arnold Bouka Moutou. A veteran of France’s Ligue 1, Bouka Moutou was a standout in training, but was injured in Valour’s first match and then injured himself again in the finale.

He turns 32 in November, but the squad would like to see him return.

“He went back to France and got a proper scan there and it was revealed he had a third-degree tear of the hamstring. It was a nasty injury,” Gale revealed. “What a devastating year for him. He came over only to get ruled out one game in. The one thing we know about Arnold after working with him is technically he was our best player every single session during the 1v1.

“He’s a player we’re keen to bring back and let him showcase what he can actually do and hopefully stay injury free because he’s such a talent.”

The club had signed Panamanian defender Amir Soto last winter, but paperwork issues prevented him from getting to Winnipeg. A big, physical centre back, he is still very much on Valour’s wish list for next season.

“We got word about a week after we had gone into the bubble that his visa had gone through, which is something that had started in February,” Gale explained.

“We’re hoping we can get him in early for preseason next year and have him ready for March 1st or whenever we get the green light to go. He’s a Concacaf-level central defender and someone we’d be excited to have alongside Drew (Jean-Baptiste), possibly Julian (Dunn) and a number of other defenders we’ve got our eyes on.”