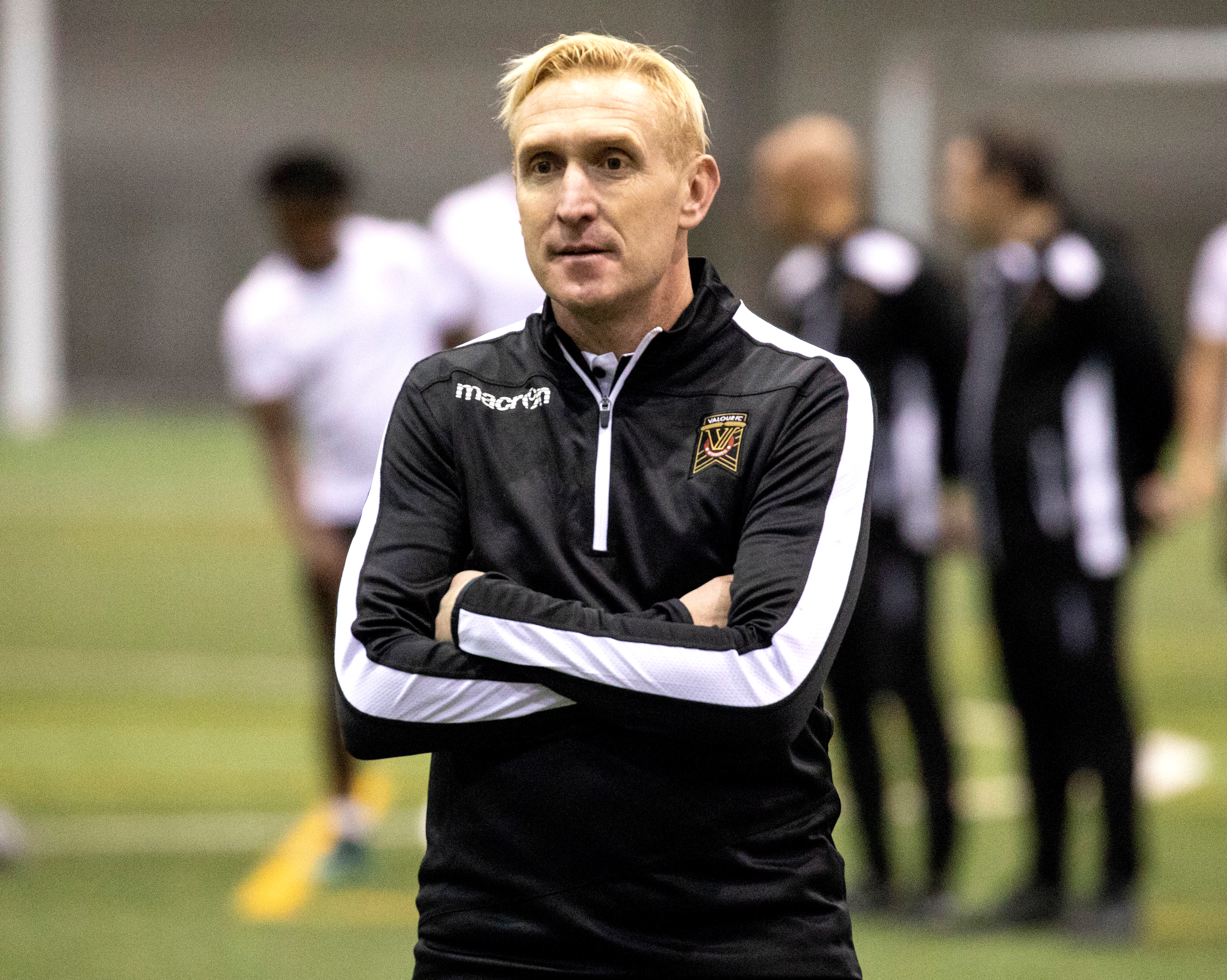 WINNIPEG — Rob Gale is in full-on construction mode, barking orders like a foreman moving around pieces on a building site.

Yet, there are no bricks and mortar, no hammers and nails, just a collection of players stretching behind him following another Valour FC training session.

And Gale, Valour FC’s GM and head coach, is beaming.

“We’re really building something here,” begins Gale, the amiable Englishman-turned-proud-Winnipegger. “These guys, they’re growing, growing as professionals and growing as people. They’re fitting in exactly with what we’re trying to do.

“I’m a big one for romantic comedies,” he added, with a grin and a wink. “So … We’re just like Julia Roberts and Hugh Grant from that scene in ‘Notting Hill’… ‘We’re just a team, standing in front of a province, asking them to love us.’”

Gale has long been the only face of the Valour FC franchise, dating back to his hire last June. He’s been everywhere, selling the Valour brand and promoting the game. Now, after months of planning and working on a blueprint, there are finally players on the pitch.

And as Gale & Co. work to transform this bunch into a true team in advance of their May 1 CPL opener against Pacific FC, valourfootball.club sat down with the boss to get a progress report through two weeks of camp.

Here are Five Takes from the first two weeks…

Gale and his assistants, Damian Rocke and Patrick Di Stefani, can set the ground rules and the daily tone. But any team – particularly a brand new one – needs its players to set a template of expectations in the clubhouse.

“One of the key things early on in the first few weeks are establishing the habits and the processes and building the culture,” Gale said. “We’re starting to see that in place with an internal fine system to keep each other accountable with the players. They’ve taken that on.

“You can feel it in and around the stadium with the lads and how they’re interacting with the staff at all levels. We’re becoming a proper football club. And what I mean by that is there is leadership and no hierarchy. We make sure we respect every member of the team, on and off the field, the people doing the hard work behind the scenes, the people making sure we’re able to come out and play. We’re starting to see that respect and values that we’ve wanted from Day 1 for a club here in Manitoba, to be worthy of the people.

“I’m really happy with the culture building and the players driving that, instead of it being coach-driven.”

And what, you might ask out of curiosity, could a player be fined for?

“Just about everything,” Gale explained, “from leaving a training kit out, shirts hitting the floor, not respecting the logo in the dressing room, lateness is a definite no-no. It’s just good values that any professional sports franchise will have.”

2. THE WAITING IS THE HARDEST PART

Three players already signed to contracts – forward Stephen Hoyle, midfielder Nestor Navia and defender Martin Arguinarena – have yet to arrive in camp. The three internationals are key pieces and are expected soon – Hoyle, for example, is currently playing in the New Zealand ASB Premiership semi-final with Canterbury United DC.

Their later arrival doesn’t make it easy when trying to build chemistry, let alone settle on a starting 11.

“It’s tricky because we’re still waiting on Stephen, Martin, Navia and the two just about to sign – one will come immediately, one is a bit later,” Gale said. “ It’s waiting on those pieces understanding that that’s there.

“I said it last week, but the picture of that jigsaw puzzle continues to become more complete. If we get these two additional pieces over the line, then there are just one or two additional decisions to make. We’re content with how it’s coming along. We’d want it sooner and better and right now, but that’s any coach.” 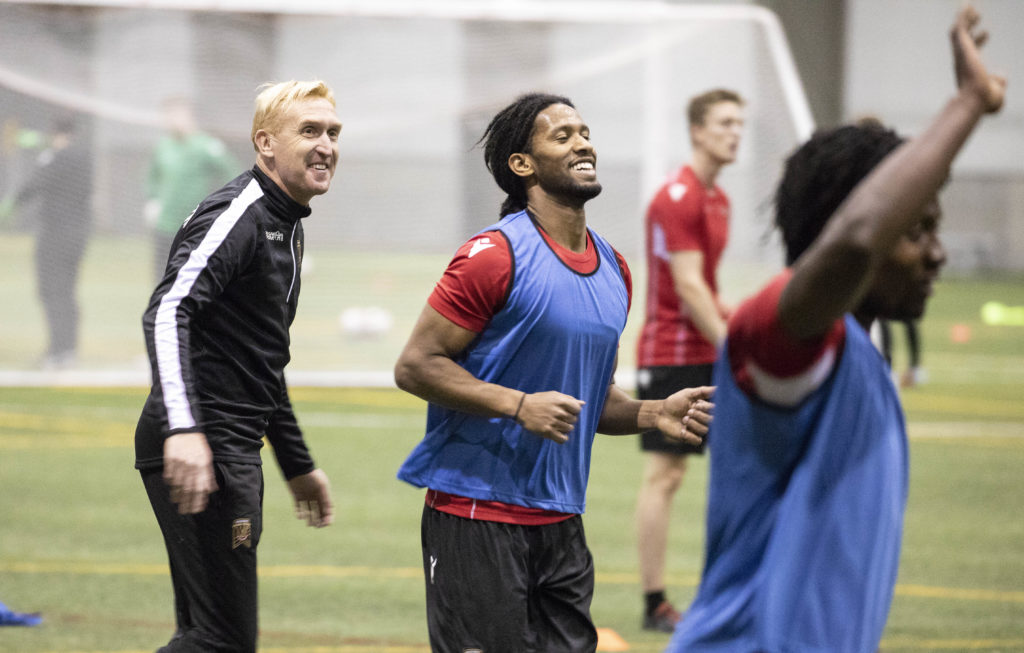 Coaches can only coach and work with what is in front of them. Gale has assembled a solid collection of talent that has the ability to move around the field. That flexibility is key. Plus, Gale explained why he can work around players not being here or not having signed yet as opposed to the other type of football regularly played at Investors Group Field.

“Plus, because the game is so fluid we don’t have registered set plays that they’re going to run all year like football. That’s why you need to build and it’s good we have players that can play multiple positions. As we’ve said before, Rome wasn’t built in a day and neither was the Italian back four.”

Gale has had an association with many of the players in Valour FC camp, either through his gig as the Manitoba Soccer Association Technical Director or in his various coaching stints with Canada’s younger national teams.

He’s noticed an obvious improvement in the younger players’ collective skillsets, but also the simple physical maturation that comes with age.

“I look at a guy like Ali (Musse) … he’s got a lot more upper-body strength and he’s more resilient than he used to be as a young lad,” said Gale. “Back then if he got kicked it might affect him. He’s learned that he’s going to get kicked because he’s a good player. It’s riding those challenges.

“Someone like Tyson (Attardo) … he’s in the best physical shape I’ve seen him in his career. All that’s important because we’re all pros now and the expectations change.”

Asked if there were any surprises – good or bad – through two weeks of Valour FC camp Gale offered this:

“If there’s been any surprise, it’s seeing even more of the leadership qualities with guys like Jordan (Murrell) or Sky (Skylar Thomas),” he said. “They’re even better than I thought they would be. They really have taken that on. I already knew their character, so I don’t want to say it’s a surprise, but they are right on the money.

“Like I said, I love the characters of the people. I love all these lads already.”